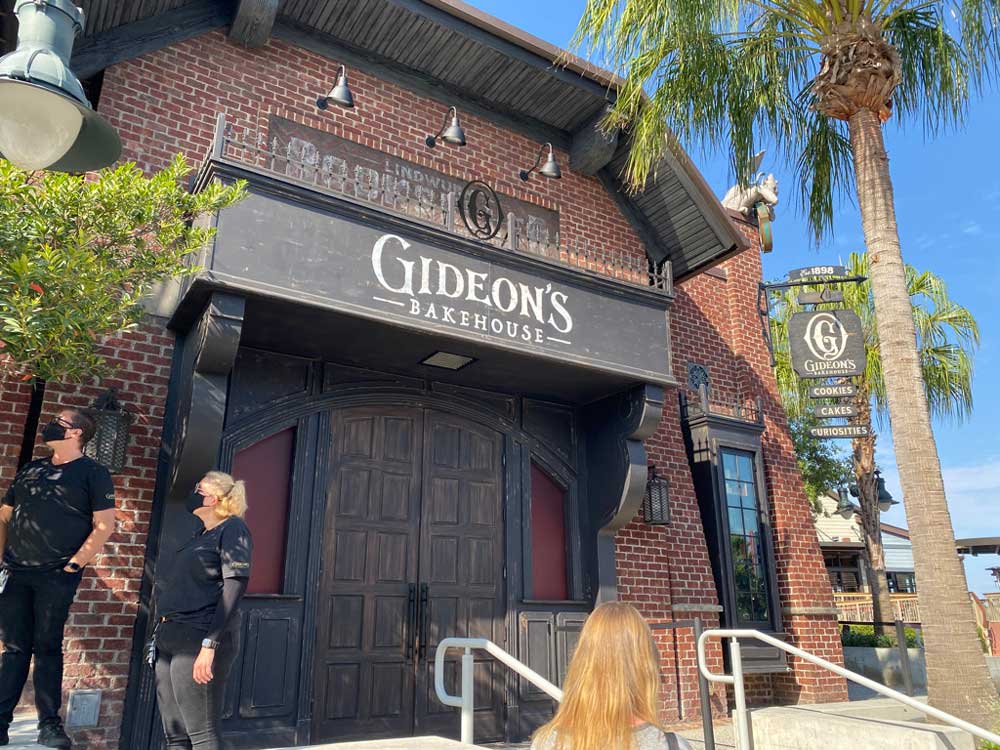 Do you ever hear about a new Disney snack then cannot stop thinking about it? You know it’s something you must have the next time you visit Walt Disney World, and you want to book a trip so that you can savor that snack as soon as possible.

That snack for me was a Gideon’s Bakehouse Coffee Cake Cookie. Oh, and their Peanut Butter Cold Brew! Yes, there are two. Ahem. The cookie is described by Gideon’s as follows:

I think that’s worth a quick weekend trip to The Most Magical Place on Earth.

You may have heard of this amazing place that opened at Disney Springs late in December of 2020. They have the most awesome backstory I think I’ve ever heard, too; if you haven’t seen it, head to the official Gideon’s website and give it a read. It all began with one man and a chocolate chip cookie recipe that he tweaked thousands of times over a span of 15 years until he finally perfected it. And, let me tell you, perfect is exactly what it is.

You also may have heard that getting your hands on one of these amazing cookies involves an investment in your time. It can sometimes involve a 3- to 4-hour wait to get into the shop. A virtual queue is offered once the line reaches a certain point, but the idea of spending half the day at Disney Springs, if that’s not your cup of tea (or coffee, in my case), can be a bit too much.

A few weeks ago, when my husband and I visited Walt Disney World for the weekend to celebrate our anniversary, I had the chance to get my hands on some of the best treats I’ve ever had the pleasure of enjoying. All I have heard about for the past year is how incredible Gideon‘s cookies are. And not just certain ones but ALL of them. I’m here to tell you that all the hype is well justified, my friends.

The cookie that intrigued me the most was the Coffee Cake Cookie. I had heard that they served this at their East End Market location but only for one month out of the entire year, and if you didn’t make it during that particular month, you were out of luck. When Gideon’s announced the opening of their flagship Disney Springs location, the one thing that had me super excited was that this particular cookie would be available every morning.

Now, for our plan of attack. We knew we had to visit in the morning because we heard that Gideon’s only baked 250 of the beloved Coffee Cake Cookie each day, and once that daily supply was gone, that was it.

The Disney Springs parking garages open at 9 a.m. each morning. Since we drove down and had our own transportation, we left our resort at 8:30 a.m. and arrived at the Orange Garage just before nine so that we could be one of the first vehicles to park and skedaddle on over to Gideon’s. By the time we reached the line at Gideon’s, there were maybe six parties ahead of us. We were close enough to the entrance that we could sit down on the concrete benches that line the side of the building, which was perfect.

I wasn’t sure exactly how everything worked with the virtual queue when we arrived. I knew they cut the line off at a certain point, but I wasn’t sure of all the details. The line wraps around the corner and eventually goes past Morimoto Asia – this doesn’t take long. Once it gets to what the cast members told us was a 90-minute wait, they start the virtual queue. It’s important to know that you have to join the virtual queue in person; there is no other way to join.

The bakery was set to open that morning at 10 a.m. We figured we’d have to wait for maybe an hour; however, we were pleasantly surprised when they started welcoming guests inside at about 9:50. They continued to invite people in one group at a time until they reached their capacity. As one party exited the shop, another party was invited in.

Waiting in the line gave us plenty of time to check out all the detail in the shop’s windows. The décor is just incredible with its gothic vibe. It looks so mysterious, and you have no earthly idea that the baked goods behind those giant doors will be some of the very best you’ve ever had. The mystique of the entire ultra-themed environment, once you get inside, is like something I’ve never experienced before. The shop is very dark, but you can easily see all of the décor on the walls and the bakery items displayed in gorgeous glass cases.


While you’re in line, Gideon’s cast members pass out little menu cards to each party. On one side of the card, you’ll find the list of items that are available during the month of your visit. On the other side, there was an illustration of Stuart Valencia – the Florida “Orange Boy” – who was introduced for April along with a new cookie of the month. You can read Deni’s review of the Orange Pecan Chocolate Chip Cookie here. Gideon’s has introduced a new character for May in celebration of ‘Halfway to Halloween.’ His name is Barnabas Mephistophelittle – say that five times fast!

You don’t have a ton of time to look around the shop once you’re inside. The part guests see is a very, very small space. I, for one, would LOVE it if they ever offered behind-the-scenes tours – sign me up!

Once you get inside, you’ll have just long enough to grab a few pics before reaching a cashier – maybe five minutes at the most. It’s good to have a general idea of what you’d like to purchase before you step inside but keep in mind that once you see the treats that are not listed on your card, you might be leaving with more treats than you’d originally planned on. Ahem.

From the time the doors were opened allowing us entrance into the store and the time we walked out with our bag of goodies was maybe 12 minutes at the most. All in all, we spent just a little under 1.5 hours in total, and let me tell you, enjoying the treats was worth every second of that wait. Peanut Butter Cold Brew paired with a Coffee Cake Cookie is the breakfast of champions. When at Disney, right? Shhh… don’t tell my mom.

Speaking of having to go in-person, this is the only way to get your hands on the goodness that is Gideon’s Bakehouse. We’re told that their delicious treats are prepared in a way that does not encourage shipping, so you’ll want to grab an extra two or three cookies to bring home with you. I’ll be the first to let you know that they freeze beautifully! We left them wrapped in their Gideon’s paper, then sealed them in a Ziploc bag and tossed them into the freezer. When we were ready to enjoy one, we let it thaw out on the counter for a few hours and cut it in half – neither my husband nor I wanted to share, but alas, it was the last one, and we’re a 2.5-hour drive from Gideon’s which might very well be a blessing!

If a trip to Gideon’s is on your must-do list for your next Walt Disney World vacation, I hope my experience helps you. Let me know in the comments if you have questions, and I’ll do my best to answer them for you!