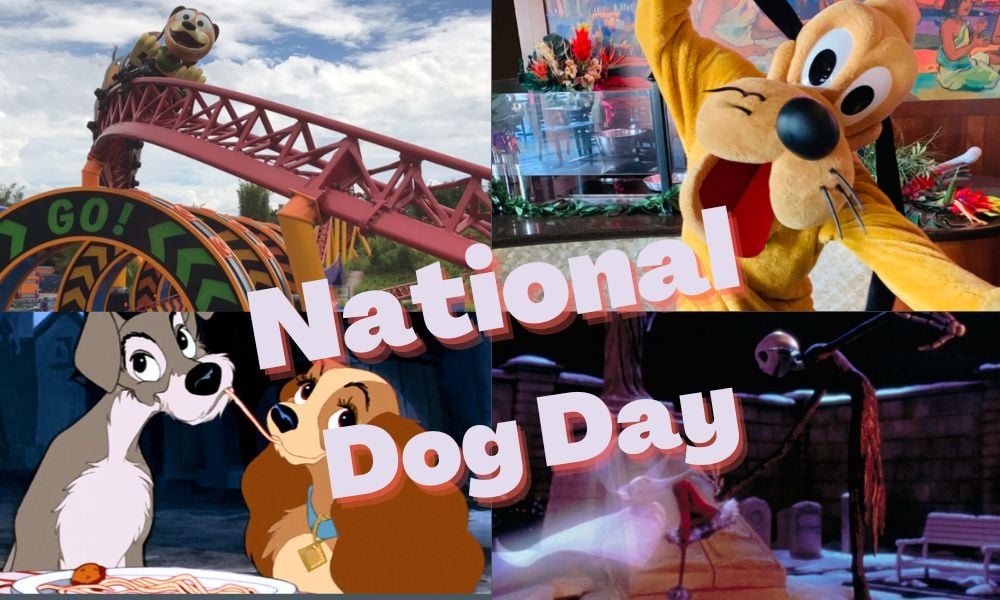 In case you didn’t know, August 26th is National Dog, and I thought the best way to celebrate would be to highlight the best Disney dogs. Let’s dive into this list.

Pluto is Mickey’s loyal pal, making him the most famous Disney dog. The D23 website explains Pluto’s history and how he became Mickey’s dog/best friend. The story goes that on one of Pluto’s first on-screen appearances, he was referred to as Rover, and he was Minnie’s pet. It wasn’t until the third cartoon, where he received the name Pluto that his friendship with Mickey started. Now he is one of our favorite dogs of all time.

This list wouldn’t be complete if we didn’t mention Slinky Dog from Toy Story. He even has his own coaster at Hollywood Studios, Slinky Dog Dash. He is an iconic Toy Story character that many of us grew up with.

Dug from the movie UP! has found a way into all of our hearts. He is such a loyal pup that is full of innocence. He repeatedly says, “You are my master, and I LOVE you!” throughout the movie, and I bet we all wish we could hear our pets say that to us. Before the pandemic, you could meet Dug over in Animal Kingdom.

While we are on the topic of classy and helpful pups, we can’t forget Nana from Peter Pan. She was such a fantastic nurse to the Darling children. Even though she was often reminded that she was a dog and not a real nurse, she still did her best to care for the children.

As we enter the Halloween season here in Orlando, we can’t forget this frightfully cute pup from The Nightmare Before Christmas. Zero may be a ghost, but he is still a great dog. He is the one that led Jack to Christmas Town and then, later in the movie, used his red nose to lead the skeleton reindeer through the foggy skies on Christmas Eve.

I could keep making this list for hours, but then it would be the longest list to exist, so I wanted to briefly mention a few other pups that deserve to have a moment in the spotlight. Percy from Pocahontas is a standout pup that creates a lot of comedic moments throughout the film. Copper from Fox and the Hound, that movie is a tear-jerker and just has so many emotions. Dante from Coco has become a fan favorite; he even has his own 50th statue in the parks. Last but not least, we can’t forget about Max from The Little Mermaid. He is so big and fluffy; all I want is to hug him. He had some great moments throughout the film, especially when Ariel makes her way to land.

Which Disney dog is your favorite? Let us know in the comments!