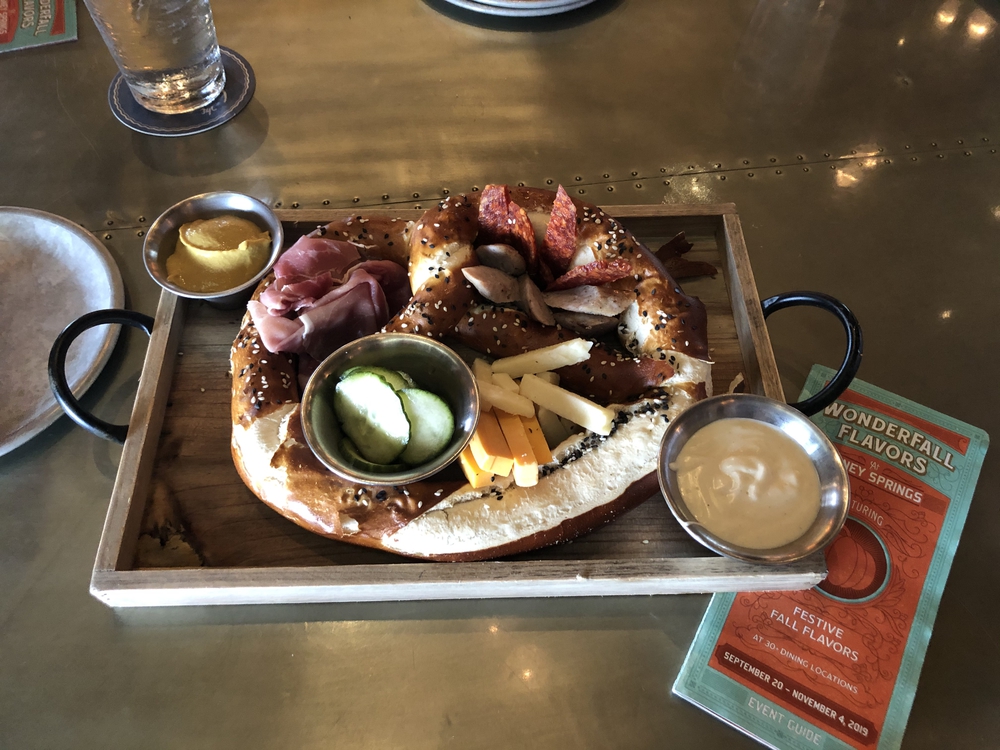 There’s a seasonal menu available at Disney Springs just for the fall season, and, if you’ll be visiting Walt Disney World soon, it’s something that you just might want to check out. The special menu is called WonderFall Flavors, and Steve Porter, Corey Fiasconaro, and I stopped by Disney Springs this week to check out some of the offerings.

A word of warning: the list of the WonderFall Flavors menu items is quite extensive, and includes many of the table service and counter service options located throughout Disney Springs. Plan accordingly. At each table service restaurant, you’ll find that there’s a special entrée and a special beverage or cocktail that’s been chosen specifically to be featured on the WonderFall Flavors menu.

Steve, Fiasco, and I decided to tackle things like we would if we were eating a meal at one restaurant: an appetizer, an entrée, a dessert (or two), and a beverage. 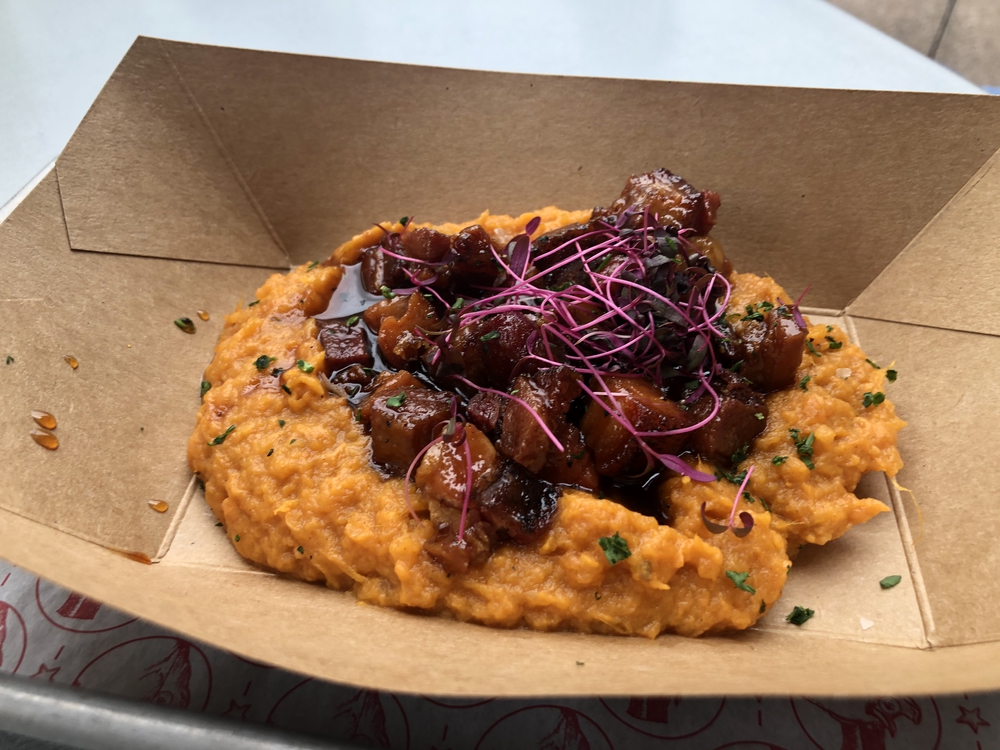 Our fall flavored culinary adventure began at The Polite Pig in Town Center. We started with an entrée item, and it turned out to be a great place to begin. We had the Maple Bourbon Pork Belly, which consisted of pork belly croutons and smashed sweet potatoes with maple whiskey caramel. The dish costs $12, and The Polite Pig offers discounts for both cast members and annual passholders.

This dish was delicious. The pork belly was caramelized just like you would want it to be. It was sweet, and crunchy, and incredibly flavorful. The smashed sweet potatoes were rich and creamy, and paired nicely with the maple whiskey caramel sauce. While this dish is delicious, it is also fairly small, and, in my mind, not enough value for the price. Because the portion is somewhat small, I don’t think I would purchase this again. There’s not a lot of pork belly in the dish, but, to be fair, what was there really did taste great. 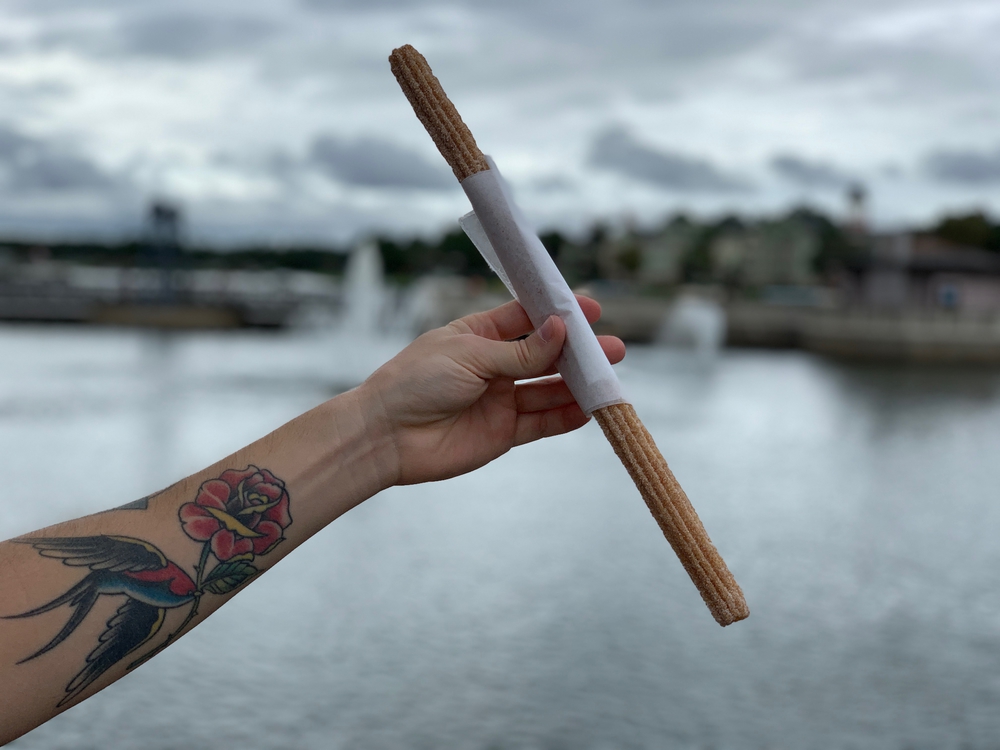 Our next stop was at Sunshine Churros (yes, we decided to skip straight to dessert) for their Pumpkin Spice Churro. If you remember just a few weeks back, Steve and I stopped by Sunshine Churros and enjoyed several of their churros. Some were run-of-the-mill varieties, and others were stand outs. Unfortunately, the Pumpkin Spice Churro from the WonderFall Flavors menu was of the run-of-the-mill variety.

First, it did not look anything like the photo in the WonderFall Flavors brochure. It was not filled with cream, but came with a side of of cheesecake icing. Second, the description said that it is “holiday inspired with delicious pumpkin spice.” The pumpkin spice flavoring was very difficult to detect. It was a good churro; just not necessarily one fitting the bill as something that is pumpkin spice flavored. The Pumpkin Spice Churro is the most expensive churro currently on the menu at Sunshine Churros, and costs $6.75.

We next made our way to Wolfgang Puck Express in The Marketplace. Our intent was to have their Delicious Cornflake French Toast made with maple syrup, seasonal fruit topping, and cinnamon sugar. Unfortunately, the french toast is only served during breakfast hours (9-11am). This was not noted in the brochure, but it’s good to know going into it. 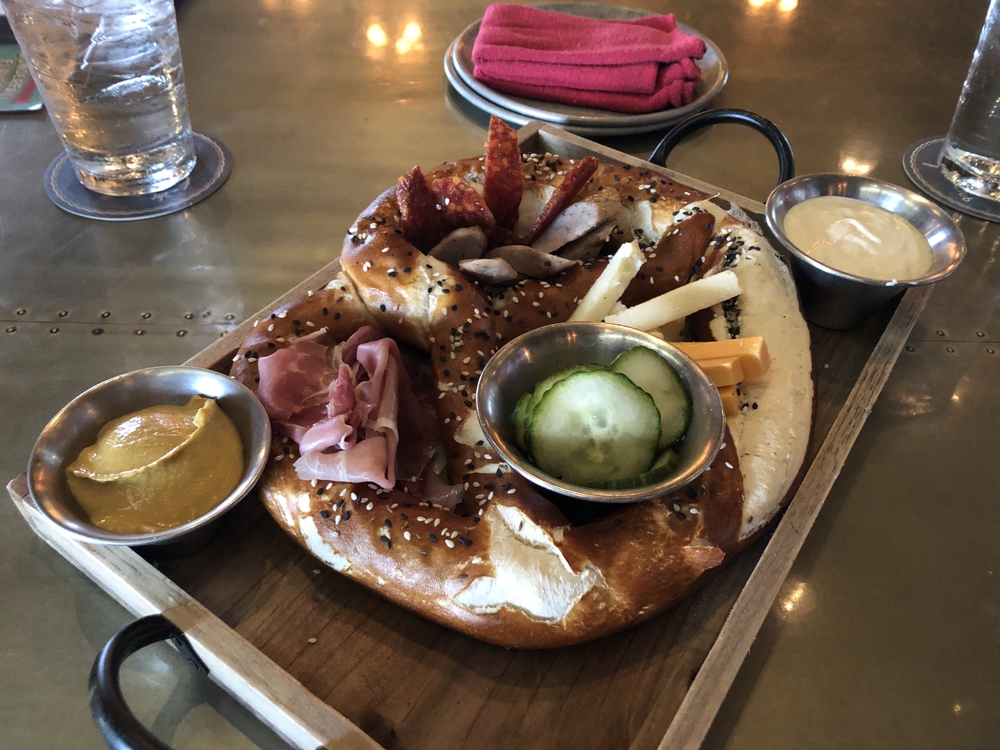 Next, we next headed over to Jock Lindsey‘s Hangar Bar in The Landing for the Giant Charcuterie Pretzel. This dish features their air pirate cargo pretzel, prosciutto, sliced brats, artisan pepperoni, smoked cheddar, black diamond cheddar, pickles, spicy mustard, and beer cheese fondue. This massive appetizer cost $22, and, in my opinion, it is worth every penny. This was the stand out for both Steve and I during our WonderFall Flavors journey. The pretzel is huge. There’s really no other word for it. Well, there’s ginormous, gigantic, but I digress; you get the picture. And it’s delicious. It’s fluffy on the inside and crunchy on the outside and is studded with both sesame and pumpernickel seeds rather than salt.

The pairings of the meats and cheeses were simply perfect, and the pickles were a nice touch. Our favorite among all the things on the pretzel board was the beer cheese fondue. How can you go wrong with beer cheese fondue? It was creamy and rich and not overly salty or hoppy. The Giant Charcuterie Pretzel is the perfect snack to share with others. 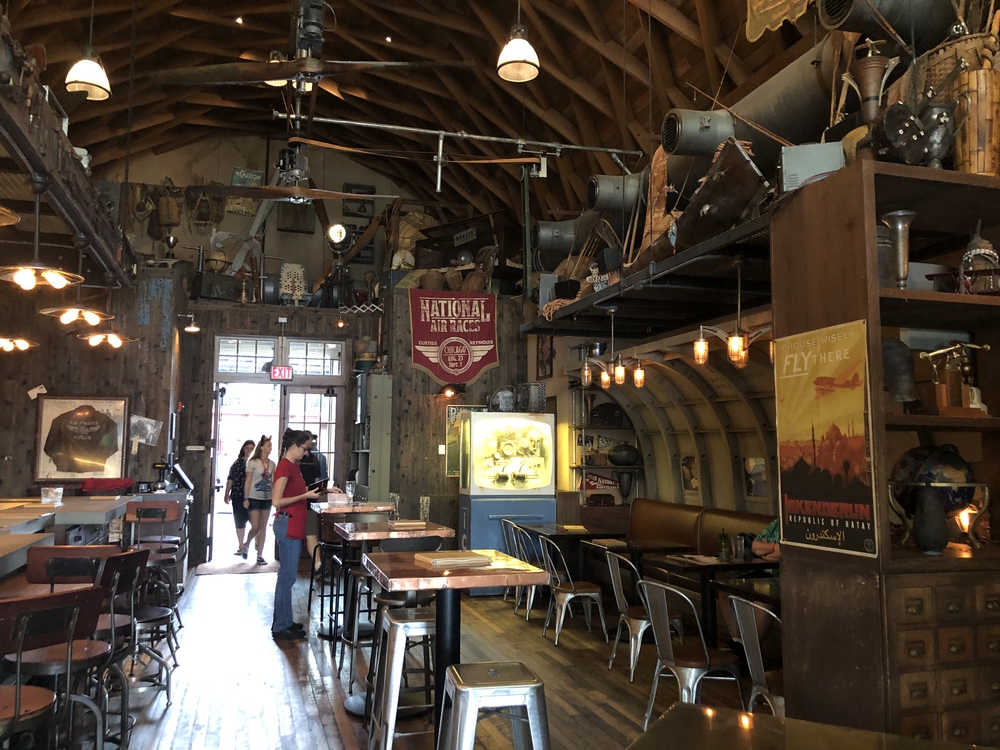 The environment inside Jock Lindsey’s Hangar Bar is incredibly entertaining and unique. The cast members staffing the location are so proud of the bar, and, for Indiana Jones fans, there are detailed touches and hidden references all around. Jock Lindsey‘s Hangar Bar doesn’t offer an annual passsholder discount, but does accept Tables in Wonderland. 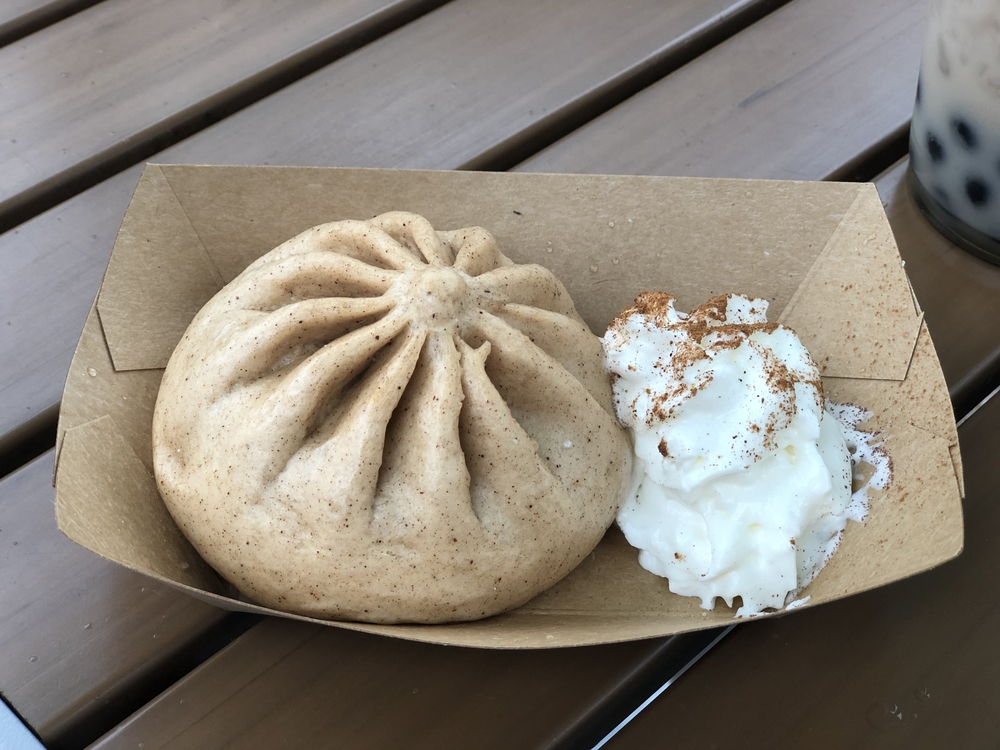 We ended our meal in West Side at YeSake, where we tried two of the three WonderFall Flavors menu items: the Kabocha Pumpkin Bun ($5.75) and the Pumpkin Spice Boba Tea ($8). These items were Fiasco’s favorites of the afternoon. The Pumpkin Bun is a cinnamon steamed bun filled with sweet pumpkin cream and cranberries. Basically, it was a yummy and warm mini pumpkin pie with a few cranberries thrown in for good measure. The dough was incredibly soft and tasted of cinnamon and nutmeg. The bun was creamy and delicious, and, even as someone who doesn’t like pumpkin pie, I found it to be quite enjoyable. 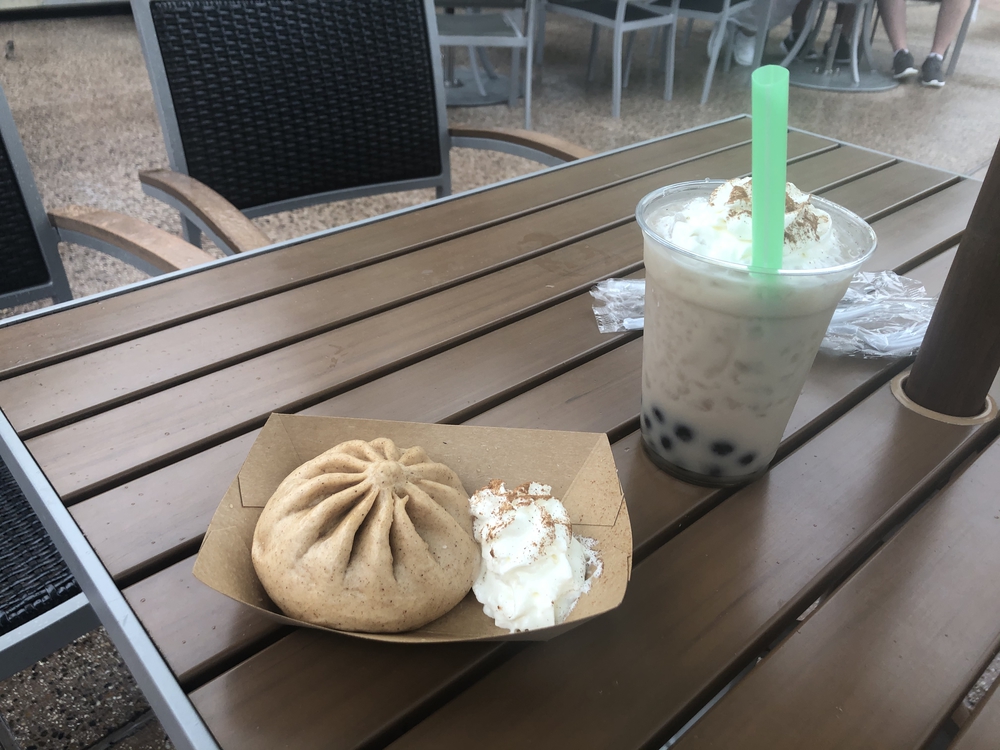 The Pumpkin Spice Boba Tea is made with tea, almond milk, boba pearls, and spices. I likened it to an iced chai tea latte, but without some of the bitterness that a chai tea latte can have. It was smooth, sweet, creamy, and quite enjoyable. I could see how this would be a very refreshing drink to have on a warm afternoon at Disney Springs. The warmer flavors of the spices and tea pair nicely with the almond milk.

All in all, we really enjoyed the chance to stop by and taste items that were new additions at the Disney Springs eating establishments. The WonderFall Flavors menu items will be available through November 4th, and a special event guide can be picked up at any map and brochure location throughout Disney Springs.