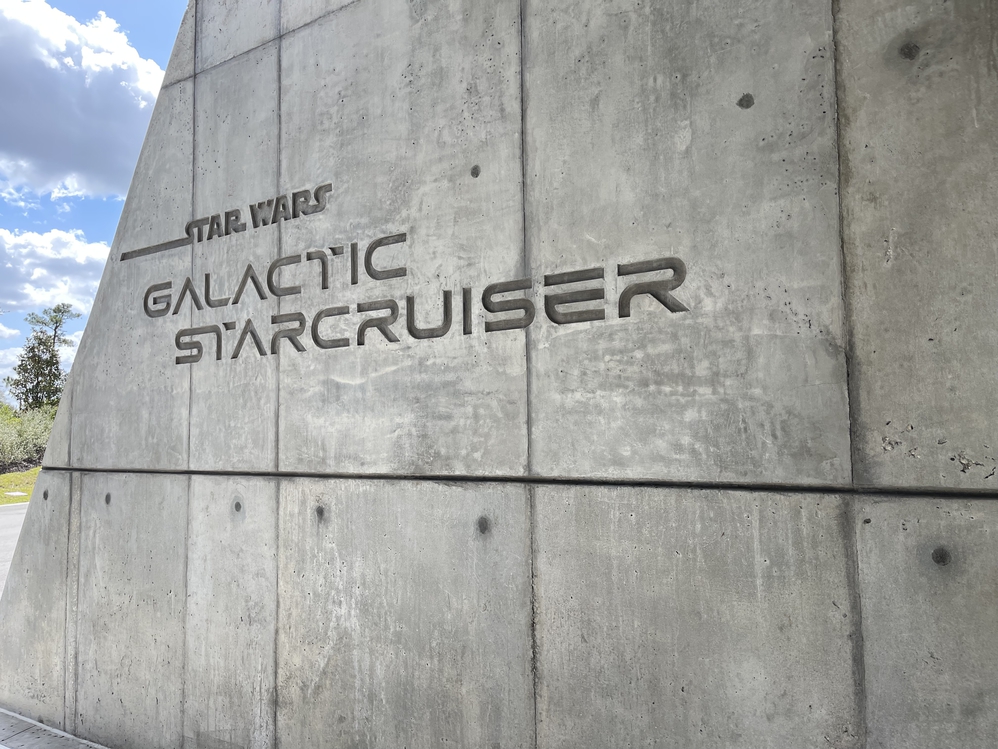 It’s not every day that Walt Disney World fans get to step into a brand-new Disney experience. Thankfully, I, along with Craig and Kylie Williams, on behalf of The DIS, had the chance to attend the Media Voyage of the Star Wars: Galactic Starcruiser this week. If you’re planning a trip aboard the Halcyon and you’re wondering what this new Disney experience looks like, I thought that we might take a look around.

First things first: as per DIS policy, I won’t be reviewing the environment or the experience had during the Media Voyage. We do not review that for which we have not paid. Many thanks to Disney for inviting us onboard the Halcyon.

Secondly, I wanted to say again that we’re about to take a pictorial tour of the Starcruiser. If you don’t want to have the interior of the ship and/or who might be onboard spoiled, this article’s might not be for you.

Now that we’ve laid the groundwork, let’s take a tour of the ship!

Your adventure begins at the Chandrila Star Line terminal. If you drove, as soon as you pull up out front, a member of the valet team will take down your vehicle’s information as members of the Passenger Services team gather up your luggage for the voyage. It’s important to note that all cars are valet parked during each stay. Gratuities for the valet team are not included in the overall cost of your stay on the Starcruiser, so you might want to throw tip money in your carry-on luggage for the end of the voyage.

As happens aboard Disney Cruise Line, your luggage will be checked with Passenger Services and will appear in your cabin later in the afternoon. Guests are asked to keep medication and important paperwork with them.

Each guest will be given a special Star Wars: Galactic Starcruiser MagicBand and will be instructed to wear the MagicBand at all times during their voyage. It’s an important part of the experience aboard the Halcyon, as well as during the stop at Batuu.

After passing through security, guests proceed down the hall toward an illuminated Chandrila Star Line logo. Guests are then shown a safety video and escorted to the transport pod.

Once aboard the transport pod, guests can watch their ascent to the Halcyon through viewports near the ceiling.

The transport pods are “loaded onto” the Halcyon, and guests then enter the ship’s Atrium on Deck 6.

As you would expect, the Atrium is quite large. There’s ample seating clad in a rich burgundy velveteen found throughout the space, as well as a model of the ship, and two-story tall video screens. If you’re needing to charge up a device (which you likely will at some point during your voyage because checking your Datapad is vital for keeping up to speed on the storylines that are unfolding), you’ll find outlets and USB ports built into the banquette seating.

Major story moments occur in the ship’s Atrium. Guests will find themselves in the middle of a living story throughout the cruise in this large space, and characters move through and meet with guests in the Atrium quite often. It’s the hub of every voyage.

The Bridge is found to the left as guests step off of the transport pod and into the Atrium. Each guest will spend time during their voyage in the Bridge as they learn how to operate the different consoles.

Those wishing to enjoy an afternoon or evening snack will want to stop by the Concierge desk found along one side of the atrium. This is a one-stop shop of sorts; if you have any questions or special request, you’ll want to visit this spot and speak to a Passenger Services crew member.

It’s also good to know that while there is not a FuelRod kiosk on board, Passenger Services crew members have a supply of FuelRods charged and ready for guests. They’re able to swap out the portable chargers for you at the Concierge desk, and they’ll even have a supply of them on Batuu if you need to swap one during your visit.

If you’re looking for a drink, you’ll find the Sublight Lounge across the Atrium from the Concierge desk.

Guests will find an electronic Sabacc table in the center of the space, and those wanting to learn how to play Sabacc with traditional cards outside of the formal lesson scheduled on their itinerary can request a deck and a quick lesson from one of the Sublight Lounge crew members.

If you’re wanting to do a little shopping, The Chandrila Collection is located in the back right corner of the Atrium. You’ll find everything from costume elements to high-end jewelry to trading pins for sale, including a lightsaber hilt that can be personalized.

The items available for purchase in The Chandrila Collection are exclusive to the ship and will be found nowhere else on Walt Disney World property. If you see it and like it, my suggestion is that you buy it. Disney Vacation Club and Annual Passholder discounts can be used on purchases (except for the lightsaber) in the shop.

The cabin that we were given for the Media Voyage was a standard cabin, and featured a queen-sized bed, two bunks built into the bedroom wall, a well-appointed bathroom, a vanity, and ample storage for luggage.

An adult can fit in the bunk beds, and each bunk has its own light that pops out from the wall.

It’s worth noting for passengers who need access to a bathtub that there are no bathtubs onboard the Starcruiser. While the shower stall was spacious, I know that this information is important for those traveling with children or those who simply favor a bath over a shower.

Each cabin features a viewport that provides you with a glimpse into what’s happening outside. Guests can either have the viewport on or turn it off. Craig discovered that it cannot be left on without the colored lights surrounding the window frame also being on. If those colored lights are a bit too bright for you at night, you’ll need to turn off the screen entirely.

At this time, each cabin is equipped with a communications panel that allows you to connect with D3-09, the ship’s logistics droid. Simply speak, and D3-09 will respond with helpful tips and suggestions, and perhaps a bedtime story or two. We’ve heard that the D3-09 functionality might be changing for future voyages; we’ll keep you updated if it does.

Down on Deck 4, guests will find the Engineering Room, the Cargo Hold, and the Brig, all of which may play a part in your voyage.

Also on Deck 4, you’ll find the Crown of Corellia dining room, which hosts a buffet for breakfast and lunch, as well as two themed dinners. The foundation colors of the area remain somewhat neutral while the chandeliers feature pops of bright colors.

The Captain’s Table is found in the center of the large room, and a stage sits at one end. The dining room is also used for a Sabacc Tournament on Day 2 of the voyage.

The Lightsaber Training Pod is found on Deck 4 as well. Each guest will have the opportunity while on board to take part in a training session, and the markings on the floor are to instruct passengers on where to stand while in the room.

The Transport Dock to and from Batuu is located at the end of the hall on Deck 4. Guests should keep in mind that the wait for the next transport could take 15 to 20 minutes. The ride to Batuu in the windowless transport takes about 8 minutes and can be bumpy.

Guests wanting a bit of fresh air can spend time in the Climate Simulator, also found on Deck 4. Hydroponic plants cover the walls of the open air simulator, and quiet music plays.

The Starcruiser’s storyline is that the Halcyon is celebrating its 275th anniversary and has just undergone an extensive renovation. The areas are clean and bright and richly appointed, as you might expect a luxury liner to be.

One last note: if you’re planning a stay aboard the Halcyon, I highly recommend looking over the deck plans before your voyage. Being familiar with the ship will help you as you begin your story onboard.

Have questions about the Starcruiser? Drop them in the comments section below!

If you’d like a spoiler-free overview of our Starcruiser experience, check out the video below:

If you’d like to watch our experience onboard the Media Voyage (spoilers and all), check out the video below:

As always, the expert travel agents Dreams Unlimited Travel are here to help you plan your next Disney vacation, including voyages aboard the Galactic Starcruiser. Reach out to them to request your free, no-obligation quote.