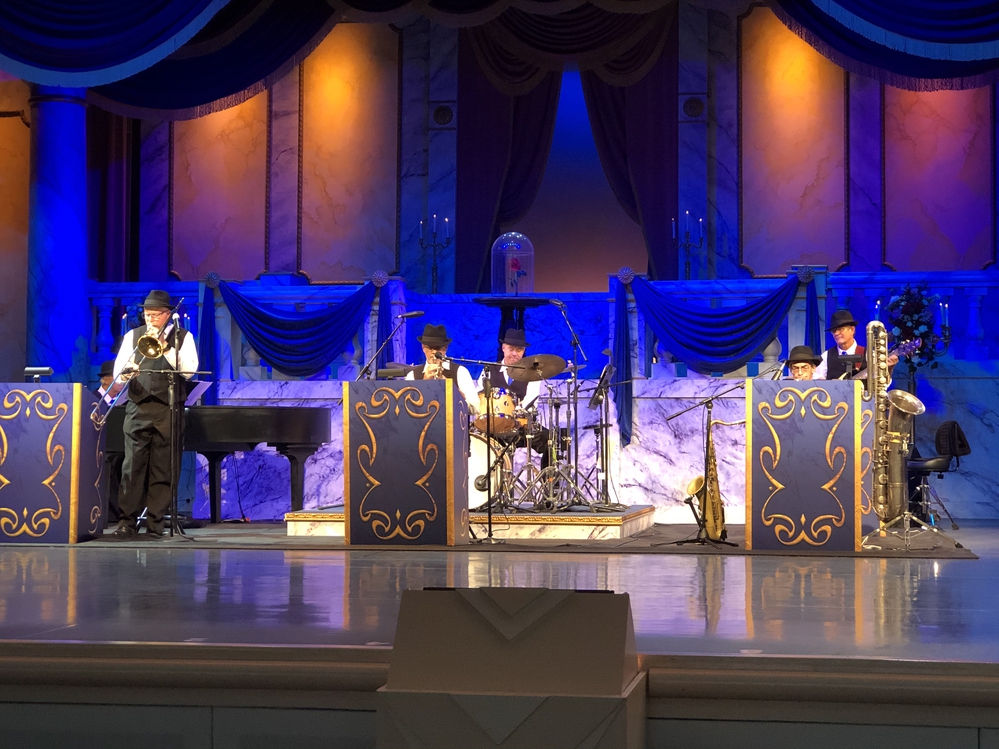 Since the beginning of August, the Theater of the Stars in Disney’s Hollywood Studios has been home to a new entertainment offering: The Disney Society Orchestra and Friends.

With the ongoing talks between Disney and Actors’ Equity, the Beauty and the Beast – Live on Stage show is currently sidelined. In its place, a six-piece orchestra is performing songs inspired by Disney’s Hollywood Studios.

Each performance runs approximately 15 minutes in length, and is featured 9 times each day.

The Beauty and the Beast – Live on Stage banners are still hanging at the back of the theater.

The theater has been outfitted with all of the necessary physical distancing markers should a queue begin to form while guests are being seated. Hand sanitizer is available at the back of the theater.

As part of the current safety measures, every other row is being utilized for the performances.

The orchestra is incredibly talented, and the show is a great way to stop and take a few minutes to savor great music in a covered location. It was very clear that the musicians are enjoying getting to play this music for park guests, and it was fun getting to be there.

The song set is comprised of If I Didn’t Have You, Cantina Band, Under the Sea, The Muppets Theme, You’ve Got a Friend in Me, Be Our Guest, and Beauty and the Beast. It was an excellent blend of music (who doesn’t love hearing Cantina Band played live?), and I felt it paid perfect tribute to the characters who call Hollywood Studios home.

Filling the role of “…and Friends” were some of our favorites from the Beauty and the Beast – Live on Stage show. Toward the end of the performance, Chip, Cogsworth, Lumiere, and Mrs. Potts took the stage to dance along with the music.

Of course, the show wouldn’t be complete without the theater’s hosts gracing the stage. At the very end, Belle and Beast stood at the back of the stage, and helped to close out the performance.

The Disney Society Orchestra and Friends is enjoyable for guests of all ages, and, if you’ll be in Hollywood Studios in the near future, I highly recommend stopping by.