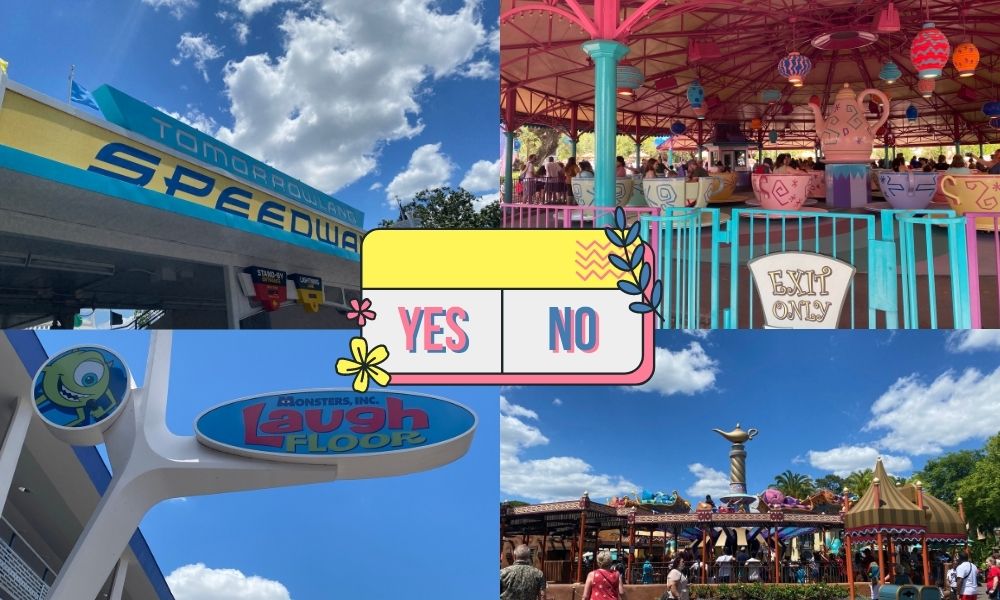 On our Twitter, The Dis (@TheDis), a poll called “Which Magic Kingdom attraction would you get rid of?” was posted, and we got answers. The options to pick from was Tomorrowland Speedway, Mad Tea Party, The Magic Carpets of Aladdin, and Monsters Inc. Laugh Floor. One of these options got more attention than the others, which wasn’t surprising. Over two thousand of you guys voted in this poll, and I want to thank you for participating.

Let’s break down the poll percentages 41% of the voters picked Tomorrowland Speedway, 7% voted for Mad Tea Party, 28% voted for The Magic Carpets of Aladdin, and 24% for Monsters Inc. Laugh Floor. The majority of people want Tomorrowland Speedway to get removed or updated. I agree with this outcome because I wish they would do something different with this attraction, like making it more futuristic by making the cars electric. The smell this attraction pours into the land has made me nauseous since I was a kid, so I’ve barely been on this ride. From the comments on the poll, I can see I am not alone in hating the smell this attraction gives off.

The Magic Carpets of Aladdin fell into second place in this poll. I like the concept, but I think it creates such a horrible bottleneck in Adventureland and makes it hard for traffic to flow nicely. It’s a great attraction for the younger kids, and I mean, the spitting camel is pretty cool. From the comments on the poll, it seems that most people agree that the placement of the attraction is not great and causes significant traffic.

In third place, we have Monsters Inc. Laugh Floor. This is not my favorite attraction, but it’s great for taking a break from the Florida heat. In the comments, it’s easy to see that many people are hardcore fans of this attraction and would never want to see it leave Tomorrowland. Some people, a small handful, said that this attraction needs to be moved to Hollywood Studios or bulldozed.

Last but not least, the Mad Tea Party. This seems like an attraction that no one wants to lose except a small 7%. This attraction is cute and fun for families, kids, and thrill-seekers. My stomach can’t handle all the spinning, but the concept is adorable. I have many memories as a kid with my dad spinning the teacups like crazy and having a blast. Now I love to watch other people ride this attraction and listen to the fun music played on the ride.

All in all, these rides each serve their own purpose and cater to different people. I think each attraction has something different to offer, and there can be positives found in each one. Like Monsters Inc. Laugh Floor, the positive is the air conditioning; the positive for Tomorrowland Speedway is the views of TRON Lightcycle.

Which Magic Kingdom attraction would you get rid of? Let us know in the comments.