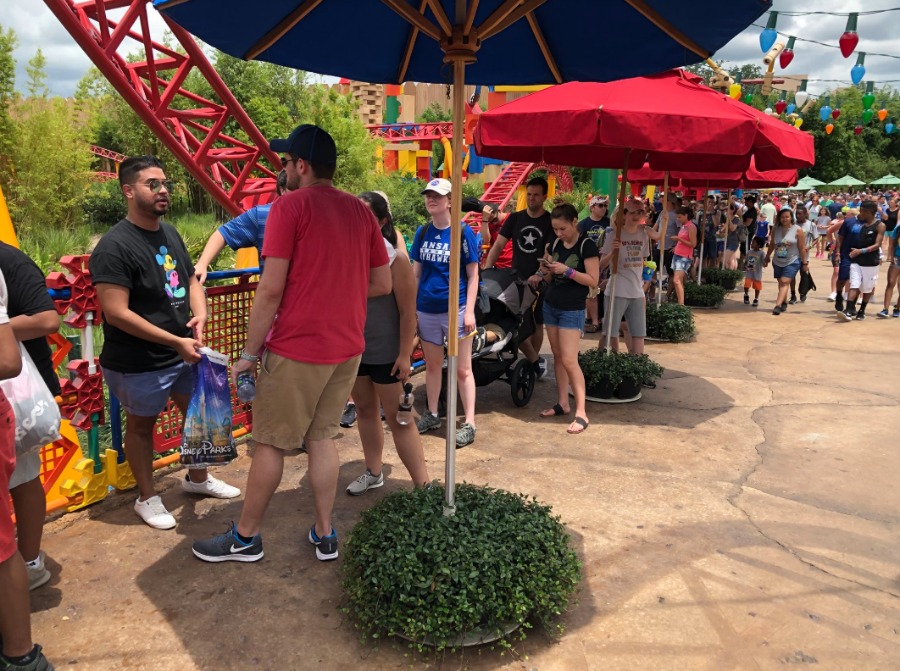 The much-anticipated Toy Story Land opened to all guests this past weekend and it was a big hit with most who visited according to posts on popular social media outlets such as Twitter and Instagram. Being among those who stalked all of the action online from my living room, I noticed a common complaint right from the get-go which was the lack of an indoor, air-conditioned shop and/or an indoor restaurant with seating. Many folks also had complaints about the lack of shaded areas inside the new land. Of course with it being the middle of summer in Central Florida, it was as hot as fire outside and people were miserably hot.

If you watched any of the videos or looked at the photos posted of Toy Story Land, you can tell right away that it’s not gigantic. It’s definitely a great size for Andy’s backyard, though, and I personally feel that it’s just the right size, but that’s just me. At one point on opening day, the line was upwards of two and a half hours just to get inside the land itself.

We all know that the popularity of new attractions and lands at any of the Disney theme parks draws in crowds of epic proportion on their opening days and even for years afterward sometimes, so the crowd level at Toy Story Land on opening day should not have come as a surprise to anyone.

What I was surprised to see were the posts where folks were criticizing Disney saying things like “they should’ve thought this out more”, “they rushed getting the land built”, “they were too cheap to put in shaded areas and more seating” - so on and so forth. Here’s how I look at it.

I think that the size and scope of how Toy Story Land was built was very intentional. You have to understand that crowd control is something that plays a HUGE part in everything at the theme parks. It's one of the biggest factors that comes to mind whenever I'm in one of the parks during a tremendously crowded time of the year and I'm always in awe of how Cast Members manage to get everyone where they need to be without getting trampled. It's no fun to be in a place with giant crowds that are not managed properly; in fact, it can be incredibly dangerous. I appreciate that Disney keeps these things in mind when designing their parks and I don't believe for one second that they are overlooking them.

For example, if there was an air-conditioned shop inside the land, it would be completely packed shoulder to shoulder with guests looking to get out of the sun as well as those browsing merchandise. Having the carts outside encourages folks to buy what they need and keep it moving. Toy Story Land merchandise will also be available in shops outside of the land including Beverly Sunset, In Character, and Mickey’s of Hollywood.

Many also complained that there wasn't much seating offered at Woody's Lunch Box, the new quick-service eatery inside Toy Story Land, and what was offered was all outdoors. One member of the DIS who was there opening day also mentioned that folks were not permitted to sit down at those few tables unless they had food in their hands. Now, there is already a huge indoor quick-service restaurant right around the corner at Disney's Hollywood Studios which is the ABC Commissary, so folks can easily head there if they're looking for some respite from the sun.

Don't get me wrong, I would have loved to see a Pizza Planet inside of Toy Story Land just like the rest of you, but maybe there is already a plan in the works for an expansion? Although, I kind of doubt it this soon, but Disney does manage to always leave room to create new experiences for their guests, so you never know.

While I don't have any inside knowledge of how decisions are made when it comes to these kinds of things, I do believe that the people who are in charge of making them are intelligent, hard-working people who genuinely want guests to enjoy their creations. How do you feel about it? Share your thoughts in the comments below or join the discussion over on our Facebook page!