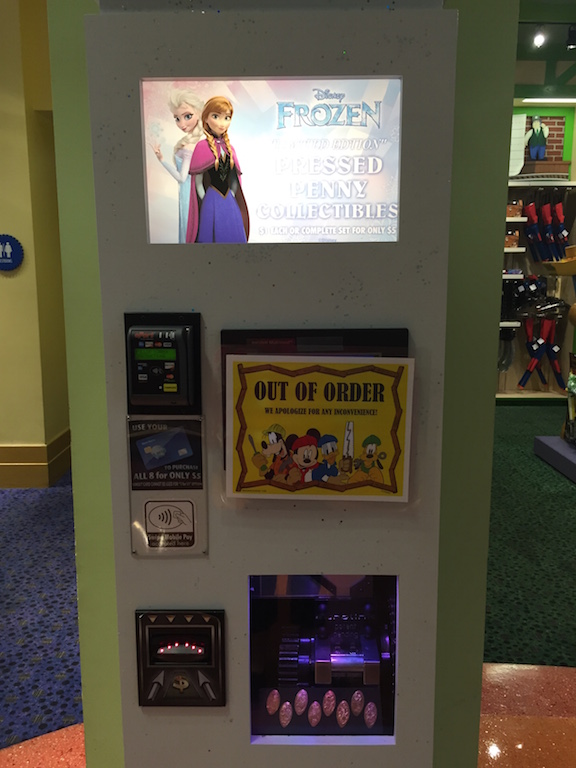 Our kids love to collect things, so this interest is often sparked when they see a new souvenir item at Walt Disney World. They’ve got collections of Sorcerers of the Magic Kingdom trading cards, transportation trading cards, Dumbo stuffed animals, trading pins, mini Tsum Tsums, and stuffed Mickeys. On this trip, they fell in love with the pressed penny machines. It started when our 7-year-old, Jonah, realized that his change from another purchase was 51 cents, just the amount he would need to make a pressed penny. Pressed penny machines can be found all across property – at all four theme parks, Downtown Disney, the resorts and the water parks. The cost for the pennies is 51 cents: 50 cents for the purchase and one penny to be pressed. You can actually even find a few pressed quarter machines (these cost $1, plus the quarter to press).  You can find a wide variety of designs, including characters, attractions, theme park logos and even special events.  We didn’t plan ahead for this, but one great tip that I’ve heard is to use a mini M&M container and to fill the container with layers of two quarters and a penny, that way you always know you’ll have the correct amount.

Each boy had their own souvenir money, so we told them that as long as they were spending their own money, they could make as many pennies as they would like. As a mom, I was just happy that the pennies are small and wouldn’t take up much room at home… At first, they were just getting pennies from every machine they saw, but they quickly decided that they wanted to be more purposeful in their choices. On the front of the machines, a website was listed that would give them a map of the parks and show where each machine was located. Anytime we were in line for the rides, they would open the map on our phones and pour over it, checking out all the photos and deciding which pennies they really wanted and which they could live without. They each had a different method to which pennies they would collect. Jacob, age 9, loves Mickey, Duffy and America, so he gravitated towards pennies that had to do with any of those themes. Jonah just looked through the site until he found pennies that he liked. They then made a list of where the machines were so we could make sure to hunt them down.

It was interesting to see the different kinds of machines. Our favorites were the ones where you had to turn a crank to create the design. More often though, we found machines that you just pressed a button to make the penny. The kids loved collecting these pennies. We bought them each a little book to display them in and they were both very specific about how they wanted everything organized. Jonah even made a page for each park so he would know where he got the pennies. I’m not sure if they’ll get so many the next time we travel to Disney World, but I can see them continuing their collection if they see something special that piques their interest. Have you ever made any pressed pennies or is this a souvenir that doesn’t hold any interest for you? Share your experiences below!