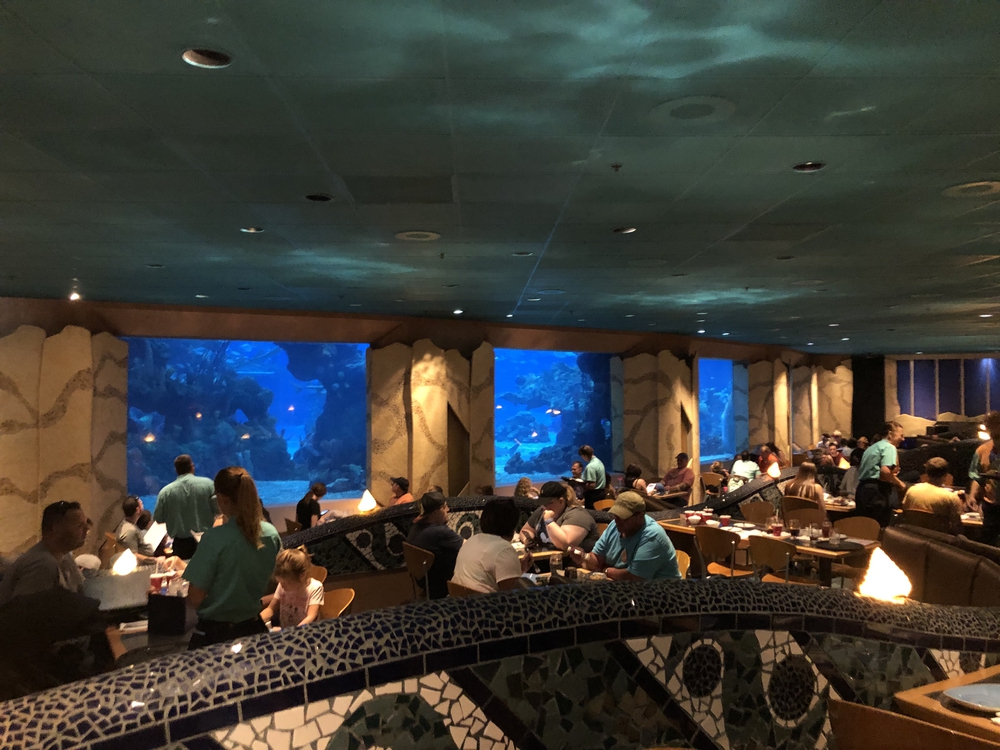 I think we all have those restaurants at Walt Disney World at which we’ve always wanted to dine, but just never have. Coral Reef Restaurant was one of those restaurants for me, and it turns out it was for Steve Porter and Corey Fiasconaro, too. Just last week we had a meal at Coral Reef and checked it off of our must-do list. 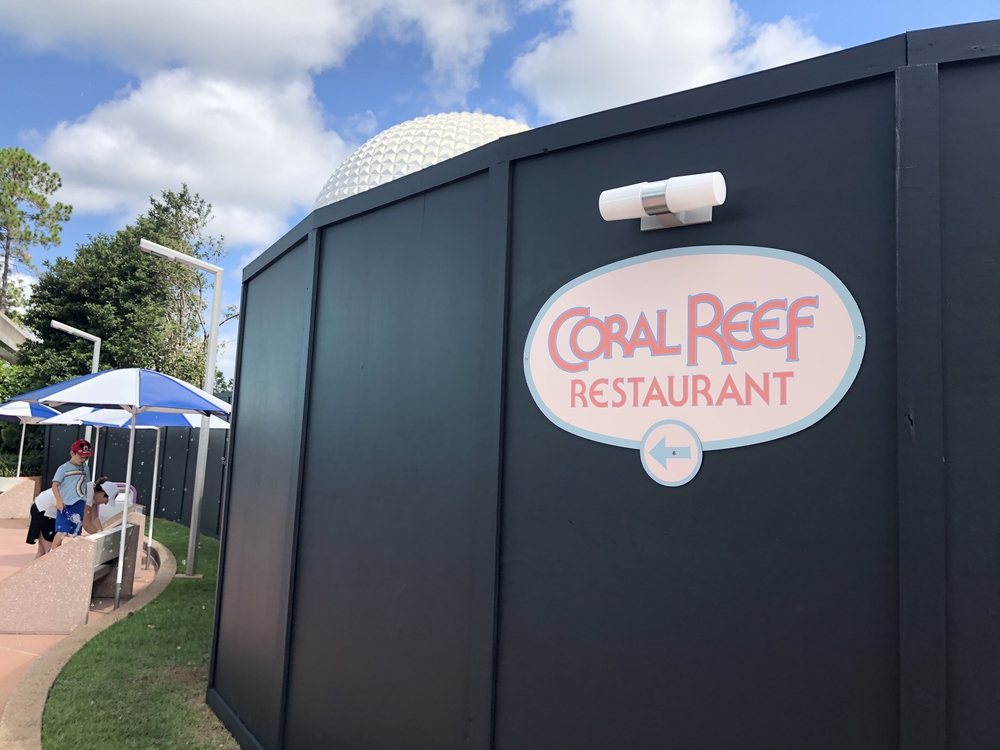 If you decide to dine at Coral Reef Restaurant in the near future, keep in mind that there’s construction happening just outside of the restaurant. You’ll see a few signs on construction walls pointing you in the right direction. If you’re heading to Coral Reef, walk toward The Seas with Nemo and Friends, and hang a right. 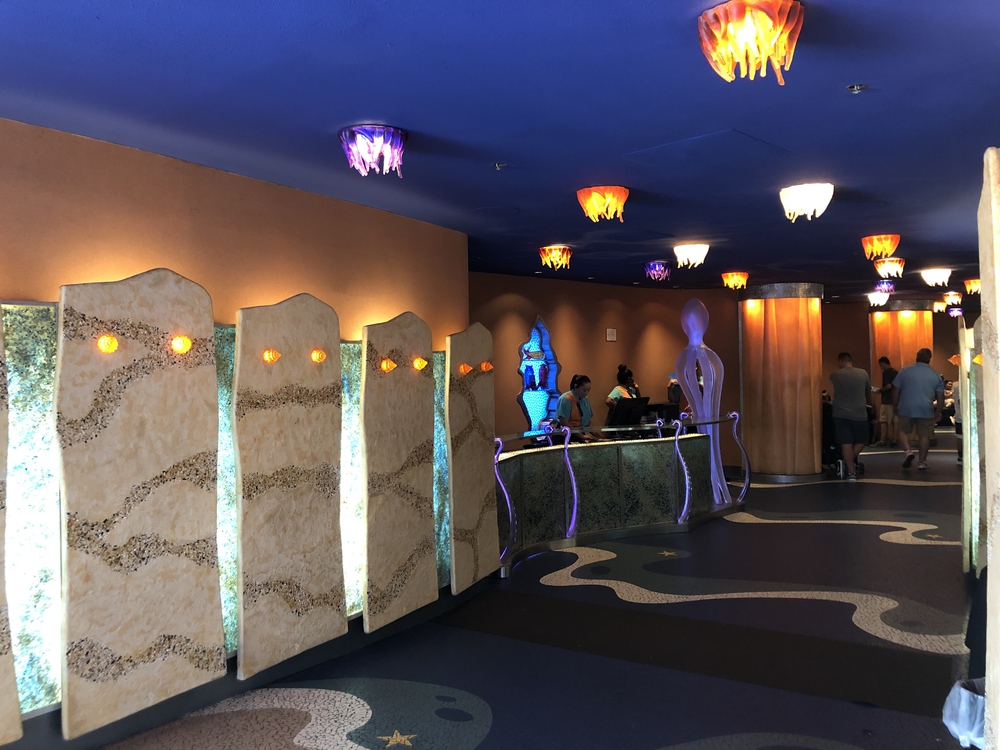 The entrance and lobby area are beautiful, and help to set the underwater theme right off the bat. The corbels on the the reception desk are shaped like octopus tentacles, and the lighting fixtures that hang from the ceiling look like coral formations. Steve made the comment during our review of the restaurant that it reminded him of something you would see on a cruise ship, and I shared that I thought of Disney Cruise Line as soon as I walked in the door. This space is definitely reminiscent of a Disney cruise ship. 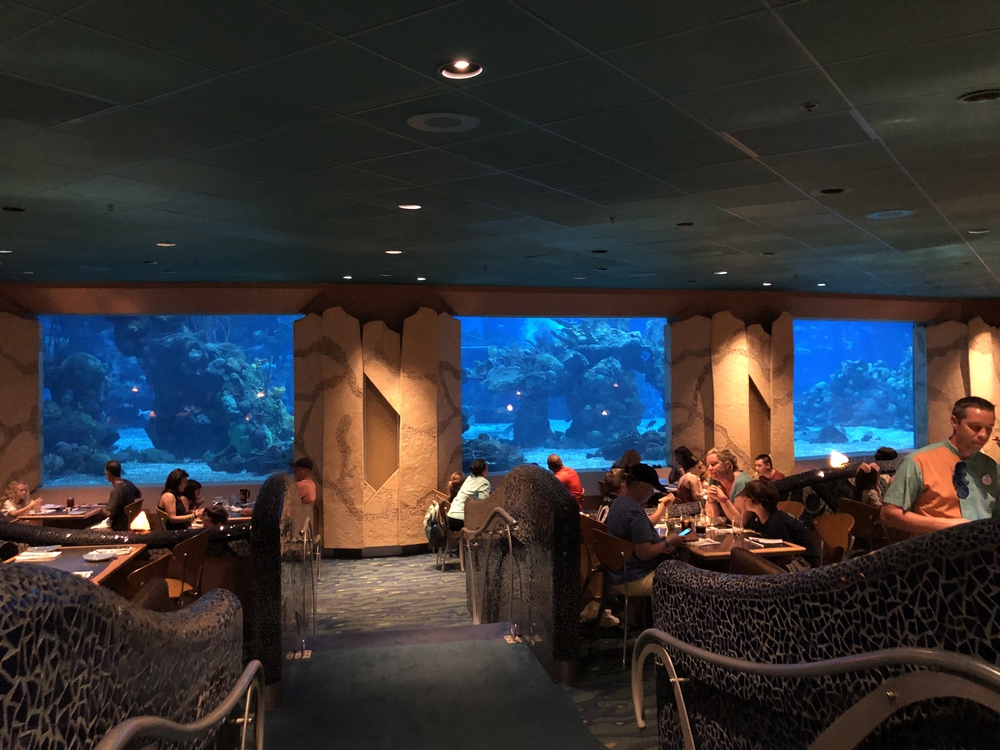 As you enter the main dining room and make your way to your table, your eyes are immediately drawn to the aquarium wall that lines one entire side of the restaurant. Sharks, rays, and all sorts of fish will be your entertainment throughout your meal. There is always something happening in the aquarium, and it’s incredible to be able to observe it from such a close vantage point.

The dining room is terraced, with two rows of tables on each level. The tables that are closest to the terrace wall on any level have the best view of the aquarium. Our table was along one of the walls, and, while we were toward the back of the restaurant, we could see everything happening in the aquarium. The walls that divide the terraced levels are covered in beautiful mosaic tile work. Lighting effects on the ceiling make it feel as though you are dining underwater, and the background music live from The Seas pavilion plays quietly in the background. 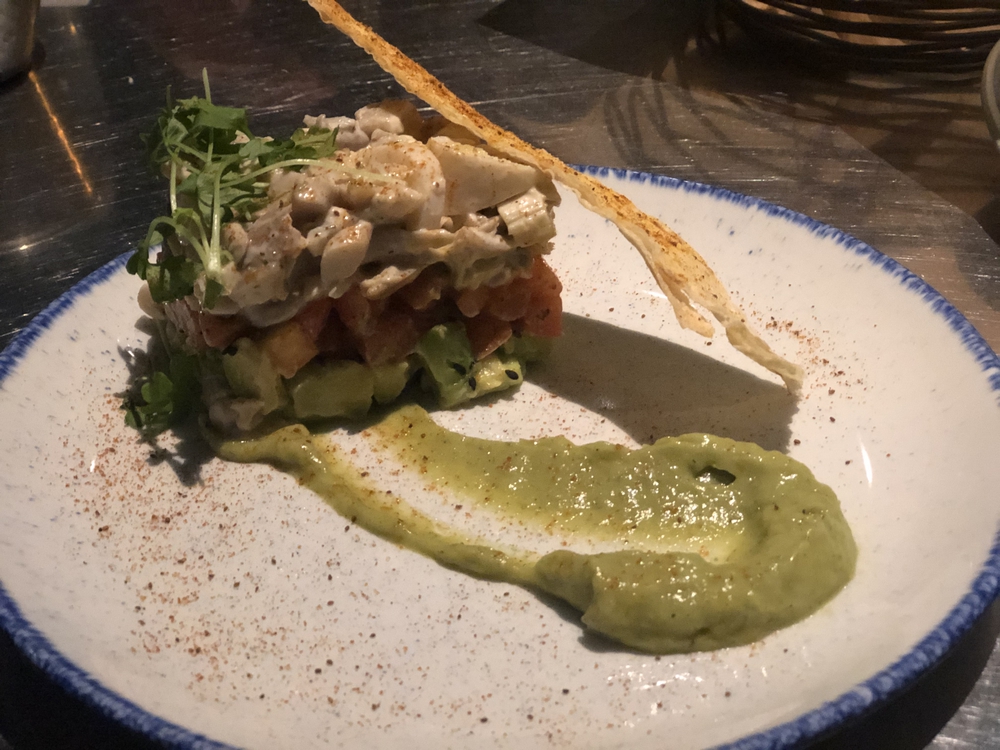 For my appetizer, I decided to try the Mushroom (Lobster-style) Salad for $13. This dish is made of Wild Mushrooms, Hearts of Palm, Tomato, Avocado Purée, and a Lavash Crisp. This dish is one of the new plant-based menu items available at Walt Disney World, and it was delicious. We all agreed that this was a stand out, and it was an incredibly inventive way of serving a plant-based dish in a restaurant that primarily serves seafood. Our server, Ileana, inquired with the chef as to the preparation of the mushroom salad. We had asked questions about it, and she was so kind as to hunt down the answers. The chef explained to Ileana that oyster mushrooms are used in the dish and are prepared just as you would prepare lobster. They were poached and seasoned with Old Bay, and the results taste just like lobster. It blew our minds, to be honest. I didn’t miss the meat at all. 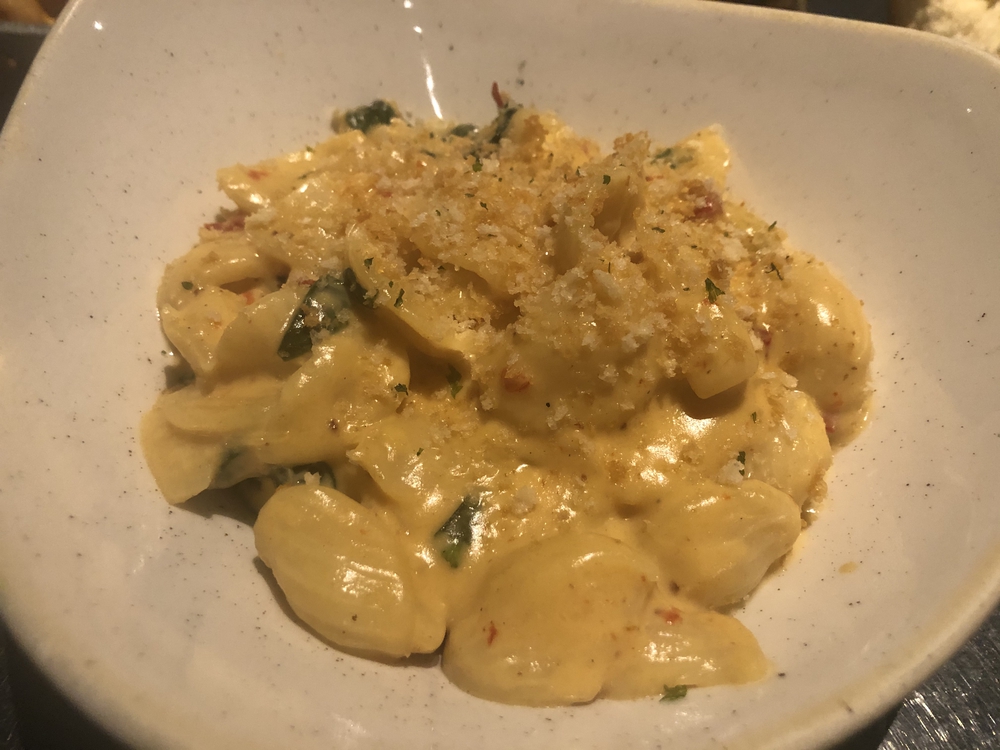 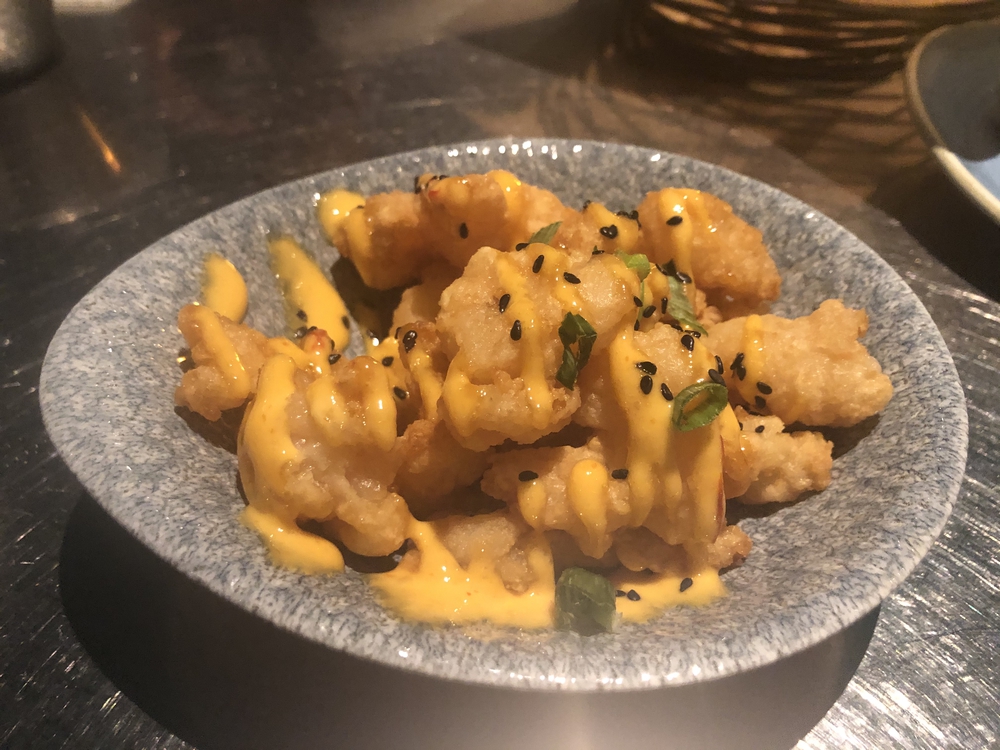 Fiasco enjoyed the Crispy Fried Shrimp ($9) for his appetizer. The shrimp is served with a spicy Sriracha Aioli, and the dish was a hit with Fiasco. It reminded me of a Firecracker Shrimp-type of appetizer that can be found at other restaurants: perfectly fried shrimp, and just a little spicy.

During our meal, Steve pointed out the elevated noise level in the restaurant. You could hear everything happening around you: from cutlery hitting plates to little ones chatting to families laughing. It’s everything you would expect at a Walt Disney World restaurant, but, as Steve pointed out, due to the way that Coral Reef is designed, there isn’t much to help absorb the sound. The noise level is a good thing if your little one has a lot to say while your family is dining there, but it might not be the best spot for a quiet table for two to celebrate a special occasion. 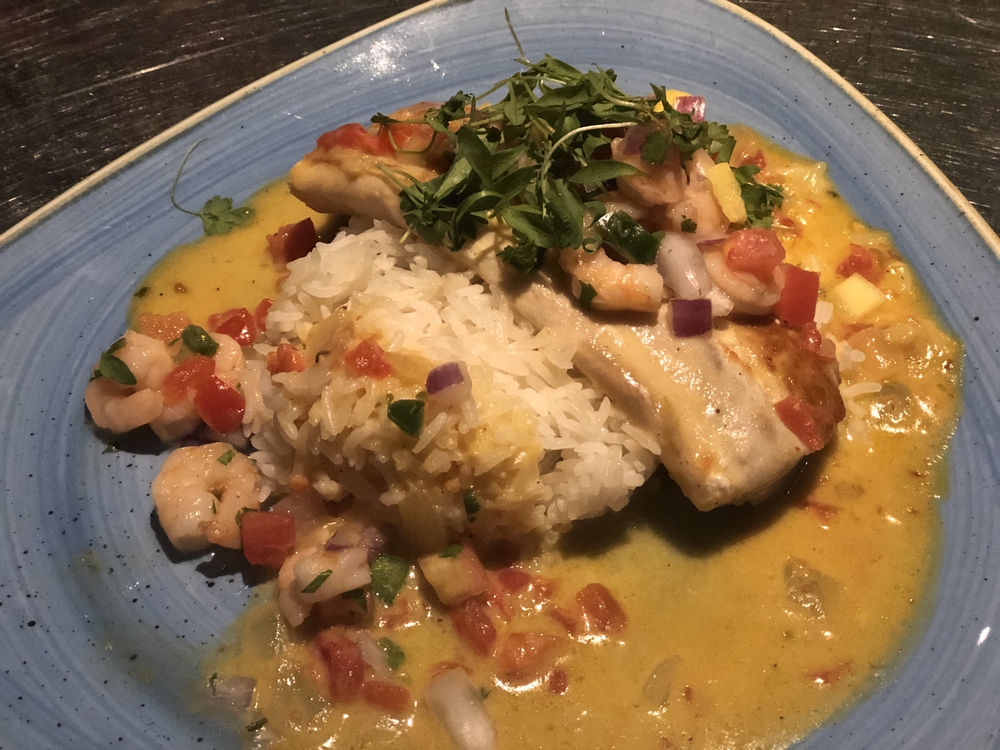 For my entrée, I chose the Seared Mahi-Mahi for $31. It was paired with Jasmine Rice, Coconut and Cilantro-Lime Sauce, Caribbean Shrimp Salsa. Unfortunately, the mahi-mahi was quite dry. That being said, it did have a good flavor. It had a kick to it, as did the Caribbean shrimp salsa. The jasmine rice is available to help tone things down a bit should you need it. 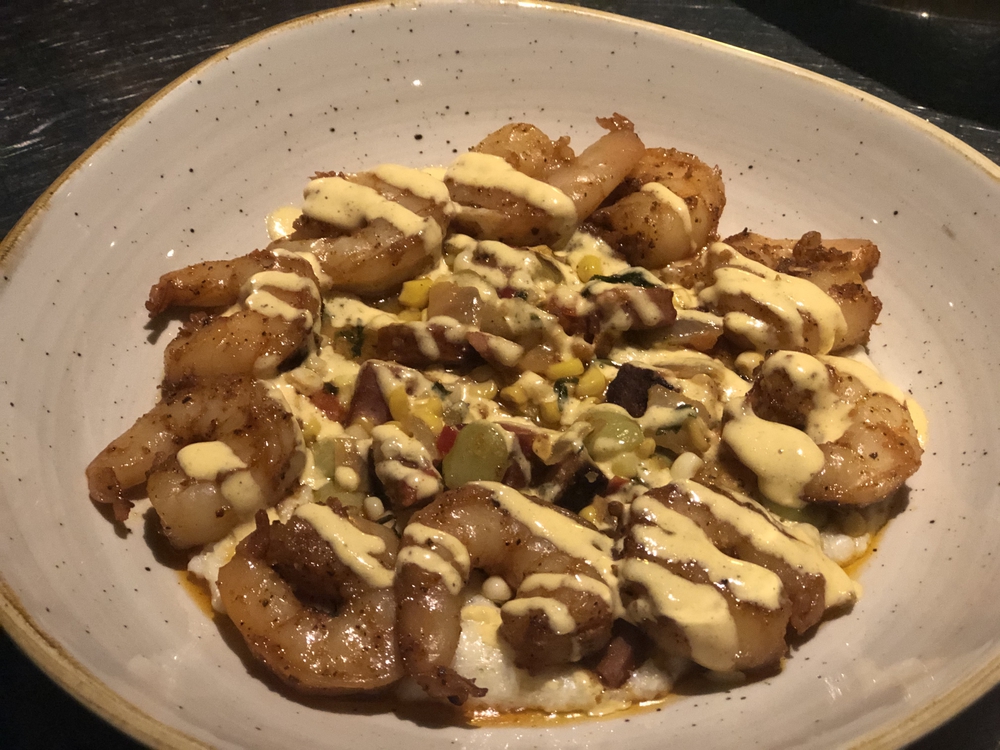 Steve ordered the Shrimp and Grits for $30 as his entrée. This dish consists of Sautéed Shrimp, Cheddar Cheese Grits, Local Corn Succotash, Andouille Sausage, Creole Spice Emulsion. He did note that the flavor was a little less spicy toward the outside of the dish, and he was pleasantly surprised that as he dug into the middle of his dish, things got spicier. Overall, he enjoyed the shrimp and grits, but he felt that the heavy mac and cheese followed by the filling shrimp and grits might’ve been too heavy for an average park day. You might not feel like riding attractions after you’ve had these two dishes back to back. 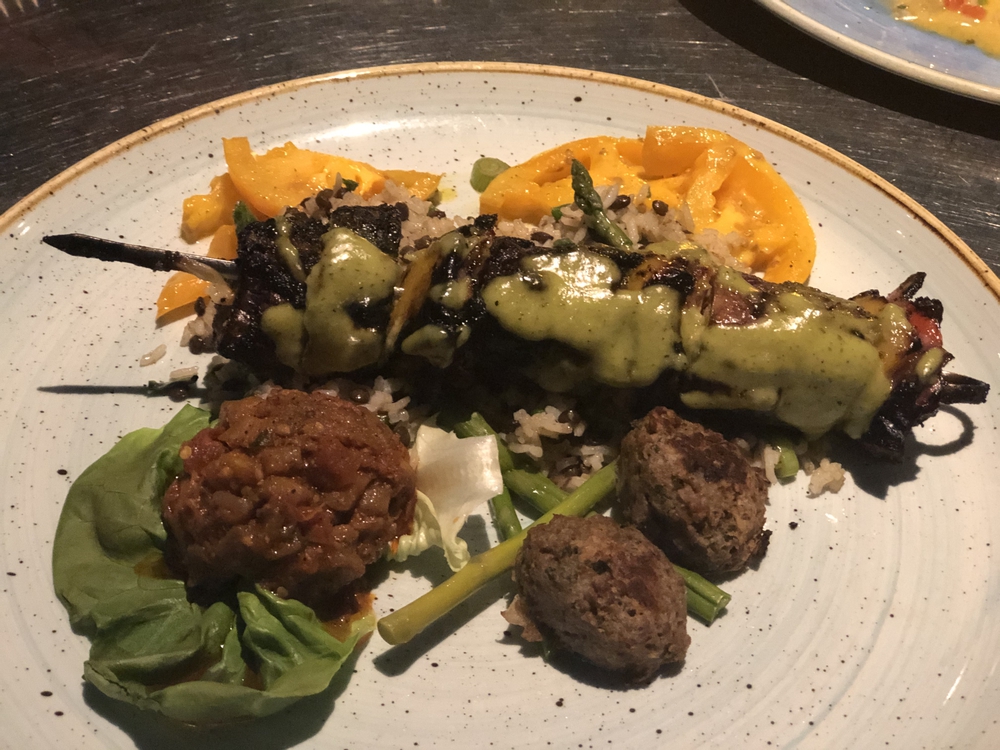 For his entree, Fiasco enjoyed one of the other plant-based options on the menu: the Grilled Garden Vegetable Skewer made with Roasted Kefta, Basmati Rice, and Lentils, and served with Smoked Eggplant Salad. This dish is available for $24. Fiasco loved the flavors and textures at play in this dish. Everything was done so inventively, and he enjoyed every bite. 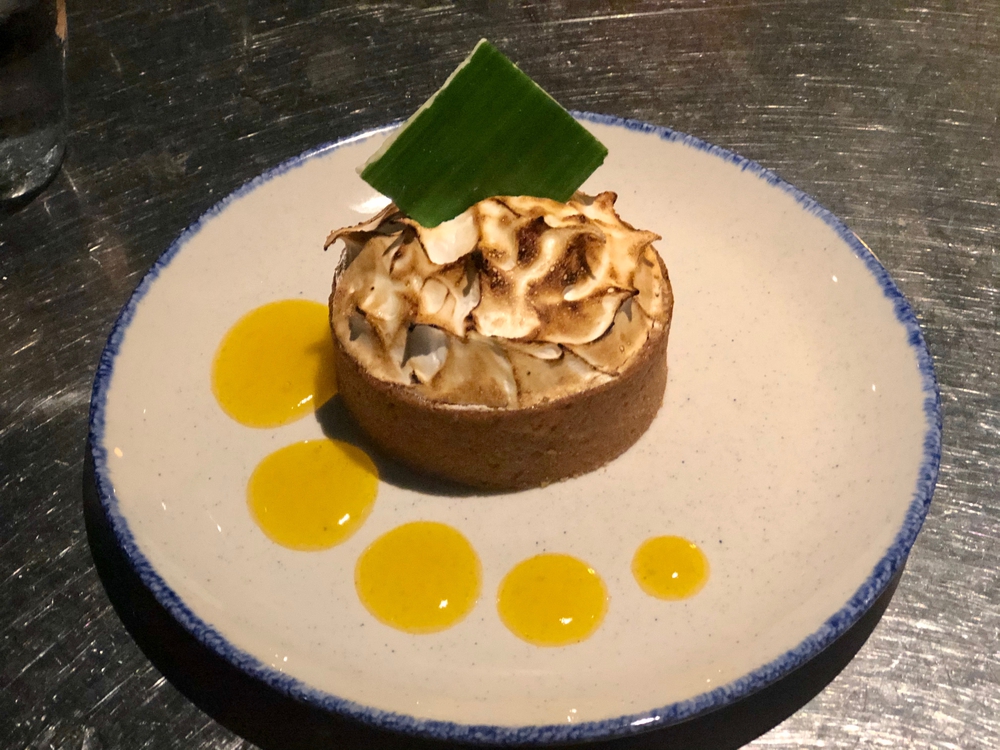 Our desserts were delicious, and we felt they were fairly priced. I enjoyed the Key Lime Tart ($9). The tart was quite large, and could easily be shared by two people. It had a perfectly toasted meringue on top and the key lime taste was nice and tart, just like a key lime dessert should be. 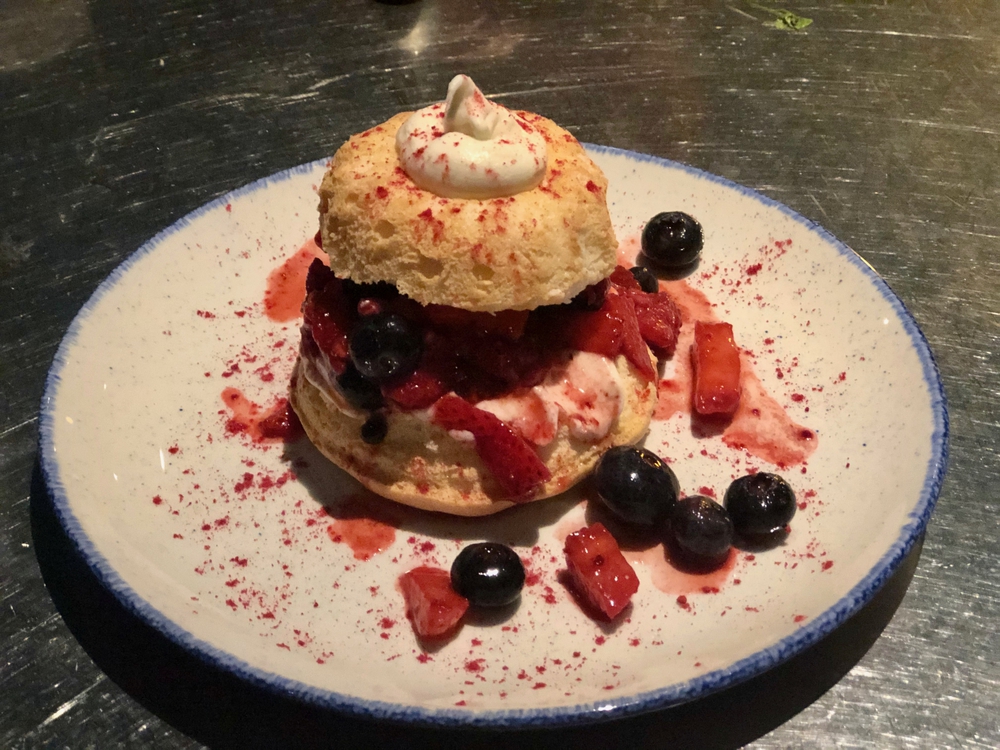 For dessert, Steve chose the Angel Food Cake for $8.50. This was the no sugar added dessert option at Coral Reef, and was made with a fresh berry compote, whipped cream, and a berry glaze. Steve loved this lighter dessert option. 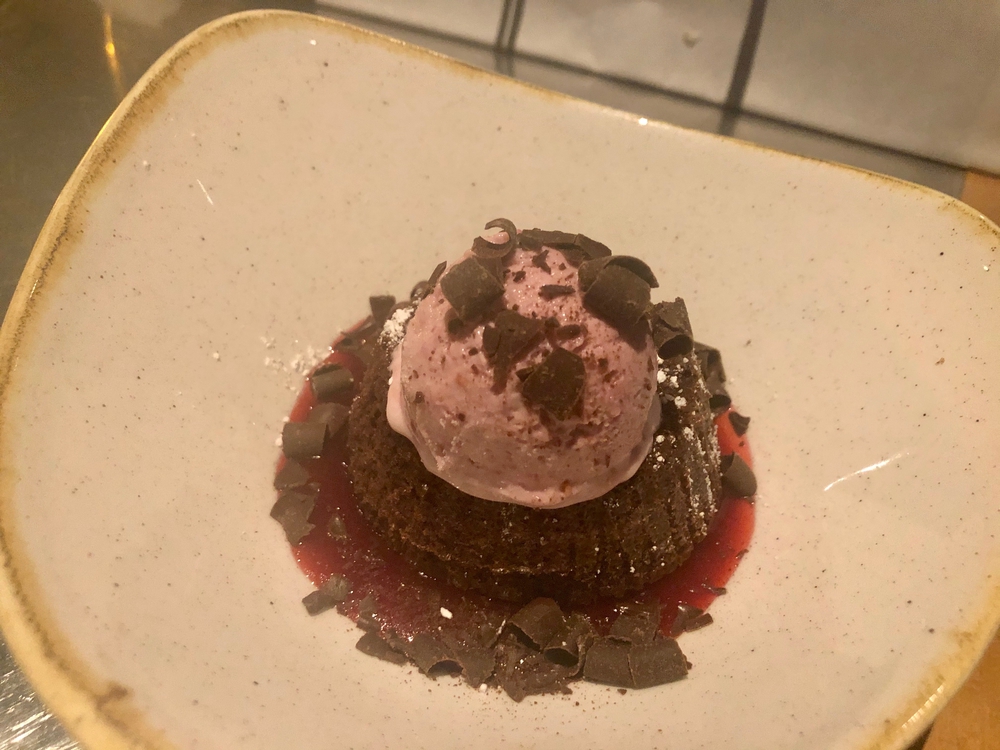 As was recently announced, Coral Reef Restaurant will introduce a special limited-time menu celebrating the 30th anniversary of The Little Mermaid on October 19th.

We enjoyed our time at Coral Reef Restaurant immensely. Our server, Ileana, was wonderful, and we highly recommend that you ask for her if you come by to dine. The surroundings are lovely, and it’s hard to beat the entertainment provided by the undersea creatures on the other side of the aquarium glass. The prices at Coral Reef can be on the expensive side, but it’s a great option if you’re using the Disney Dining Plan and you’d like an incredibly unique spot at which to dine.