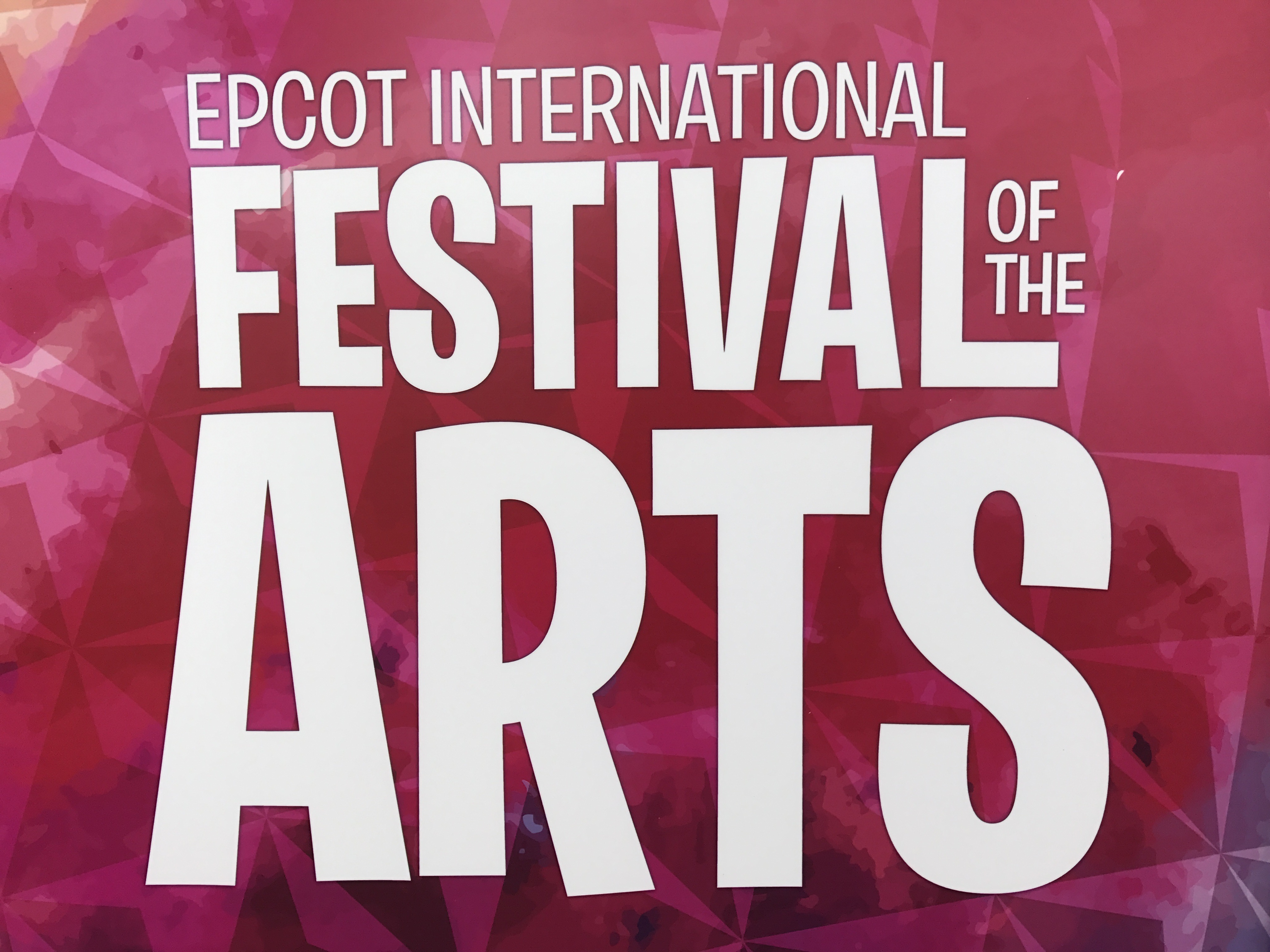 This was the inaugural year of the Epcot International Festival of the Arts. There was an expectation by some that this was going to be comparable to Epcot’s Food & Wine Festival, or the Flower & Garden Festival, but in my personal opinion this festival was very much its own. While there were marketplaces that served food much like the other festivals, the focus seemed to be much more on the art. Throughout the World Showcase, there were Festival Galleries that had not only Disney artwork, but a large variety of art.

We visited the festival on its opening day, and unfortunately, it was raining on and off throughout. This put a slight damper on the day, but with that being said, I personally have high hopes not only for the days remaining of the festival this year, but more importantly for the possibilities for this festival in future years!

When the day first started, I was slightly disappointed with the food as I was really looking forward to the Trio of Savory Croissant Doughnuts and they ended up being very odd tasting. After that, we tried the Deconstructed Purple Sweet Potato Pie, which again, I also thought had an odd flavor to it. But after the first two dishes being disappointing, things started to get better.

The next thing tried ended up being one of my two favorite dishes. It was the BLT at E = AT^2. It wasn’t an ordinary BLT, as it was actually a crispy pork belly served with tomato jam and a soft poached egg. It wasn’t what I was expecting at all, but it was amazing. It was slightly messy, but the combination of flavors made it a perfectly savory treat.

My other favorite dish was the Braised Beef Short Rib at the Cuisine Classique. The beef was extremely tender and literally fell apart as soon as I put it in my mouth.

The presentation of the food was fantastic. I’ve never seen them put this much care and effort into each dish at a festival at Epcot. This was both a good and bad thing. It was good because the food you were served looked beautiful, but the downside was it made the lines much longer because the preparation time was so much longer. As the festival goes on and the crowds get heavier, I’d assume that the cast members’ patience with preparing every dish this way will run thin.

I think there is a lot of room for improvement for next year’s Festival of the Arts, but overall the food was fairly good. I wouldn’t say it is quite as good as the food at the past Epcot’s Food & Wine Festivals, but I still thought there were some really great options.

Epcot is at its best when there is a festival going on. The Festival of the Arts upheld that standard as it did make the park feel more alive and exciting than on a standard day in Epcot. I particularly liked the paint by numbers mural. Guests were given a number and a small amount of paint and a number where they then filled in a small square that matched the number they were given. The idea is that by the end of the festival there will be a completed mural that was finished by the guests. Not only was this a hit, it is something they should expand on in the future at next year’s Festival of the Arts (if Disney chooses to continue the event).

Before it started to rain, there were living statues in Future World. Guests loved this photo opportunity, but in the future this is probably something Disney will want to relocate inside somewhere because of how often it rains in Florida.

Speaking of photo opportunities, there were a ton of great spots throughout the World Showcase to take fun pictures with your friends or family. These locations had iconic paintings and works of art that guests could step into to make it look like they were in the The Scream or the Mona Lisa. PhotoPass cast members were there to take your picture.

There were artists painting throughout the different kiosks which really helped add to the atmosphere, but again, they just needed more. It felt very thin. The idea was there, but Disney needs to invest more money into this event to really complete the atmosphere.

There were a couple things that I was disappointed with at the Festival. First off, they didn’t use the former Wonders of Life Pavilion as the Festival Center. As a Disney nerd who loves to see the inside of a closed pavilion, I always look forward to that. Second, the atmosphere of the festival wasn’t spread out very well. It felt very heavy and deeply immersive in the front of the World Showcase, but there were sections where two or three countries in a row had very little to add to the Festival. Third, I was disappointed that there weren’t more Disney Parks-related art. In fact, there was really only one booth that had Disney-related art, and I had seen most of that art before. I was looking forward to exclusive artwork and prints that would only be available for the festival. If they are going to tout this festival as a special event, then there should be more art than what they already display throughout the resort during the rest of the year.

Overall, the Festival of the Arts was a great event. In the coming years it needs to be expanded, but for its inaugural year Disney did a great job. If there were some small tweaks, this could easily become my favorite festival in the future.