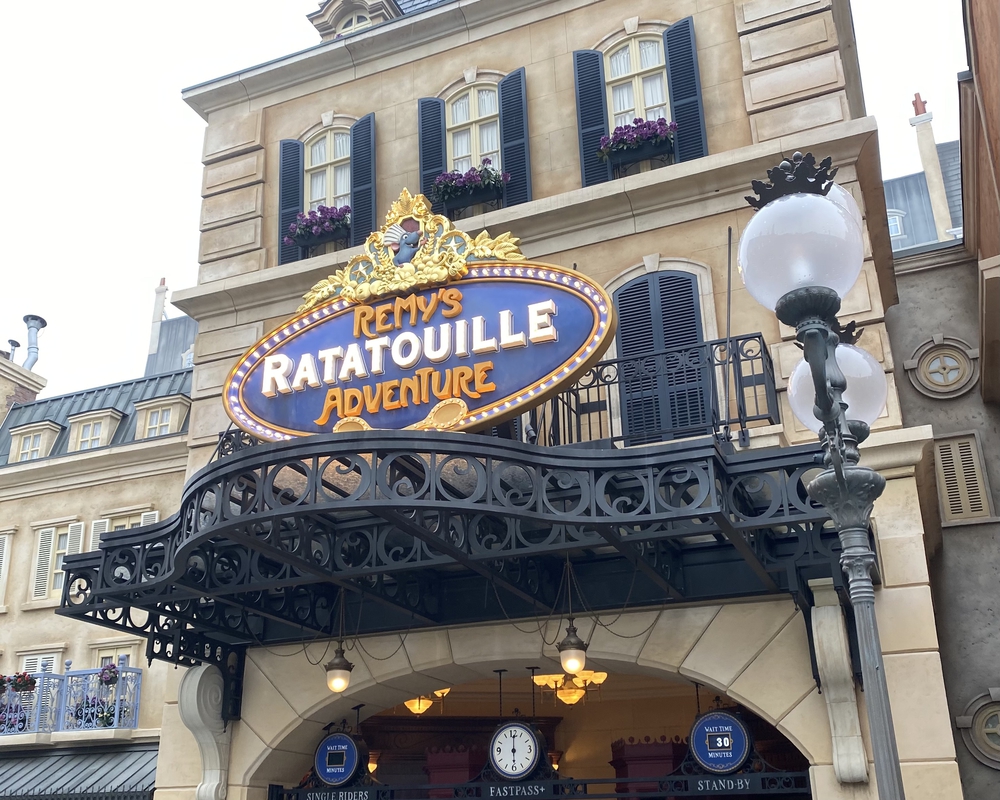 Throughout the month of September, many Annual Passholders and cast members were able to preview Remy’s Ratatouille Adventure at Epcot. I was lucky enough to be part of that group. When I scored that preview, I got so excited because I remember being so in love with the attraction when I went to the parks in Paris. I also really enjoy this movie even if it’s not my favorite. I think the movie has a great meaning behind it and it’s a cute movie. Do you know what’s even cuter? Remy!

The France pavilion expansion overall is very nice and it expands on the idea of feeling like you aren’t in a theme park. This expansion makes you feel lost at times, and I love when a pavilion does that. The queue of the attraction has an outside portion and an indoor portion. The indoor portion has three parts. One section is covered in red wallpaper that has Remy and his brother all over it, which is cute, but nothing out of this world. This hall leads you to the next section which makes you feel like you are in the streets of France and you can see Gusteau’s sign. After this section, the next hallway has all the safety rules along with the do’s and don’ts for the attraction. Following the briefing area, the loading dock appears, which is where you will pick up 3D glasses and enter a vehicle that looks like Remy or Emile.

After boarding the vehicle, you enter the world of Remy and follow his adventures throughout the kitchen. The ride is identical to the one in France which I loved because there are several sections that are in French. The French parts of the ride felt more authentic. The sets surrounding the screens were impressive and made the story feel more cohesive. Just a heads up: there is no element of thrill, but if you struggle with motion sickness on a serious level, then please don’t ride this attraction. This attraction has several sections that could trigger motion sickness. There’s a moment where the vehicles break off from the same path and head into their own tunnels, which was fun but could cause motion sickness to someone that is sensitive to that.

Now how do I feel about this attraction? I saw some people trying to hold it to the same standard as Rise of the Resistance, but there is no way to compare the two. It is important to remember that this ride is identical to the one in France which opened in July of 2014. The attraction may not seem as advanced as our new attractions like Rise of the Resistance or Mickey and Minnie’s Runaway Railway due to it being a copy and paste project. This was meant to add something new to France pavilion and keep the park expanding. I do think this attraction is adorable and great for families. I enjoyed it, but it’s not the best attraction on property, obviously. I am really happy to have something from an international park in our parks because we get to see what the other parks have to offer. I have a feeling I enjoyed this ride more when I was in Paris because everything is better in Paris. With several parts of the attraction being in French it just felt like it was part of the France experience and that’s why it fits so well in Walt Disney Studios Park in Paris. I do believe that Remy’s Ratatouille Adventure adds a nice touch of authenticity to the France pavilion.

The real question is whether it is worth the wait. I wouldn’t wait more than 35 minutes for this attraction. With that being said it’s important to note that the attraction will have a virtual queue very similar to Rise of the Resistance. This is your reminder that Rise of the Resistance will no longer use this method starting September 23rd and will use a normal standby line until further notice. I do think Remy’s Ratatouille Adventure is worth waking up and getting a virtual queue for because it’s something new. I recommend at least doing it once so you can form your own opinion on the ride and see if it’s worth it for you. For me, it’s worth a 30-minute wait and anything above that might just be too long. All in all, it’s a cute ride, it’s a new ride and it’s part of a new expansion of the best pavilion at Epcot.