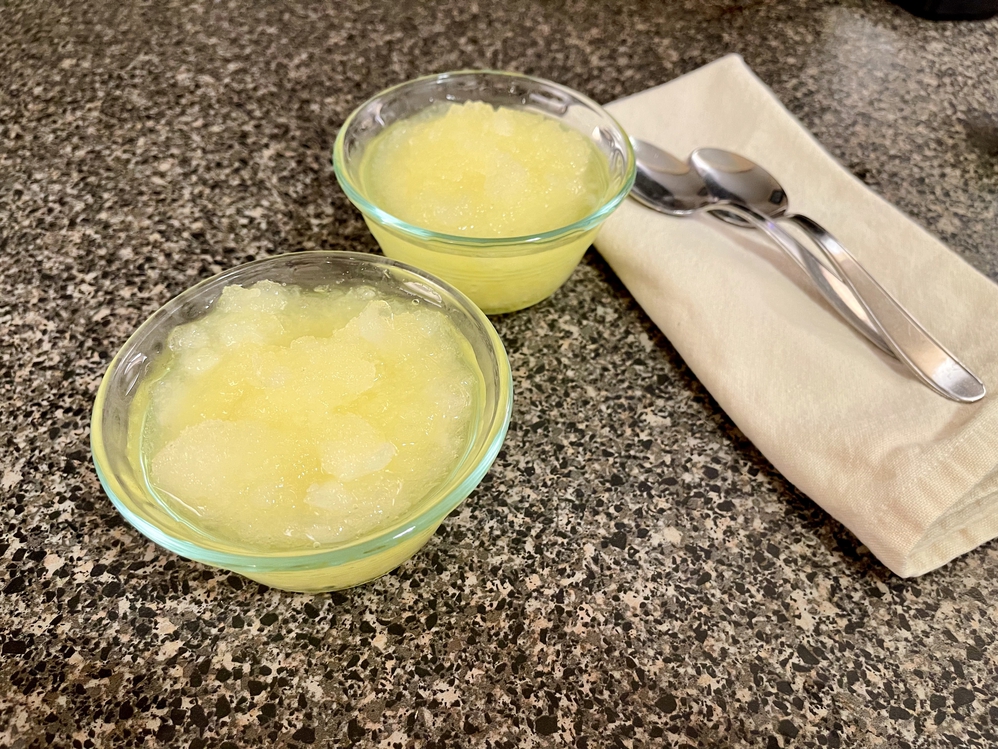 Seeing as how today is the very last Saturday of summer, I figured that you and I should celebrate with a traditional summertime treat. Disney released the recipe for Abominable Snowman’s Lemon Snow Cones a couple of weeks ago, making their arrival perfectly timed to squeeze just a little bit of additional fun out of the waning days of summer. Not that you and I need much of an excuse to make a sugary Disney treat, right?

When I was home visiting my family in Maryland last month, my mom opened the pantry door and pointed to the Snoopy Sno-Cone machine that sat on the shelf. That snow cone (or Sno-Cone) machine has been sitting there since 1987, and Mom declared last month that she’s finally ready to get rid of it. I should’ve grabbed that box off the shelf and shoved it into my suitcase right then and there, but I didn’t (so sorry, Snoopy). I did, however, talk to my sister, who is the technical owner of said snow cone machine, and upon hearing of Snoopy’s impending doom, she decided that she will be swinging by our parents’ house soon to save Snoopy from the trash.

We loved that snow cone machine as kids, and when I explained to mom that you and I would be making Disney-fied snow cones this weekend, I asked her to please take a picture of it. She was happy to oblige. Thanks, Mom. Now please put Snoopy back into the box and step away from the trash can. Ahem.

There’s just something about a snow cone, isn’t there? It’s quintessential summer in a cone or a cup. And you can doctor it up in a million different ways. Of course, my favorite way to eat a snow cone is absolutely drenched in syrup. Don’t give me just a small swish or squirt or drizzle. Drown it in that sugary syrup and I’ll be a happy camper.

If you’ve been to Disney California Adventure since the debut of Pixar Pier, you’ll know that Monster’s Inc.‘s Abominable Snowman has his own treat stand. What he sells at Disney California Adventure is very different than today’s Saturday Snacks recipe, though; it’s more of a slushy/lemon soft serve combo type of thing. And it’s delicious. If you’re headed to DCA in the future, please add a stop by Abominable Snowman’s stand to your to-do list. What we’ll be making today more closely resembles what he whips up in Monster’s Inc. when Mike and Sully end up in the Himalayas. Insert John Ratzenberger yelling a hearty “Welcome to the Himalayas!” here.

Today’s treat is an easy one. Syrup and shaved ice, right? There’s not much that you can do to complicate a snow cone. However, the syrup that Disney has us making for the lemon snow cones is made from fresh lemons, so maybe you can complicate things after all.

Off to the store I went to purchase a bag of fresh lemons and a fresh bottle of corn syrup. We’ll be using 2 tablespoons of corn syrup in this recipe, and it’s just not something that I regularly use. The bottle that was hanging out in my pantry expired in 2018, so I figured that a fresh one was called for.

Today’s recipe also had me buying a kitchen gadget that I’ve had my eye on for years but had never gotten around to actually purchasing. I feel like 2021 is the year for me to procure all of these small kitchen gadgets that I feel like everyone else has in their kitchens but that I never actually picked up for myself. I headed to the store and bought a citrus juicer. It was right at $10, and I figured it would more than pay for itself with having to at least squeeze 6 lemons for this recipe. I love the idea of freshly squeezed lemon juice or orange juice or whatever, so I was really excited to finally be in possession of a juicer. I felt like such a grown-up.

The recipe starts out by squeezing the lemons to make roughly 1 cup of lemon juice. Like I said earlier, it’ll depend on the size of the lemons that you’re using in addition to exactly how much elbow grease you’re willing to put into squeezing them. It took me 8 lemons to reach 1 cup of juice, and I was glad to have the 2 additional lemons just in case.

My next step was to grab a medium saucepan out of the cabinet and pour in the cup of freshly squeezed lemon juice, 2 cups of sugar (yes, you read that right: TWO CUPS of sugar), 2 tablespoons of corn syrup and 1/4 cup of water. I stirred everything until the sugar melted and the ingredients were completely combined.

The next step is to remove the mixture from the heat and allow it to cool completely. I poured the mixture into a measuring cup, let it hang out on the counter for a while, and eventually finished off the process by sticking the syrup into the refrigerator. I had a Dreams Unlimited Travel event to head over to the Magic Kingdom for (how fun is that?!), and the syrup would just have to do its thing in the fridge. Spoiler alert: it did just fine.

Because I am currently short one snow cone machine (again, I should’ve grabbed Snoopy and made a break for it), I did a little research on the internets and was assured that I could indeed use my blender to shave ice. Easier said than done.

I filled my blender with ice cubes, and while the first bit of ice cubes actually did shave after pressing the “ice crush” button over and over again, the rest did not. Those cubes on top just sat there and stared at me. And it wasn’t until I emptied out the blender that I discovered that the bottom part that had initially shaved had actually been so cold that it formed a ring-shaped ice cube around the blades at the bottom of my blender. Fantastic.

I tossed everything into the sink, ran hot water in my blender pitcher to melt the ice ring at the bottom of it, and began again. This time, I used crushed ice and only filled things up roughly 1/3 of the way up. That tended to work a little bit better than the first go ’round, but the best results came from using plain old ice cubes, just a bit at a time. I put in a handful of cubes, pulsed them in the blender to shave them, poured the shaved ice out and repeated. It wasn’t perfect, and it certainly wasn’t Snoopy Sno-Cone quality, but it would do in a pinch.

The recipe now calls for you and I to combine the shaved ice and the lemon syrup in a large bowl. We’re supposed to mix the two until the ice is fully covered. When I did this, things got a little slushy. And I must say, to be completely honest, that I believe I used just a bit too much syrup.

That being said, I stirred everything up and proceeded to scoop the snow cone mixture into two small ramekins. I did actually consider purchasing paper cones, but decided to use what I already had on hand. I’m all for going all the way with fun recipes, but I knew that my ramekins would work just fine.

Simple and sweet. That’s exactly what this recipe is. That lemon syrup is absolutely amazing. Fresh lemon juice? Two entire cups of sugar? Yes, please. If you’re anything like me, you’ll find yourself dreaming up all sorts of ways to use that bright yellow syrup. I personally think it would be amazing in a cup of fresh iced tea. Or a cup of hot tea. Or just about anything else.

The lemon flavor in the syrup is so bright and delicious, and the syrup itself is everything that you would want it to be. This is an elevated snow cone. Don’t get me wrong; I love a good county fair snow cone. However, Disney’s version is a step above.

When I next make the snow cones, I’ll be skipping the step where we are to combine the shaved ice and the syrup in a bowl. I just feel like that’s fairly unnecessary. Shave that ice, pour that lemon syrup all over it, and scarf it up. Done.

I will also either be borrowing my little sister’s Snoopy Sno-Cone machine to shave the ice or picking one up myself. Finely shaved ice will make all the difference for this recipe. And while the Internet assures us that we can shave ice in a blender, it’s just really not the same. And I think they lie. Sorry, Internet. If you’re anything like me, you’ll end up with partially-shaved-somewhat-chunky-somewhere-in-between ice, and it detracts just a bit from the overall enjoyment of the treat. That being said, I enjoyed every bite of my snow cone. Like I said when we made EPCOT’s Tres Leches Cake and again when we baked the Grand Floridian’s Classic Scones, I love the flavor of lemon. Lemons really can do no wrong. So ice, lemon, and a whole lotta sugar equals one summertime treat that made this Disney-loving girl pretty happy.

Whatever you get up to this last weekend of summer, I hope that it’s filled with sweet things. Be sure to get some rest, and don’t forget to eat something delicious. Thank you so much for reading, friends. Have a great one!

Ready to savor a little Disney summer snack fun in your own kitchen? Today’s recipe is below: