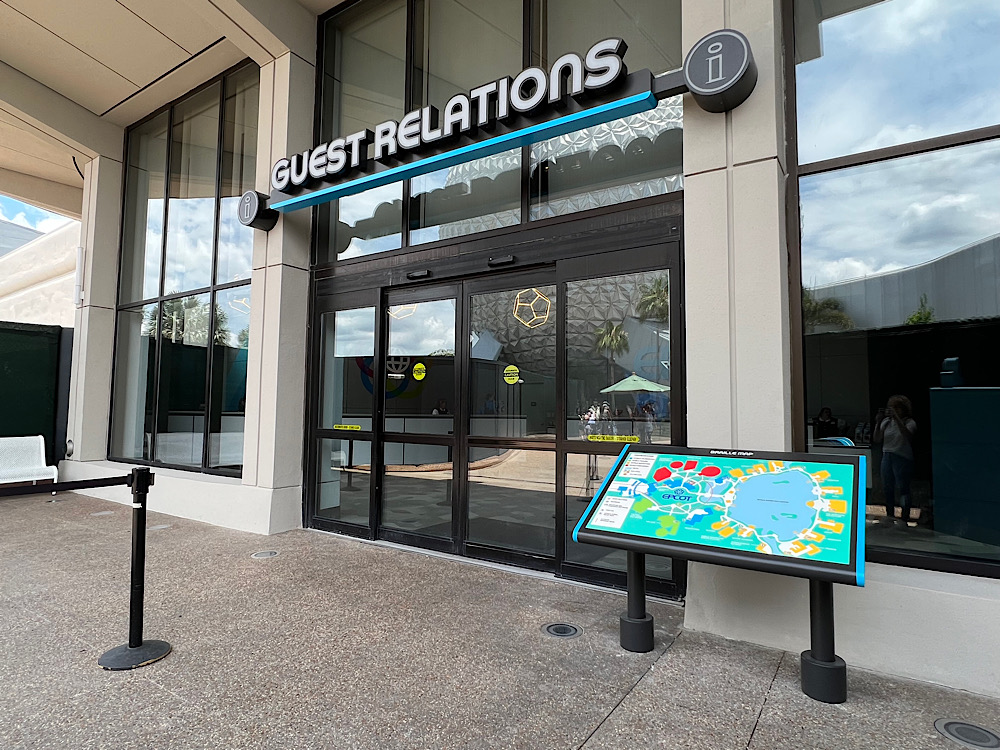 EPCOT’s Guest Relations location reopened this week after a two-month period of refurbishment. The end result is a mix of modern touches with homages to the park’s past.

The intentional design begins even before guests step into the new lobby. The park’s braille map, seen during refurbishment mounted to one of the construction walls, is now promenently displayed on a stand just to the right of the lobby’s doors. The new Guest Relations sign follows the design of the rest of World Celebration, and features World Bold font.

The lobby itself incorporates the colors found throughout the area. The park’s name (again, in World Bold font) is a focal piece behind a long counter. The lower height of the counter at the end of the expanse is accessible for guests using mobility devices.

The rounded counter that guests have used over the years remains, with the flower-inspired park logo displayed behind it (be sure to stop and read Marty Sklar’s take on this iconic park logo). Guests enter the space and are greeted by a Guest Relations cast member who will direct them toward an available cast member stationed at one of the counters.

The lighting in the GR lobby? Pretty stunning. As we’ve seen in Connections Eatery and Cafe, the lighting fixtures are statement pieces that harken back to the history of the park. Three of the new Guest Relations lighting fixtures have been installed thus far, with a fourth on the way.

The new lobby, right down to the carpet that features geometric shapes that echo those found in the lighting above, is a bright, clean, and intentionally-crafted space.