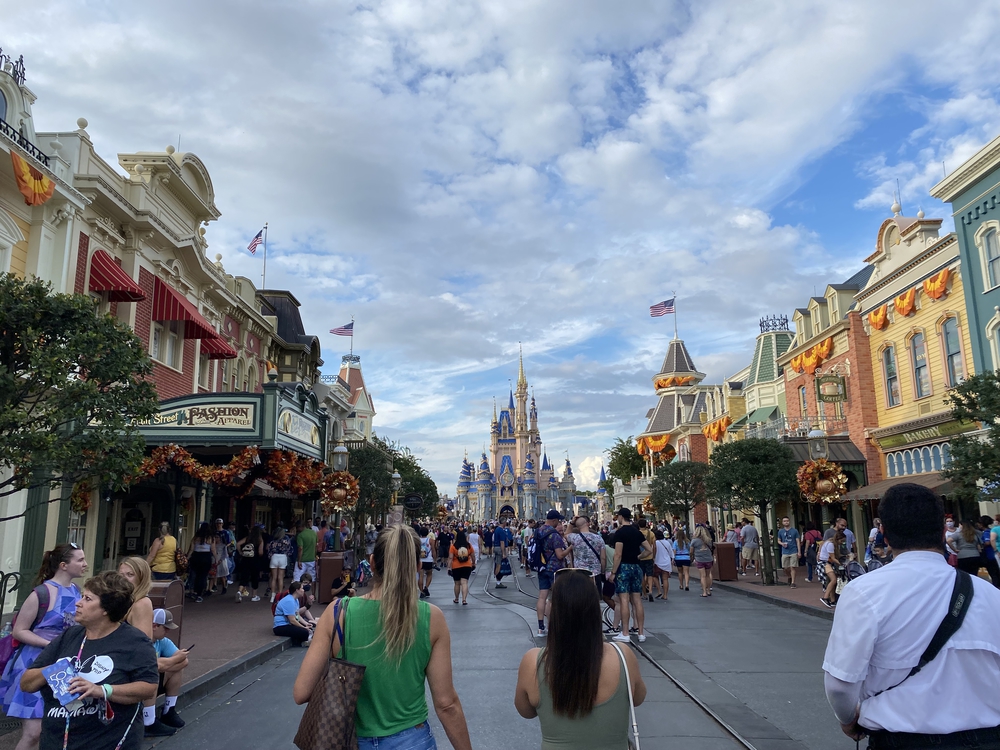 Magic Kingdom just turned 50 years old back in October of 2021, being the first of our four lovely parks here at Walt Disney World. Magic Kingdom sometimes gets a bad reputation due to the process and time it takes to get in the park and the lack of good food. Even though Magic Kingdom has those obstacles, I think there are many great things about the park, and that is what I want to focus on: the best of Magic Kingdom.

Cinderella Castle is first up on this list of the best things at Magic Kingdom. Making that turn onto Main Street USA is always the best, in my opinion, part of being at Magic Kingdom. Seeing the castle down the street always fills me with magic and washes away all my outside world stresses. There are days when all I want to do is lay on hub grass and stare at the castle. Whenever I bring a friend or family member that’s never been to Disney before, and I take them to Magic Kingdom; I love to watch their face as they turn that corner. I have had friends cry, gasp, smile ear to ear, or jump with excitement. Cinderella Castle isn’t a sight you see every day. Being a local, I take it for granted, but when the parks shut down in 2020, all I wanted was to see that beautiful castle and never take it for granted ever again. So now, every time I visit Magic Kingdom, I spend an extra moment admiring and appreciating the castle.

The six different lands throughout the park are worthy of being on the best of Magic Kingdom list. The creativity, the theming, and how each land is immersive are awe-inspiring. My favorite land is Adventureland. Not just because I love Pirates, but because I love the theming; I think it is so unique. Where else can you find a spitting camel?! With that being said, each land has a unique aspect, like Frontierland has such a different color palette compared to the other lands and has two mountains. Fantasyland has a way of making you feel like you are in a storybook with all your favorite characters, from Winnie the Pooh to the Little Mermaid. This diversity between each land gives families more than they can do at other parks. Of course, Magic Kingdom tends to feel like it’s made just for kids, but I do think this park is also fun for the adults that are kids at heart.

Magic Kingdom is close to some of the best resorts on property, and in my book, that counts as a best of Magic Kingdom. Park days can get long and sometimes stressful, leading to needing a few hours outside the park to rest. Having the monorail right outside the Magic Kingdom creates plenty of opportunities for guests to explore and recharge. There are great food options on the monorail loop that can give you that magical feel while being minutes from the Magic Kingdom. I do this all the time, whether it’s to grab a bite at Contempo Cafe or to relax on the beach at Disney’s Polynesian Village Resort.

At this moment, Magic Kingdom still lacks a parade, but we should have the Festival of Fantasy back very soon, which is on the best list. For now, though, we have the cavalcades, and I believe that Magic Kingdom has the best cavalcades out of all the parks due to all the characters that can be spotted throughout the day. My favorite one is the princess cavalcade. It is just so beautiful and magical. I’m 25 years old, and I still cry each time I see the princesses.

All in all, Magic Kingdom is a magical and nostalgic place that has some great attractions and excellent theming. A trip to Magic Kingdom is never dull, and it may have some hiccups, but the outcome is beautiful.

What’s your favorite part of Magic Kingdom? Let us know in the comments!