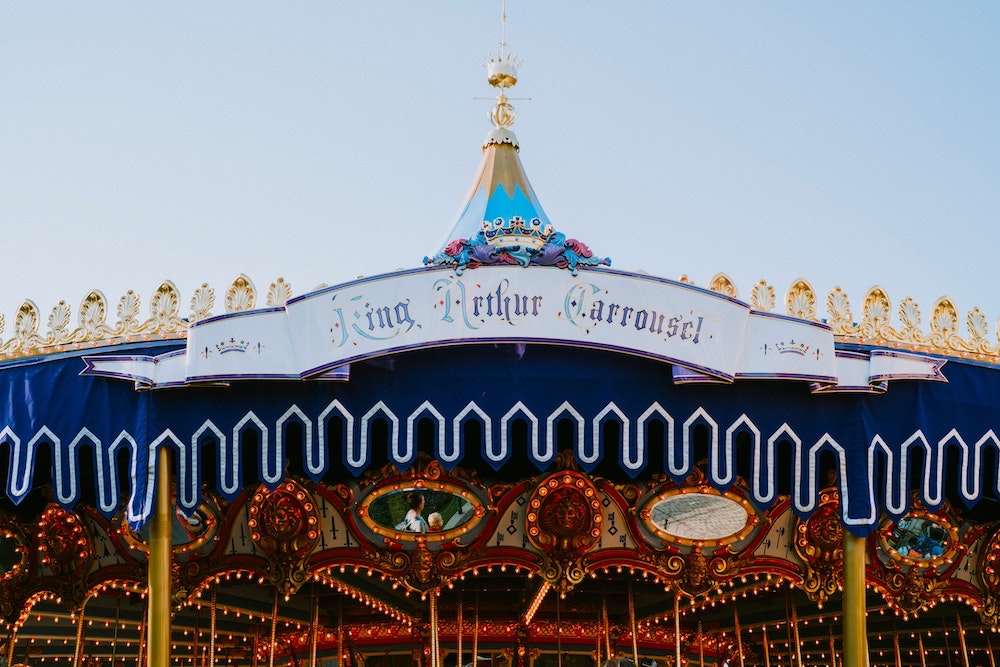 Welcome to a new series that I have wanted to start for years. In A Brief History of Disney, we will be looking at attractions, one at a time, taking a deep dive into their history and how they came to be. Trust me; you will be surprised to read about how some of your favorite rides came to life. We are going to kick this off with a Disneyland original, the King Arthur Carrousel.

Nestled in the heart of Disneyland’s center, Fantasyland, lies the historical King Arthur Carrousel, a permanent fixture of the park featured heavily in opening day media back in 1955. You might not know that these uniquely hand-painted leaping horses were not the only creatures stationed on this masterpiece, and many are not in their original positions.

Said to be built by William Dentzel in the 1870s, this ride spent most of its early life in another country altogether. Before reaching its well-known home in Walt Disney’s flagship park, this attraction was first documented at the Sunnyside Beach Park in Toronto, Canada, in 1922, featuring a combination of animals across three courses.

You have probably heard the story of the merry-go-round at Griffith Park in Los Angeles that inspired Walt Disney to imagine the concept of a family-centric theme park where everyone could enjoy the fun. Though the carrousel isn’t the same one that Disney’s daughters enjoyed, it was an integral part of Walt’s vision for Disneyland.

Once Disney purchased the carrousel, a California-based company called the Arrow Development Company was tasked with modifying the attraction and preparing it for opening day. Primarily, the work consisted of the structure being widened to four courses instead of the original three to cope with anticipated crowd capacity. Additional carved horses were acquired from all over North America, some in the poorest conditions needing refurbishment.

The horses weren’t the only changes to seating onboard either. The original wooden chariots were taken off the structure, and the woodwork was repurposed and used in other attractions, including some of the passenger carriages of the Casey Jr. Circus Train.

Due to the overwhelming popularity of the original single white horse, in 1975, all of the horses on the carrousel were painted white, contributing to that signature regal look we love to photograph. Over thirty colors are used on the horses, which are touched up every night after park closing, and no two are the same, each with their own name as well.

The ride has only been closed for major renovations on three occasions, 1983, 2003, and 2010. Though primarily for cosmetic changes and additions, the 1983 closure actually moved the entire attraction backward several feet to open up the castle courtyard and improve the view as guests emerged from the castle. On April 8, 2008, Jingles, said to be Walt’s personal favorite and the lead horse in the Carrousel, was rededicated to honor Julie Andrews when she was chosen as an honorary ambassador.

Are you wondering about the spelling of Carrousel? Disney adopted the double “r” spelling for the attraction even though it is commonly spelled Carousel in the English language.

I hope you enjoyed learning more about this beloved attraction with me!

ps. If you’d like to dive even deeper into the Disney Carrousels, be sure to check out this episode of the Connecting with Walt audio podcast.