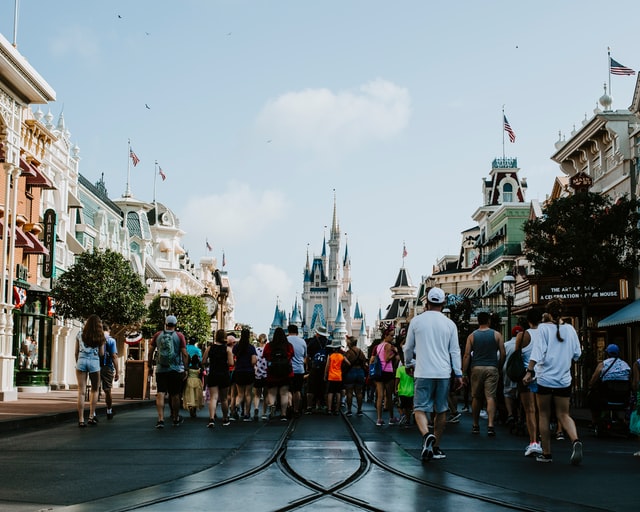 This week, we are taking a light-hearted look at some of those classic fashion mistakes that get made in Walt Disney World. If you wonder why I have singled out Orlando as the principal offender, it's because WDW is where the worst attire faux pas can be found. You know it's true!

Before we get started, I wanted to quickly jump in here and just clarify the following content. This is not about judging people's appearance or their bodies. The fuel for these notes below were things that are inappropriate in front of children in a family-friendly theme park that would cause kids, in particular, to have unnecessary questions or feel uncomfortable. This isn't a catalyst for any sort of 'body-shaming'; instead, a look at the choices we make as adults in an environment where we are responsible for a little bit of decorum. Not to mention, most of these are already part of the dress code, despite not always being enforced.

So, let's begin with a few of the extreme fashion choices (for lack of a better phrase) that are commonly misplaced in Disney Parks.

You know, the ones barely visible under a t-shirt or paired up under a midriff and with the other cheeks hanging out? Either way, this isn't a good look for Disney.

The last thing we want to discuss with our children is the questions that arise from wearing clothing that looks more like underwear. Yes, honey, it does look like that young lady forgot to put her pants on this morning, but no, we shouldn't go and buy her some.

We all saw Modern Family's episode when Gloria confidently marches into Disneyland Park in stilettos and exits wearing Minnie Mouse slippers. This wasn't just to make good TV either. I have actually seen people lining up outside in the morning wearing the most ridiculous footwear imaginable. Not for special events, but just an average 12-hour romp in the park in spiked heels. I don't know if I am confused or in awe of their ambition.

Funnily enough, I never see them leaving in it. Perhaps they've swapped them out for something else in the nearest shop, or maybe given up and end up back at their resort two hours later. Either way, my Sketchers might not be super pretty, but they keep me on my feet.

If you haven't seen this yet, think yourselves lucky. On two occasions, I have spied a fellow adult sporting their favorite pj's when visiting the parks.

Admittedly, one was a onesie in Disneyland, not Walt Disney World; and no, it wasn't a cute onesie or character-themed, or a special occasion, just an old, dirty one with what I can only hope were pizza stains on it.

This one is most commonly seen on men, with their shorts slung so far down their hips that even the slightest movement forward can give everyone a lovely view of their great divide. I know this might make me old, but Mate, pull up your pants or put on a belt; no one needs to see that!

Even in the '90s, there was enough respect to keep your underwear pulled up underneath, these days it seems to more of a commando look they are going for.

Even though it is against the dress code for Disney parks, sometimes you will see the odd shirt with swear words on it. I can only imagine they are hidden under a sweatshirt or something similar on entry. Some might be subtle, others are more daring in their visibility, but it always makes me wonder what sort of person does that? Do you feel cool wearing the F-word across your chest in a theme park filled with kids? Or, are you just a tool? It's the latter.

I can swear like a sailor in the company of friends and when there are no children around, but there is a time and a place, and that place is not Walt Disney World. Luckily, Disney takes this seriously, so these instances often only last a few minutes before a cast member asks them to turn it inside out, if nothing else. But still, it takes a certain type of person, you know?

Another one that is supposed to be against the dress code but isn't always enforced. I hate bras just as much as the next person, but who wants to be thrown around on a rollercoaster and worrying about the coverage of their chest when that attraction photo gets taken? Umm, no, thank you. How hard is it to strap them in and put a shirt on?

Is this about wearing running tights when you probably shouldn't? No, and to be honest, that is a category I would openly place myself in most of the time. I will often select covered-up comfort in place over what probably would be better suited to my body's shape. All-in-all, I am not that fused about what other people wear. You-do-you, and all that. However, there are a few things that cross the line, and they are usually moments of exposing flashes of private parts to families around you. If that is being judgmental, then guilty as charged.

What has crossed over into the fashion dark side while you've been in the parks? Let me know the biggest mistakes you've seen below. Remember that unflattering or poorly coordinated outfits aren't what we are looking for, more the completely inappropriate ensembles you can't believe made it out of the house, let alone into the parks in front of families.