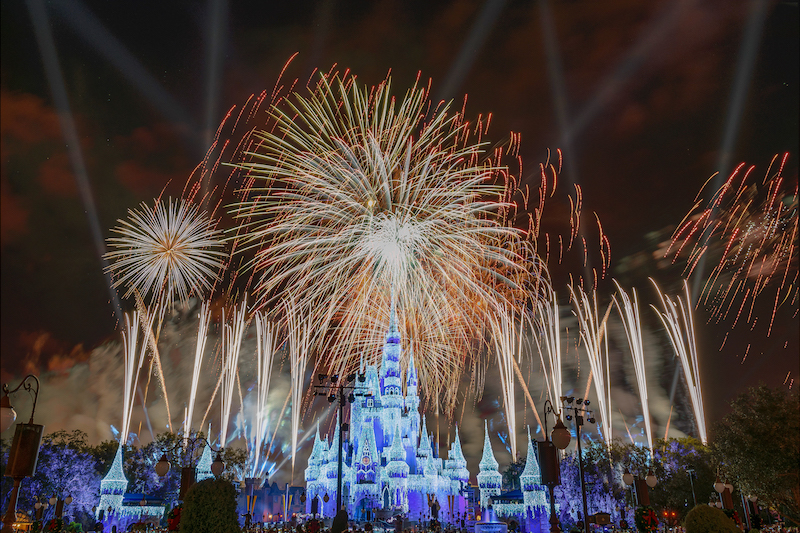 Why pay for a reserved spot during the fireworks or a show or parade when you can just arrive early and secure one yourself? That’s how we always felt when it came to Disney. A dessert party? We’ll throw our own dessert party! We’ll stake out a spot around an hour or more before the show starts, then send someone to go get a treat at the Main Street Confectionery or Dole Whips.

We finally caved and tried the Jingle Bell, Jingle Bam! dessert party two years ago and were completely underwhelmed. We weren’t big fans of the offerings, and while having a reserved spot was nice, we could have easily arrived ten minutes before the show started and still found a good spot by ourselves.

After reading countless positive reviews on Disboards, we decided to try the dessert party at Magic Kingdom. Obviously Magic Kingdom is crowded year-round and finding a spot for the fireworks will always require some planning. It’s especially crowded during Christmas week, though, and straight up chaotic on December 30th, when the park hosts its New Year’s Eve “dress rehearsal” and features the Fantasy in the Sky fireworks.

The reserved viewing area and freedom to sit and eat before the show really helped alleviate stress and ensure a far-more enjoyable experience. The park also has late-night Extra Magic Hours on December 30th. In the past, we’d stand around waiting for the fireworks for an hour or longer. By the time the Extra Magic Hours kicked off, we’d be mentally and physically exhausted after jostling for position on Main Street. Not to mention, my parents are getting older and don’t have the patience or stamina they once did. With the dessert party, we were able to sit and relax a while before being escorted to the reserved viewing area.

With the dessert party beginning at 10:15 pm, we decided to eat a fairly early dinner to avoid being too full to enjoy the offerings. We ate around 4 pm before heading to the park and found this to be the perfect amount of time between meals. Had the dessert party been for an earlier showing, we probably would have eaten an earlier lunch and skipped dinner.

Upon arriving for the dessert party, my dad made friends with a lady waiting in front of us. The woman felt compelled to tell my father that she did the dessert party last year and that it was a “train wreck and a waste of money.” We all kinda looked at one another, worried that we made a mistake. Of course my mother was the only one to point out that “if she hated it so much, why’d she come back?” We shrugged it off and proceeded to the podium where the cast member was excited to check us in. We were escorted to our table by a cast member who listed off the different dessert offerings, then explained how the dessert party worked and where we should go to view the fireworks. So far, so good.

We helped ourselves to the buffet shortly after being seated. I was impressed with the offerings, which seemed a lot more appetizing than what was served at the Jingle Bell, Jingle Bam! party. Savory options included an assortment of cheeses. I was really happy to see the popular Cheeseburger Spring Rolls, as they seemed to elude me every time I tried to find them in Magic Kingdom. Sweet options included Chocolate Dipped Strawberries, Cheesecake Brownie Bites, a Pineapple Delight dessert, a Strawberry Tart, Mickey Oreo Treats, cupcakes, ice cream, cookies, and the Ooey Gooey Toffee Cake served at Liberty Tree Tavern. They also had a cast member preparing a deconstructed s’more of sorts by melting marshmallows over a flame then dipping them in crushed graham crackers and chocolate. 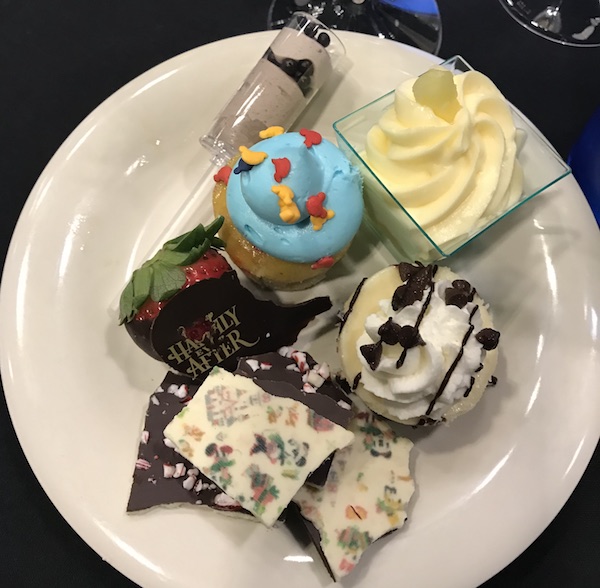 While I was there for the sweets, the Cheeseburger Spring Rolls lived up to the hype. It really tasted like a rolled-up McDonalds cheeseburger. It is made with pickles, so I can definitely see that being a turn-off for many of my pickle-hating friends, but I can see why the fusion has received such high praise. 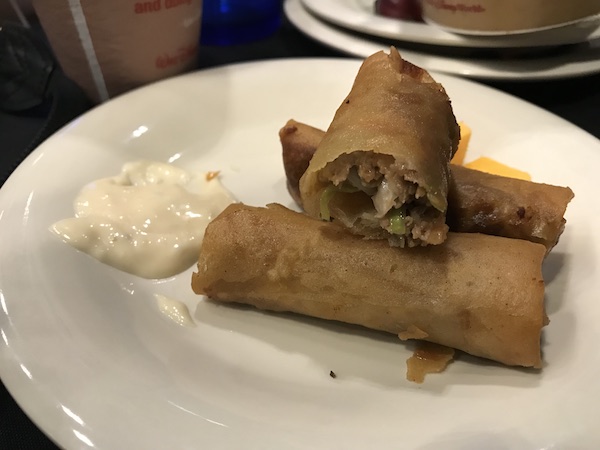 As for the sweet offerings, there were a few standouts. We all agreed that the Cheesecake Brownie Bites were probably the best of the mini desserts. We had high hopes for the Pineapple Delight, which just wound up being diced pineapple with a thick-whipped topping. I really enjoyed the create-your-own sundae station, but ice cream will always be a winner in my book. I actually asked the cast member to top the Ooey Gooey Toffee Cake with two scoops of ice cream, and she happily obliged. I’d go back just for the Ooey Gooey Toffee Cake alone — and may have to make a reservation for Liberty Tree Tavern next trip.

After multiple plates of dessert and grabbing a to-go cup of Joffrey’s Shakin Jamaican Cold Brew, we were escorted to the Plaza viewing area around 11:20 pm. It wasn’t too crowded. Many guests chose to sit down on the turf before the fireworks started. I took this opportunity to setup my tripod and camera.

In past years, I’d extend my 5-foot tripod on Main Street and anxiously watch as the masses walked down Main Street — clutching its legs and hoping that no one sent my camera flying. It never failed — ten minutes before the fireworks would start, a much-taller person would stand right in front of us, blocking my camera’s view of the castle. That wasn’t the case this year.

I was provided with plenty of space to set up my camera and didn’t have to worry about someone passing by and knocking into it. We happened to look over at a packed Main Street a few minutes before the fireworks began and all agreed: it was worth every penny. We were provided with a beautiful, clear view of the castle and all of the fireworks, and able to enjoy the full 360-degree experience that had been obstructed by the buildings on Main Street in past years. We actually got to see Tinkerbell fly from the castle, which we never got to witness from up close.

Dessert party or not, if you do happen to find yourself in Magic Kingdom on December 30th, I highly recommend watching from the castle hub. It’s a totally different experience than Main Street.

All in all, we were really satisfied with the dessert party and found it to be worth the price, despite what our new “friend” warned prior to it beginning. Ironically, the true value of the dessert party wasn’t the food. It was the peace of mind and not having to worry about staking out a spot, and being able to capture beautiful, unobstructed photos and memories. We were able to enjoy the park before the party started rather than worrying about finding a spot on Main Street and having to stand around for an hour or more. We had plenty of energy after the fireworks and were able to tackle all of our favorite attractions during the Extra Magic Hours, rather than being mentally and physically drained from battling the crowds. And, while the dessert offerings weren’t anything spectacular, they got the job done and there was enough variety to satisfy even the pickiest eater.

As with anything at Disney, deciding whether the dessert party is “worth it” is purely subjective. Given the time we were visiting and the stress we’ve endured in the past, we felt that it was totally worth $80 per person.