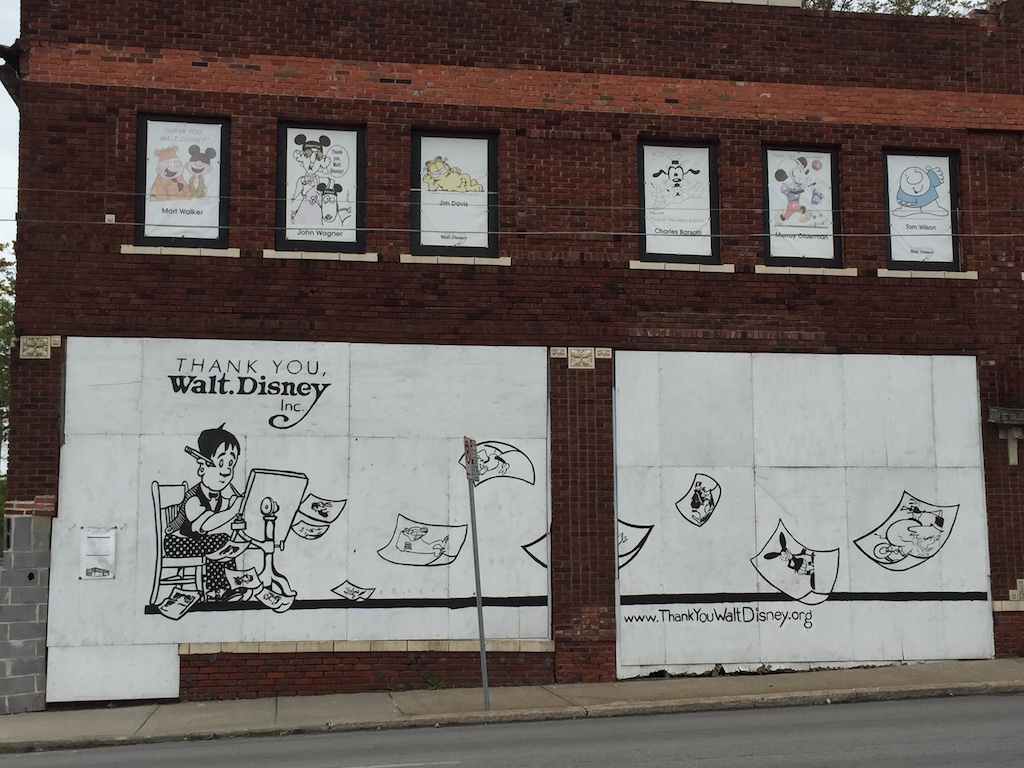 ShareTweetSubscribe
My husband and I recently had the chance to spend a weekend in Kansas City, Missouri without our kids. Our primary reason was to attend a Billy Joel concert, but since we had a little time to kill before heading home, we decided to visit a couple of landmarks important to the history of the Walt Disney Company and Walt Disney himself. Our first stop was the rather dilapidated home of Laugh-O-Gram Studio, located at 1127 East 31st St. in Kansas City. If it weren’t for the cartoons painted on the side, you would never know that you were driving by such a historic location. Laugh-O-Gram Studio was Walt’s animation studio from 1921 to 1922. Walt was hired to animate several cartoons in 1921, which became known by the name, “Newman’s Laugh-O-Grams.” Walt kept the name, calling his new studio Laugh-O-gram Films and together with Ub Iwerks and several other animators, completed the cartoons. Unfortunately, the company was broke, and Walt actually lived at the studio for a short time. They took a couple of other jobs, but ended up filing for bankruptcy in July of 1923. Walt left his studio and Kansas City and headed for Hollywood. This building is where Walt was actually inspired to create the character of Mickey Mouse. In an interview years later, Walt told a story of watching a mouse while working nights at his Kansas City studio:

“They used to fight for little pieces of cheese in my waste-basket when I worked alone late at night. I lifted them out and kept them in wire cages on my desk. I grew particularly fond of one brown house mouse. He was a timid little guy. By tapping him on the nose with my pencil, I trained him to run inside a black circle I drew on my drawing board. When I left Kansas to try my luck at Hollywood, I hated to leave him behind. So I carefully carried him to a backyard, making sure it was a nice neighborhood, and the tame little fellow scampered to freedom.” Though the building isn’t much to look at now, it was still really neat to see and to know the history that had taken place right where we were standing. There is actually a local non-profit group called “Thank You, Walt Disney” who is working to raise money for the building’s restoration. The exterior has been stabilized and restored. The next step is to complete the inside and open a museum of Disney memorabilia, a movie theater showing the Laugh-O-Gram cartoons and an education center revolving around animation. If you’re in Kansas City and have a little spare time, I recommend taking a drive past the building. It’s located on a quiet street and was easy to find with our GPS. It’s neat to know that there’s a piece of such important Disney history so close to our home. Next time, I’ll be sharing about our trip to Walt’s boyhood home in Marceline, Missouri. Marceline is just a short drive from Kansas City, so the two can easily be combined in a weekend trip. Stay tuned! Source material courtesy of Wikipedia and Thank You, Walt Disney Inc. Links to my two articles about our visit to Marceline: Main Street The Dreaming Tree and Walt's Barn
ShareTweetSubscribe