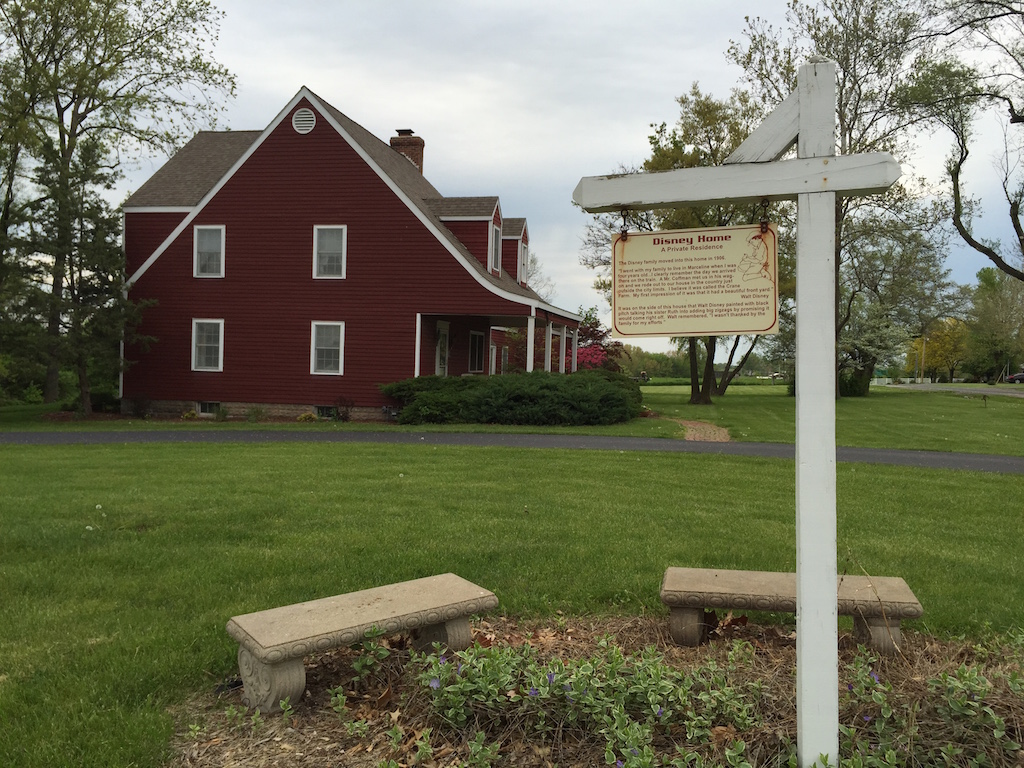 My husband and I recently had the chance to spend a weekend in Kansas City, Missouri without our kids. Our primary reason was to attend a Billy Joel concert, but since we had a little time to kill before heading home, we decided to visit a couple of landmarks important to the history of the Walt Disney Company and Walt Disney himself.

First, we were in Kansas City checking out the original site of Walt’s Laugh-O-Gram Studios. After that, we headed to Marceline, where Walt spent part of his childhood.  We took a stroll down Main Street, then we hopped back in the car and headed for Walt’s Dreaming Tree and Barn. This is easy to miss if you’re not looking for it. There’s a small sign on the side of the road and enough room for one car to park. We parked and took off down the path. Walt’s Dreaming Tree is located on that path. If you’re at a Dreaming Tree, you should take the opportunity to dream: My husband thought I did it wrong, so here’s his version of dreaming: *Edited to add – The Dreaming Tree has been battling disease and lightning strikes for years, which left it in the condition you see in the photos.  Since our visit, it was actually hit with a strong wind storm the last week of May 2015 and the tree was lost. العاب فلوس حقيقية A fence has been erected and plans are being made for how to refurbish the area. A little further down the path, you’ll step into a clearing and find the barn. There are signs along the path leading to the barn that explain the structure’s history and significance. Walt and his sister Ruth spent a lot of time playing here and it was so etched into Walt’s memory that he designed a replica for his backyard in California as an adult. 1xbet This is not the original barn, but a re-created version built by volunteers a few years ago. Visitors are welcome to sign their names on the walls (the whole ceiling was covered too – how did they get up there?!), so make sure to bring a pen or marker. Since we weren’t planning on this stop, all we had was a pen. You can see our names toward the upper right-hand corner of this beam. The barn and tree were neat to see, especially knowing that Walt lived here when he was younger and that the area made such an impression on him. Speaking of living, Walt’s boyhood home is actually on the corner, right before you get to the Dreaming Tree. It is currently a private residence, but there is a sign stating that this was Walt’s home. We were disappointed that we couldn’t go to the Walt Disney Hometown Museum because they’d already closed for the day. The grounds were beautiful and fitting with Walt’s love of trains, the museum is located right next to the train tracks that run through the center of town. While in Marceline, you can also check out Walt Disney Elementary (just a photo op, as this is the town’s actual school). The flagpole outside was actually donated to the school by Walt and was from the 1960 Winter Olympic games. It flies an official Disneyland flag and is the only place other than Disneyland that can boast this honor.

The other Disney highlight that we missed was Ripley Park, right in the middle of town. لعبة 21 Parked there are several train cars from the Santa Fe and Disneyland Railroad. Walt loved trains from a young age and was often said to have spent a lot of time watching the trains pass through town as a boy.

Since we didn’t get to tour the museum, I can’t really say if there’s enough to do in Marceline to plan a whole day here. It’s definitely worth a stop for an afternoon if you’re in the area, especially if you’re a Disney fan.

Even though the Disney family only made Marceline their home for 4 years, it’s obvious that the town made a lasting impression on a young boy named Walt.