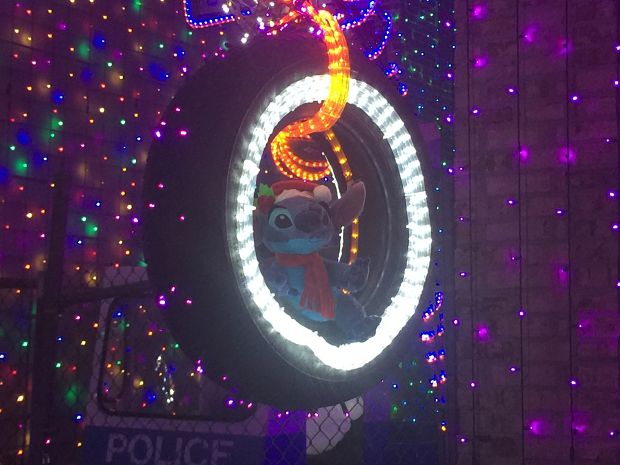 Walking into the event I saw the anticipation building by many of the guests and cast members. The Streets of America was buzzing before the lights even turned on. As I walked around I noticed that many of the little shops on Streets of America were filled with Christmas souvenirs. One of the more popular souvenirs was a special Osborne Family Spectacle of Dancing Lights shirt, which said “That’s A Wrap” which was a clever pun on the fact that the lights were wrapped around the building, and that it is sadly the last year of this event. The lights came on as two special guests were invited to flip on the light switch. Experiencing the lights turn on for the first time will take your breath away. In fact when the lights turned on for the first time I involuntarily gasped in awe of how spectacle the lights truly were. Looking around my jaw dropped. Even with the Florida heat and humidity the hairs on my arms were standing straight up. The Christmas music and the lights are synced up to make a display that is simply magical. Cast members and guests were dancing and singing along together in the streets, which made the whole event seem so sincere. On top of all of that there was also a flurry of “snow” blowing down onto the Streets of America. Although the flurry was simply soap bubbles it really did look like snow. For someone like me who grew up in upstate New York this snow effect made it really feel like it was officially the Christmas season. I can only imagine that for southerners who may have never seen, or rarely see, snow this effect is astonishing. Hidden in the lights were extra special touches like Tinker Bell, Stitch, and so much more. According to a cast member I spoke to, there are 90 hidden Mickeys this year in the lights. These fun touches make The Osborne Family Spectacle of Dancing Lights something you can spend a lot of time watching.

I typically like to find at least something I can be critical of because I like to hold the Disney parks to the highest standard, but honestly the only thing that was bad in my opinion was the heat and humidity, and that isn’t Disney’s fault.