The Indian custom of turning palaces and temples back over to nature for the good of Earth’s creatures is symbolized in the Maharajah Jungle Trek. In this walking tour, the hunting lodge and palace ruins serve as homes to the majestic tigers that have become the royal family of this habitat now. The rainforest-like surroundings are reminiscent of those found in Nepal, India, Thailand and Indonesia, and are home to other fascinating creatures. 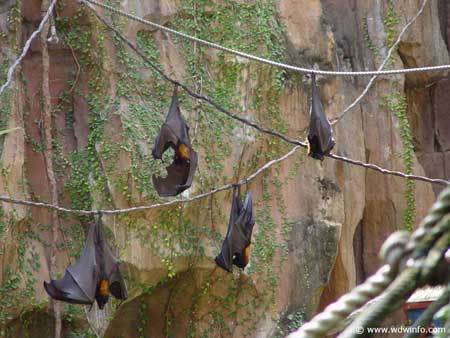 As your journey through the Royal Forest begins, be sure to stop at one of the stands near the entrance and pick up a brochure that describes the wildlife found here and  some viewing tips as well. Amidst the rocky pit area with a rushing waterfall, you can spot the world’s largest lizard, the Komodo Dragon. 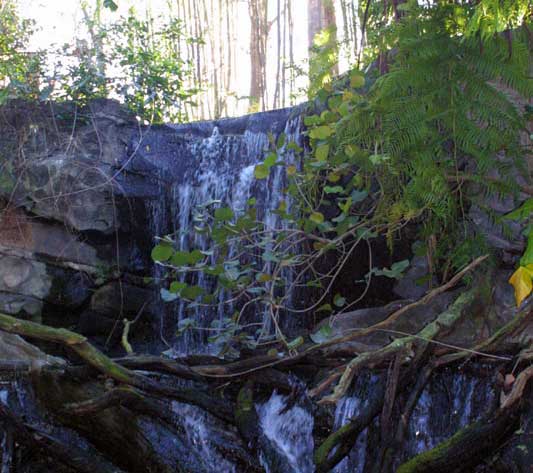 Three separate areas are provided for your viewing pleasure. Further along the path, the large black and white creature you’ll see that is a relative to both the horse and rhinoceros, is the Malayan Tapir. The brightly painted hut that resembles an Indonesian community hall serves as the viewing and educational resource hut of the Bat Cliffs. Here, you’ll find 32 bats of the Rodrigues Fruit and Malayan Flying Fox species. Guests may be surprised to find that some of the viewing areas are without glass panes or wire coverings. There is nothing to fear however, as some of these bats have a 6-foot wingspan and would not be able to enter the 14-inch window frame. Magnificent Asian Tigers can be seen from three separate viewing areas.

TIP: The Tigers are most active early in the mornings 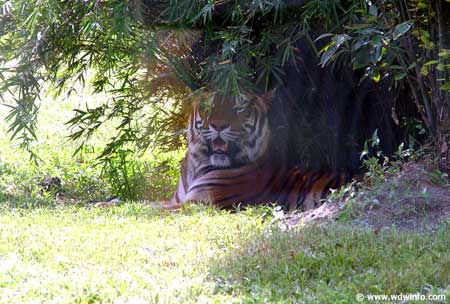 TIP: Don’t just stop at the first viewing platform. If it is crowded, move onto the second or third areas, the view may be better.

Visitors will marvel at the quiet strength of these stealthy creatures.Their playful nature can be seen as they play with the large ball in the water.

In the grazing area behind the tigers, you’ll find Blackbuck and Elds Deer. The inner walls of the viewing areas serve as murals that pay homage to the animals within. As you saunter further down the path, you’ll pass through a domed Mughal-style mausoleum known as the “Red Pavilion”. Amidst the great hall ruins on the other side, you’ll find exotic birds of Asian descent, some of who are tree dwellers, while others may be ground or mud dwellers. Relax on the marble benches and see Palawan peacock pheasants, white-rumped shamas, fruit doves, Indian rollers, masked plovers and large King Parrots, a few of the 50 species found here.

The wildlife may be the main attraction here, but be sure to take the time to appreciate the wondrous surroundings. As you stroll the paths through the crumbling ruins, enjoy the magnificent murals that grace the walls. These murals, some trimmed in gold, depict the legends of past royal hunts. While these are made to look old, look closely at the hunter with the turban. His earring is actually a Hidden Mickey! There are several Hidden Mickey's in the murals along the trail. Pass through the formal herb garden, where the warm scents of jasmine and honeysuckle assail your senses. See the bright flashes of cloth as the hanging pennants flap in the breeze. These represent the religious cultures of northern Asia and each is symbolic of prayers to the gods. There is also a tree hung with bells that represent the prayers that have been answered. The half-mile long path is lined with costumed Cast Members at the wildlife viewing areas to answer any questions you may have.