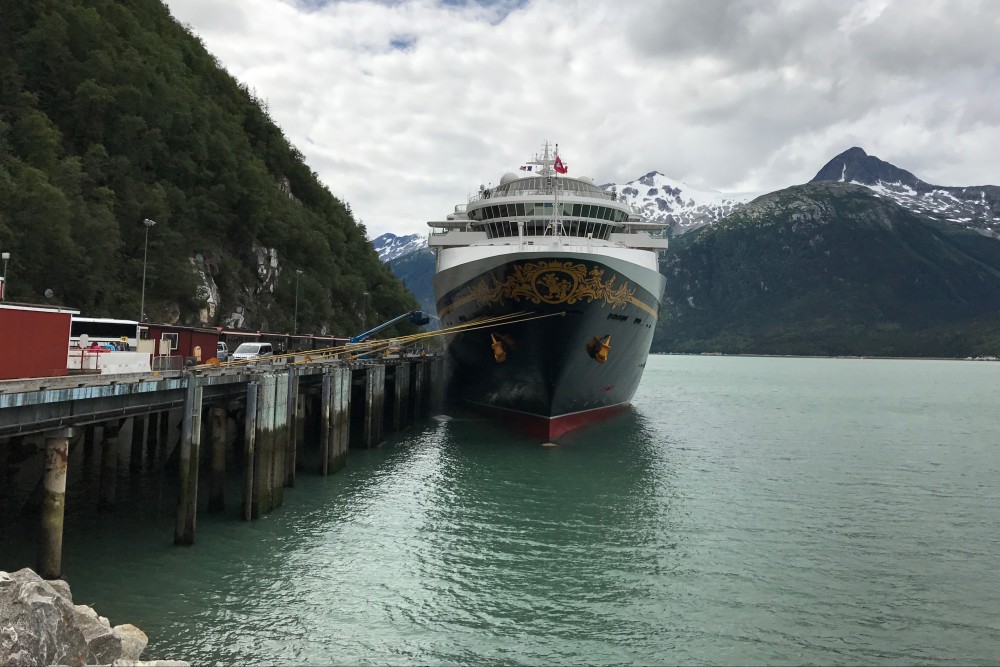 There’s something you should know before I even get started:

We’ve also been lucky enough to have cruised quite a few times since our first sailing on Disney Cruise Line in 2005.

So, it’s not surprising then that when we started planning our summer vacation, a cruise was at the top of the list. I was also going to be celebrating a big birthday that summer — 50…the big five zero — so it needed to be a special cruise.

Initially, we talked about doing back-to-back Caribbean cruises. How could two weeks on the Disney Fantasy be wrong?

Then, Disney Cruise Line did something crazy and announced a 9-night cruise to Alaska aboard the Disney Wonder, our favorite ship. We had already cruised to Alaska three times before, twice aboard the Wonder, so we already knew we loved the ports, and getting those plus two extra destinations (and two extra nights on the Wonder) was a bonus.

We booked as soon as we were allowed to.

By the time the cruise rolled around, we had convinced some family friends to join us on the cruise and made plans to meet up with several DIS-friends onboard the Wonder. For their cruises to Alaska, Disney Cruise Line departs from Vancouver, British Columbia, Canada. I won’t bore you with the details of how we got there, but let’s just say we love public transportation, and used pretty much all of it — planes, trains, buses, light rail…..not necessarily in that order. As you should when taking a cruise, we arrived in Vancouver the day before we set sail, staying at a hotel just a few blocks from Canada Place, where the Wonder would pick us up the next morning. We discovered it was a great location, as a Tim Horton’s was right across the street. The Disney Wonder, as always, was a beautiful ship and the great thing about leaving from Vancouver, as opposed to Seattle, is that you’re never sailing far from land, so the view is always beautiful.

After a relaxing day at sea, we arrived in Ketchikan, a port that always reminds me of a sleepy fishing village. We had a couple of big excursions planned later in the cruise, so we decided to do something a little more modest in this port. We had talked about doing the lumberjack show on previous cruises, but always decided on something else, so this time we figured that a cheesy lumberjack show would be the perfectly Alaskan way to start our cruise. 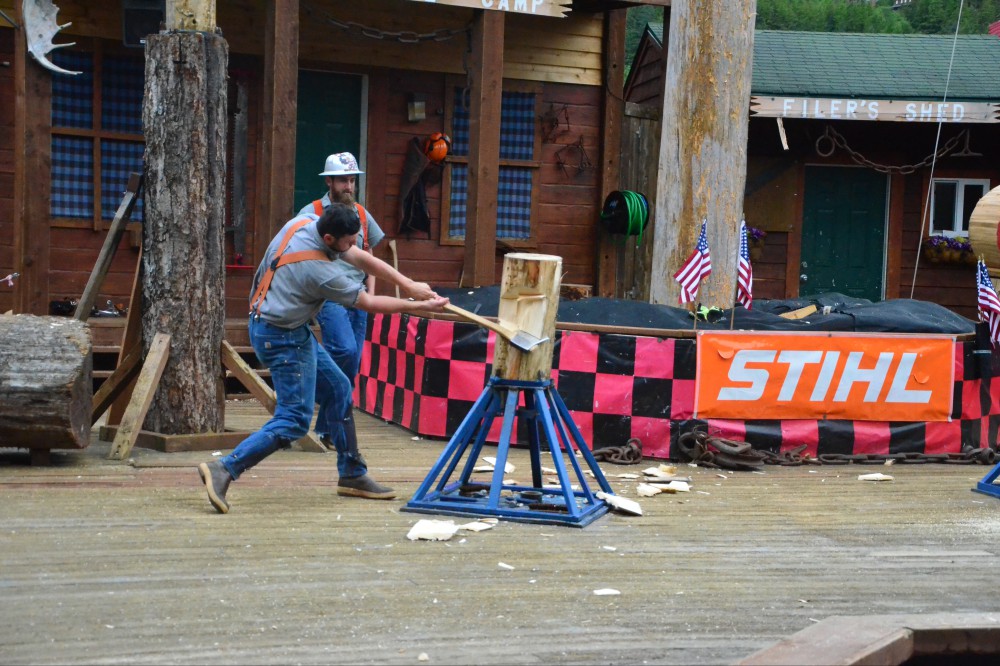 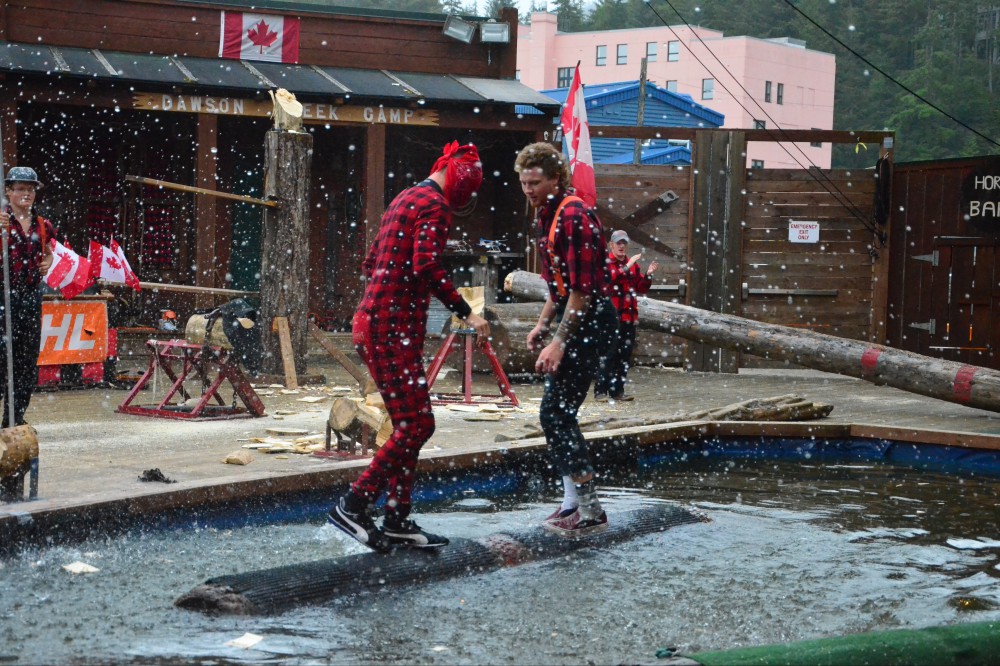 The venue is just a couple blocks from the port and there isn’t a bad seat. If you book the show through Disney, there’s even a special guest that welcomes you. The show moves quickly with chopping, sawing and log rolling as the American and Canadian teams battle for supremacy. The show also leaves plenty of time to enjoy the rest of the port.

Even if you don’t plan an excursion in Ketchikan, there are plenty of shopping and dining options within a short walk.

The next morning, we woke up at Icy Strait Point in Hoohah, Alaska, one of the ports that isn’t typically featured on the 7-night Alaska sailings. This was the port that our 13-year-old son was looking forward to, because it’s the home to one of the world’s largest ZipRider. The ZipRider is different from a normal zipline in that you have a seat underneath you. During the 90 second ride, you travel over a mile and drop 1330 feet, reaching speeds of 60 miles per hour. The excursion was at the top of our budget, but totally worth it.

Unfortunately, before the excitement you have to take a 30-minute scenic bus ride through the village of Hoonah, and up the winding roads to the top of 1550-foot Hoonah Mountain.

That bus ride was the only thing keeping us from pulling out the credit card and jumping back on the ZipRider. It was so much fun!

Icy Strait Point is a private port owned by natives of Hoonah and is only open when being visited by cruise ships. While there is some shopping and restaurants, the selection (and pricing) is not what you’ll find at the other Alaska ports. This is a port where excursions are the focus.

The glacier is 6 miles wide and we were so close that it was impossible to get the whole thing in one picture, so enjoy this panoramic shot. The Hubbard Glacier is 76 miles long from its origin point, and is one of the few glaciers that is still advancing.

While we were there, it put on quite a show for us, with calving (or pieces of the glacier breaking off) happening quite often. In a bit of great planning (by me), we booked a brunch at Palo the morning of our visit to Hubbard Glacier and the ship was in the perfect position as we dined. I’m sure my wife will agree that the visit to Hubbard Glacier was the highlight of the trip…though she really wants to hit the ZipRider again.

For our stop in Juneau, the capital of Alaska, we decided to bust the budget again and booked a ride on a seaplane. While we were a bit apprehensive about taking off and landing in water, the view from the air made it totally worth it. There are plenty of shopping and dining options in Juneau, but keep in mind that they are all a (free) bus ride from the port. While it’s possible to walk, I wouldn’t recommend it.

Our final port was Skagway, which has the look of an old-west mining town. One of the more popular excursions in Skagway is the train which takes you up into Canada. A beautiful journey, but we’ve done it before and after subsidizing the economies of Icy Strait Point and Juneau, we decided to forgo an excursion here.

Unfortunately, because the schedule was different for the 9-night cruise, we were there on a weekend, when cruise ships don’t normally visit. Many of the shops in town were closed, but we still enjoyed ourselves walking around and getting in one last chance to shop in Alaska. 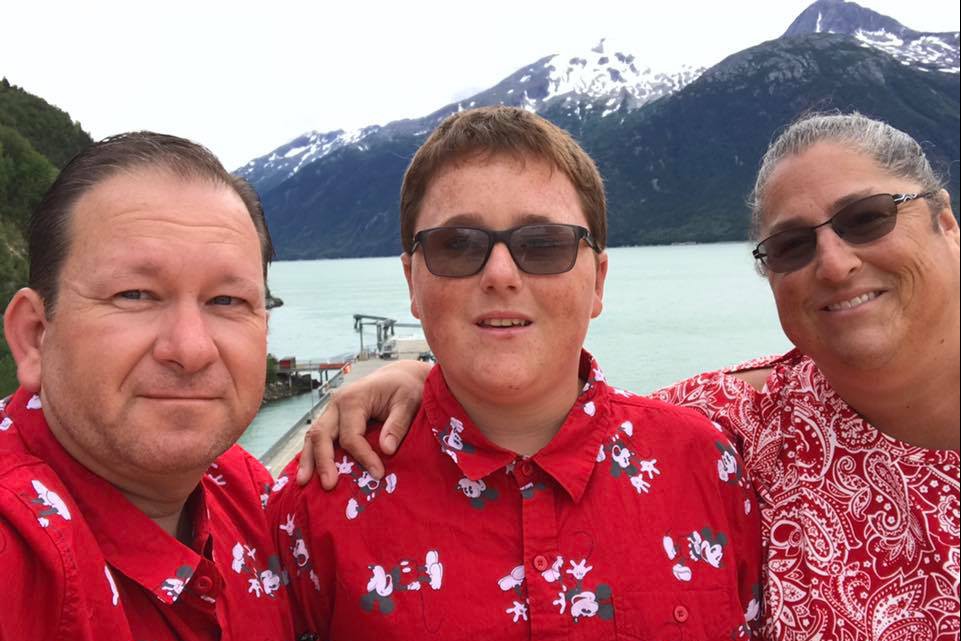 The next day, we were scheduled to visit the Tracy Arm Fjord. Unfortunately, conditions didn’t allow the Wonder to navigate the fjord, so the ship visited the Endicott Fjord to get a look at the Dawes Glacier. The ship arrived VERY early at the glacier, and was in the process of turning around to leave before we even realized we weren’t in Tracy Arm. [EDIT: As of 2019, Disney Cruise Line no longer visits Tracy Arm Fjord, replacing it on the itinerary with a trip down the Endicott Fjord.]

After the majesty of the Hubbard Glacier earlier in the cruise, we were perfectly fine with oversleeping.

We enjoyed the rest of the day, plus one last day at sea, before heading back to Vancouver and that sad last breakfast aboard the Disney Wonder.

My wife calls us “cruise snobs,” because we’ve been spoiled by taking several 7-night cruises, so a 3 or 4 night just doesn’t satisfy us. I have to say that this 9-night cruise was the perfect length.

I don’t know what it was about those two extra days, but it made all the difference. We got to the point in the cruise when it would normally be half over, and realized that we were just getting started. Besides the great friends we cruised with and others we met aboard the Wonder, the highlight of this cruise was those two extra destinations — the exhilarating ZipRider at Icy Strait Point and the beauty of the Hubbard Glacier.

For us, cruising in Alaska is unlike any other cruises we’ve done. The word I usually use to describe it is: relaxing. There is plenty of time to just sit on deck and take in the wonder (pun intended) of the nature that surrounds you. Request a no-obligation quote from our partners at Dreams Unlimited Travel!