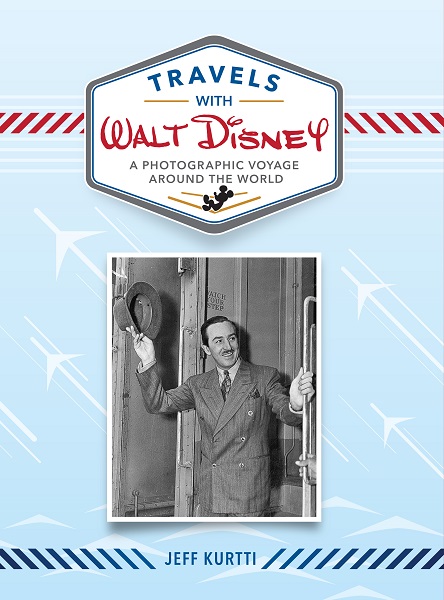 One of the things that made Walt Disney a creative genius was his sense of adventure, wonder, and curiosity. Whether it was growing up in Marceline, Missouri, traveling through South America, or touring through Europe with his family, Walt was a passionate traveler.

There have been numerous photographs documenting virtually every aspect of Walt’s life, but a new book by Jeff Kurtti, Travels with Walt Disney: A Photographic Voyage Around the World, reveals seldom-and never-before-seen photographs, as well as familiar ones, documenting many important aspects in Walt’s life. The book, which will be released on April 3, 2018, is more of a travel journal or a scrapbook, rather than a chronological telling of Walt’s Adventures.

Fans of Walt Disney will love every page of this book especially the chapter entitled Taking Wing. “As air travel became more common, Walt certainly took advantage of its convenience and speed for business and personal travel.” Up until recently, guests at Disney Hollywood Studios in Florida were able to see the plane that Walt used to survey the land for his “Florida Project.” Kurtti talks about that plane, a G-I Grumman Gulfstream I, as well as the fleet of previous company planes and includes photographs of all the planes. Additionally, in Taking Wing, are images of Walt and Lillian in the planes and the official company logo used on the fleet.

The final chapter covers Walt and Disneyland. It’s a fitting end in illustrating a well-traveled life. Walt traveled the world and in the end, he created a place where people from around the world wanted to come to.

I loved this book on all levels. It is beautifully written and designed and Kurtti manages to present a new look at Walt’s familiar and well-documented life and career. In addition to photographs of Walt and his family, Kurtti also includes amazing images of never-before-seen artifacts, such as Walt’s passport from 1918, his documentation from his 1935 return trip aboard the Italian luxury liner REX, the note Walt famously forged to join the Army, and many more. Appropriately, Kurtti chooses an image of Walt’s last passport for the last page of the book.