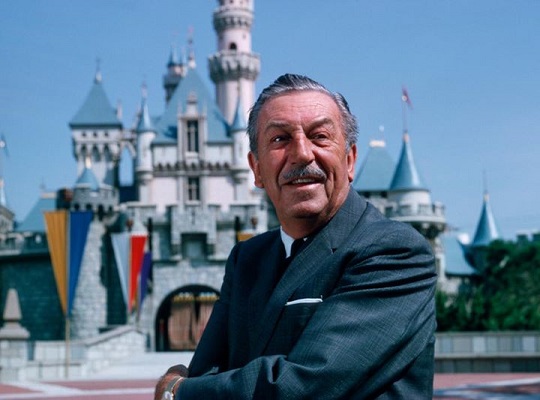 ShareTweetSubscribe
I have many friends who have frequently visited Walt Disney World, but have not had the good fortune to visit Walt Disney's original Magic Kingdom - Disneyland. I always look forward to taking them on their first visit to Disneyland and sharing the stories of the buildings, realms, attractions and people who made Disneyland a reality. At the end of their first day at Disneyland, I will ask, "So, what do you think of our little Park?" Almost without exception, they gush about Disneyland's charm, lushness, detail, cheerful cast members, and that they can "feel Walt's spirit" in the Park. And that is the most important difference between Disneyland and all other Disney theme parks, that awareness always on the edge of your consciousness that Walt's spirit, cheerfulness, innovation and positive attitude permeates Disneyland. Walt Disney relaxing in his Happiest Place on Earth. My generation grew up watching "Uncle Walt" mesmerize us each week on television with tales from the four realms of Disneyland - Adventureland, Frontierland, Tomorrowland, and the realm where Walt Disney seemed most at home to us, Fantasyland. Along the way he dazzled us with behind-the-scenes glimpses into how he and his artists and Imagineers created worlds of magic in films and at Disneyland where guests became part of the story. Big and little Mouseketeers who came after Walt Disney's passing will sometimes tell me how they wish they could have that experience of connecting with Walt. But you know, with a little faith, trust, pixie dust and knowing where to look, you can connect with Walt at some very special places in Disneyland. So, think happy thoughts and let's go to some of those places together. Walt Disney introducing Disneyland to his television audience. Walt Disney loved trains from the time he was a little boy in Marceline, Missouri until the last day of his life. It has been said Walt built Disneyland so he'd have a place to put his trains. From Walt's first inception of a little Mickey Mouse Park across from the Burbank Studio to Disneyland, a train circling the Park was always part of the plans. So, after you leave the world of reality and pass through the tunnel to the world of fantasy, walk to the front of the Fire Station and turn around to look at the Disneyland Railroad Main Street Station. Imagine Walt Disney standing there looking at the guests streaming into his Park on July 17, 1955, as the train chugs into the station, a tear of happiness running down his cheek because his dream has come true. That's exactly what Walt did on opening day as he looked out the window of his personal apartment immediately above the Fire House. Oh, and Walt loved fire engines, too. So, take a moment and just soak it all in. Then go on a Grand Circle Tour on the Disneyland Railroad and imagine how happy Walt was every time he drove the trains.

Walt Disney - Railroad Engineer. When you return to Main Street's Town Square, head over the the Main Street Opera House and take in The Disneyland Story Featuring Great Moments with Mr. Lincoln. Did you know as a boy Walt Disney so admired our 16th President he dressed up in a homemade costume to portray Mr. Lincoln in a school production? The ground-breaking technology of the Abraham Lincoln audio-animatronic figure that wowed audiences at the 1964-65 New York World's Fair made all our beloved attractions like Pirates of the Caribbean and the Haunted Mansion possible. So, enjoy a quiet moment with Mr. Lincoln, and feel Walt sitting next to you so proud of what he and his Imagineers made possible. Walt Disney meets Abraham Lincoln. Now stroll down Main Street, U.S.A. and listen to the background music whilst listening for music from films Walt produced, like Summer Magic and The Happiest Millionaire. As you look around at the buildings that brought back memories of his boyhood home of Marceline, Missouri for Walt, see if you can find a place to sit across the street from the Gibson Girl Ice Cream Parlour, once the Sunkist Citrus House. Now take your imagination back in time to shortly after Disneyland's opening day. It's early morning, all is quiet in Walt's beloved Park. A few maintenance workers are putting the finishing touches on Main Street getting it ready for the day's guests. Do you see that figure in a bathrobe shuffling down Main Street with a ring of keys in his hands? Yes, it's who you think it is. Walt Disney opening up the Sunkist Citrus House to start his morning by making some fresh orange juice. Walt was a common site on Main Street in the mornings. If Walt saw some workers on Main Street, he'd invite them in to the Citrus House, make them some fresh orange juice and ask them about their jobs, ideas for improvements, and their thoughts about Disneyland. Walt would listen to them very seriously and thoughtfully and take action on good suggestions. Walt Disney inspects the trolley tracks. Walt Disney honoured his father, Elias, with a window on Main Street, U.S.A. above the Emporium. The inscription reads "Contractor" as a reference to when Elias and Flora Disney, Walt's parents, designed and constructed houses in Chicago. Walt is commemorated next to the Main Street Cinema. Look for the door of the Disneyland Casting Agency - Open Since '55 - "It takes People to Make the Dream a Reality" - Walter Elias Disney, Founder & Director Emeritus. Now continue down Main Street and see if you feel Walt's presence at your side with his hands in his pockets and a big grin on his face at the sight of all the happy people in his Park. Walt Disney standing in his box watching The Golden Horseshoe Revue on his 30th wedding anniversary. Stepping out of The Golden Horseshoe Saloon, hike over towards the Rivers of America. Notice that petrified tree in the middle of the path? Would you believe that is one of the world's largest wedding anniversary gifts? As the story goes, Walt was traveling and came upon a petrified forest. He purchased a petrified tree and had it shipped to Lillian as an anniversary gift. Lillian, saying it was too large to put on her fireplace mantel, graciously donated it to Disneyland. That petrified tree represents the playfulness Walt and Lillian had with each other throughout their marriage. Decades after his passing, Lillian would remark on how much she missed Walt. Walt and Lillian Disney in Frontierland showing off Lillian's anniversary gift from Walt. Now wend your way over to New Orleans Square, the first new land to be added to Disneyland after its opening. Stand near Pirates of the Caribbean, the last attraction Walt conceived of and built, and look at the floor above. With its beautiful wrought-iron balcony railing. By the mid-1960s Walt's family had outgrown the tiny apartment above the Town Square Fire House. The rooms above the Pirates of the Caribbean were to be the family apartment for Walt and Roy Disney's families when staying in the Park. Sadly, Walt passed away before the apartment was completed and the family chose not to use it. Over the years the apartment has had many uses, including offices, The Disney Gallery and the Disney Dream Suite. The Disney family apartment interior was designed by artist and Imagineer Dorothea Redmond. You can see a sample of Ms. Redmond's artistry in the floral-painted mirrors of Mme. Antoinette's Parfumerie. You can also find evidence of the Disney family apartment in the detailing of the wrought-iron balcony. Look carefully, and you'll see the gold initials WD and RD, for Walt Disney and Roy Disney, weaved in the ironwork. Walt and Roy's initials in the balcony of their New Orleans Square family apartment. Now head over to Fantasyland, the land where it all started for Walt with a Mouse and with a Princess named Snow White. Standing on the drawbridge of the castle, look down at Main Street with Walt at your side and ask him, "Well, Walt, what do you think of all this?" He might just say, "That's swell, but we're just getting started." Walt Disney walking through Disneyland the day before the Park officially opened. Saunter over to Mickey's Toontown and look for Walt's second window with the inscription Laugh-O-Gram Films, Inc. W.E. Disney Directing Animator, a reference to Walt Disney and Ub Iwerks first film partnership in Kansas City. Doesn't it seem appropriate for Walt to have a window in the town built for the characters he created? Walt Disney's Laugh-O-Gram Window in Mickey's Toontown. After spending the day enjoying Walt's Park and all the magic it holds, walk over to Princess Fantasy Fair. Not long ago, this was the Carnation Plaza Gardens. On warm summer weekends, couples would dance to the sounds of swing by some of the biggest bands of the swing era. Walt would often end his evenings at Disneyland dancing with Lillian at the Carnation Plaza Gardens before watching the fireworks and walking hand-in-hand up Main Street, the lights on the buildings as bright as their smiles, to their cozy apartment. It may be time to head up Main Street ourselves.

Walt and Lillian cutting a rug at the Carnation Plaza Gardens. There are two more very important things we must do to connect with Walt before leaving Disneyland. Mickey Mouse is frequently in Town Square at the end of the day, and we must greet Mickey. Why? Because Mickey Mouse, so full of energy, youthful exuberance, inquisitiveness and a touch of mischievousness, is the heart of Walt Disney. Roy Disney so closely associated Mickey Mouse with his younger brother, at the dedication of Walt Disney World, Roy insisted Mickey Mouse be at his side because Mickey was the closest person they had to Walt himself. Hug Mickey, and you're hugging Walt. Walt and Mickey in their last photo together. Finally, let's go back to where we began at the Fire House on Town Square. Look up at that little window with the glowing lamp. When Walt was visiting the Park, he would turn on the lamp in the window. Word quickly spread amongst cast members that Walt was in the Park. After his passing, a cast member turned on the lamp in Walt's memory. It has been left on ever since to signal the core belief of all who love Disneyland that Walt's spirit continues to live on in his Park. It is a tradition for some guests to walk up to the window and say, "Thank you, Walt," before leaving the Park for the day. The glowing lamp representing the spirit of Walt Disney from inside Walt's apartment. We can keep the spirit of Walt in ourselves after we leave the Park by keeping in mind the values Walt held dear - commitment to family, friends and country. The spirit of Walt that glows in the little window above the Fire House can glow within us.