Disneyland, California: Now and Then 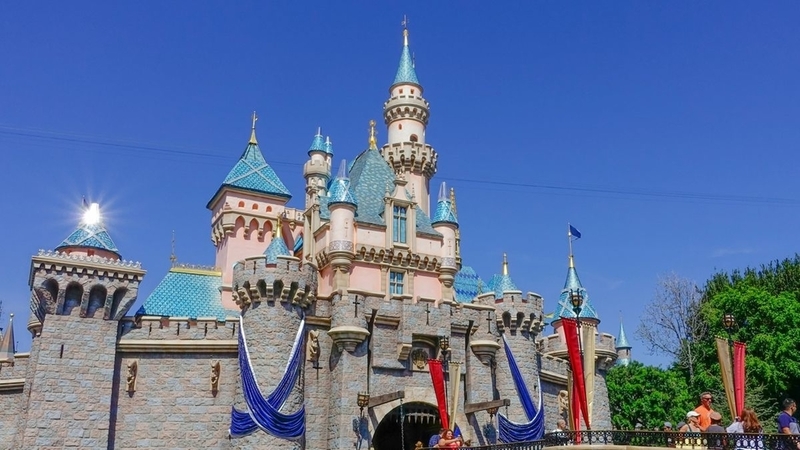 A lot of my time in Disney parks has been spent with my sister, Casey. It all began when I was six, and she was eight, our first trip to the Happiest Place on Earth with no idea what to expect. Back then, there was no internet or YouTube to get a feel for the place, no vacation planning DVDs, or accessible reviews. Coming from Australia, you were lucky if the front page of the brochure your travel agent gave you had a picture on it. If it did, you cherished it and fought over it with your siblings.

We had no idea what we were walking into and even less of a clue about the obsession that would ensue and inevitably bring me all the way here 28 years later.

I think about the progression of time, how you can’t stop it and you can’t go back, only forward. I remember the rides that Casey and I rode as children, elated that such a place existed and then returning over and over again in the subsequent years, never able to get enough of a place that was so uncomplicated and enjoyable.

The photo below is of the two of us on Thunder Mountain Railroad in Disneyland, California. I on the right (8) and Casey on the left (10), dressed in our famous hand-made matching outfits with our hands fixed to the railing and never in the air as we were told. A practice that didn’t last long after this photo when I took my place as the family rebel with my hands in the air – and I just didn’t care. 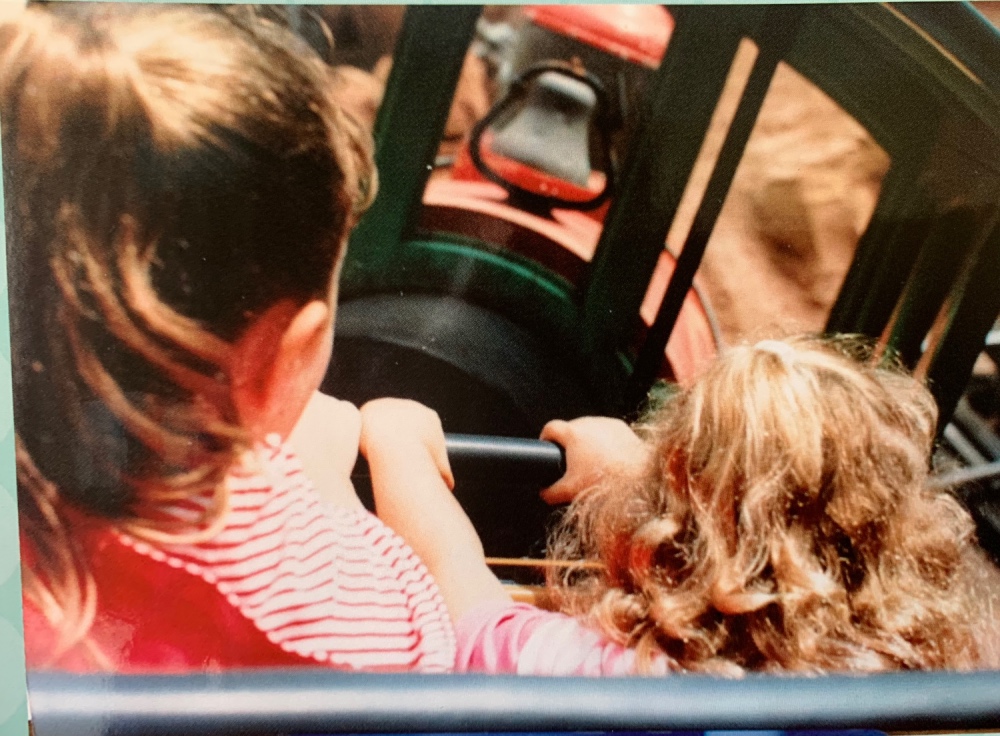 The next photo is of my own children, my son (8) on the left and my daughter (11) on the right also on Big Thunder Mountain Railroad in Disneyland. They are dressed in semi-matching store-bought attire with their hands in the air just like their mother. 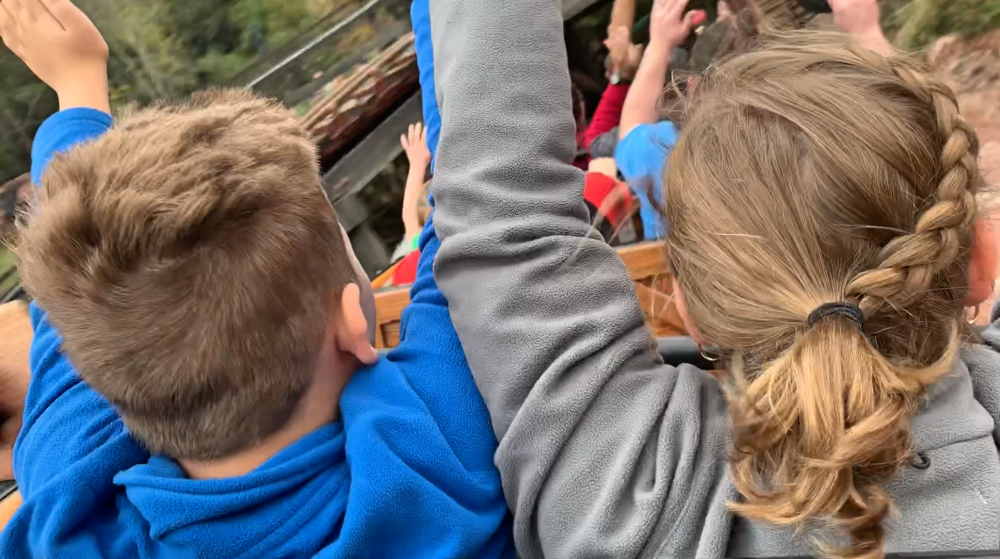 I’ve written to you all many times about the importance of traveling with family and how the Disney experience can be one that helps shape your children’s lives for the better, even in ways you never imagine. For example, it was only recently when my daughter was flicking through one of my old photo albums that I stumbled upon almost the same photos of my sister and me as those I have recently been taking of my own children. I was reminded of how the changes in our lives have been unable to break this tradition we hold so dear, even all these years later.

When we were kids, things were different. We didn’t have FastPasses or Downtown Disney; California Adventure was still serving as the Disneyland carpark. But there is one thing that the Happiest Place on Earth was never without, that feeling you get when you walk through the front gates, choosing left or right under the railway bridge and straight down Main Street U.S.A to select your first adventure. It is that moment where you truly feel like anything is possible.

Over the years, the essesnce of a Disneyland vacation began to change outside the parks as well. Before 2001, park-goers didn’t spend quite as much time dining in the theme park. Options were limited, and instead, many found more affordable choices dotted in between the surrounding hotels of South Harbour Boulevard. If you frequented Disneyland in the ’80s, ’90s, or even into the 2000s, you might recall a little restaurant called Millie’s that stood proudly at the entrance to the Fairfield Inn. Ah, the feels. 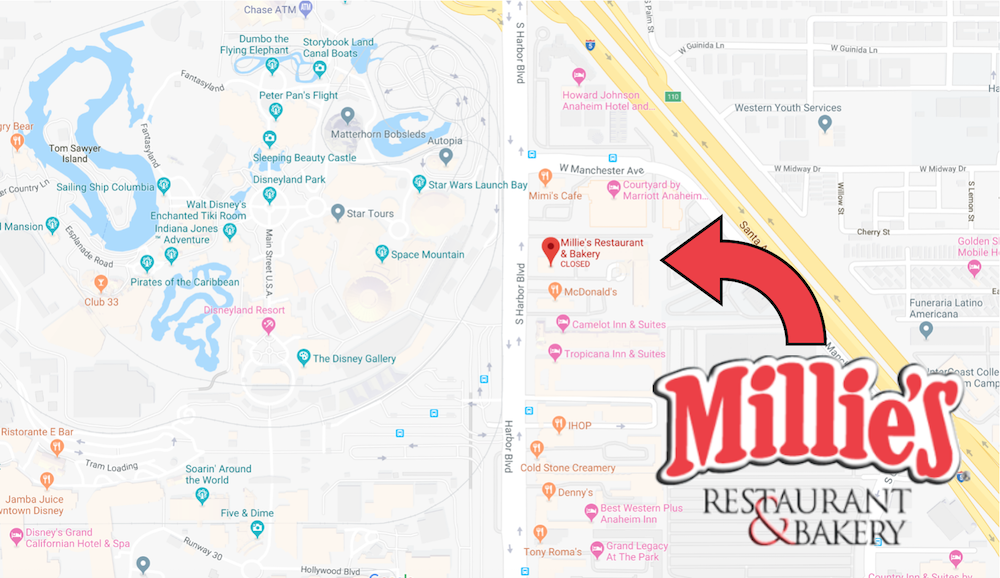 Millie’s is where many of my earliest Disney memories were made. I can vividly recall that feeling of being able to finally sit down after a full day of Disney, a kids menu in my hand, a peg game on the table ready to be fought over; those were the days. The Peg Game (The Original IQ Tester) was so popular in my family that one year my parents purchased a few of them and brought them back with us quickly became a Sunday morning tradition.

Known for its significant portions, low prices and prime position between the popular accommodation of the time, Millie’s became an institution alongside the Disneyland Park. It was the perfect companion, able to level out the expense of a trip to Disneyland with family-friendly value for money. 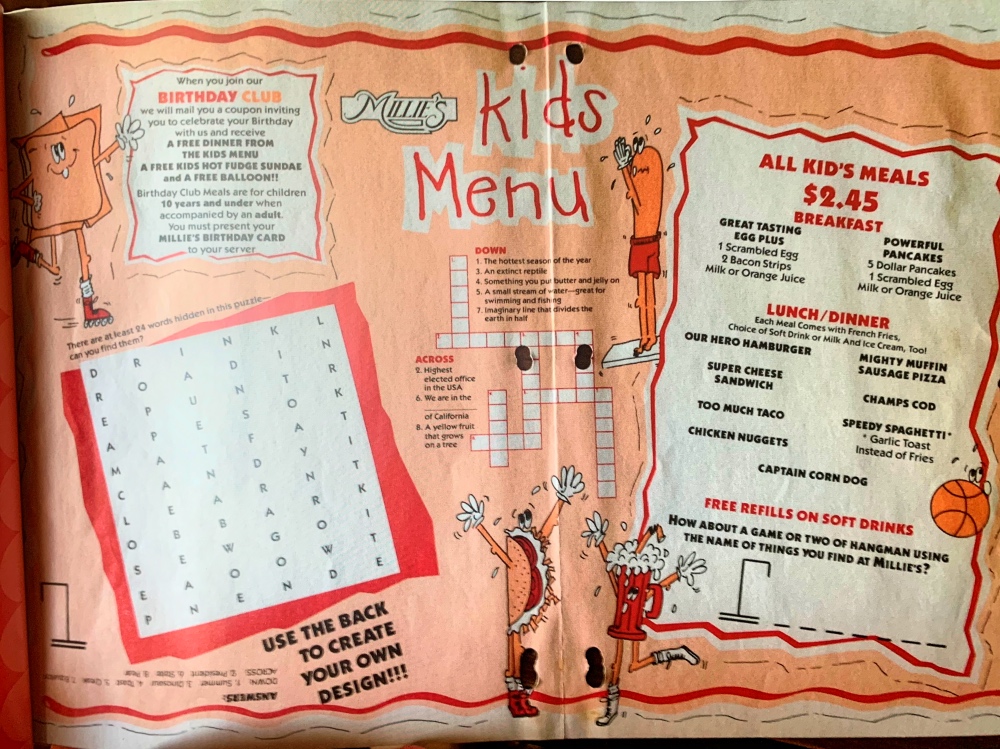 Over the years the kids’ menu changed a few times, an extremely exciting event when you have been dreaming about Millie’s from your little Australian bed for the entire year since you had last been. Equal parts because it was the only time we really went out for meals and because being at Millie’s meant the unmistakable truth that you had the rides of Disneyland in your immediate future. 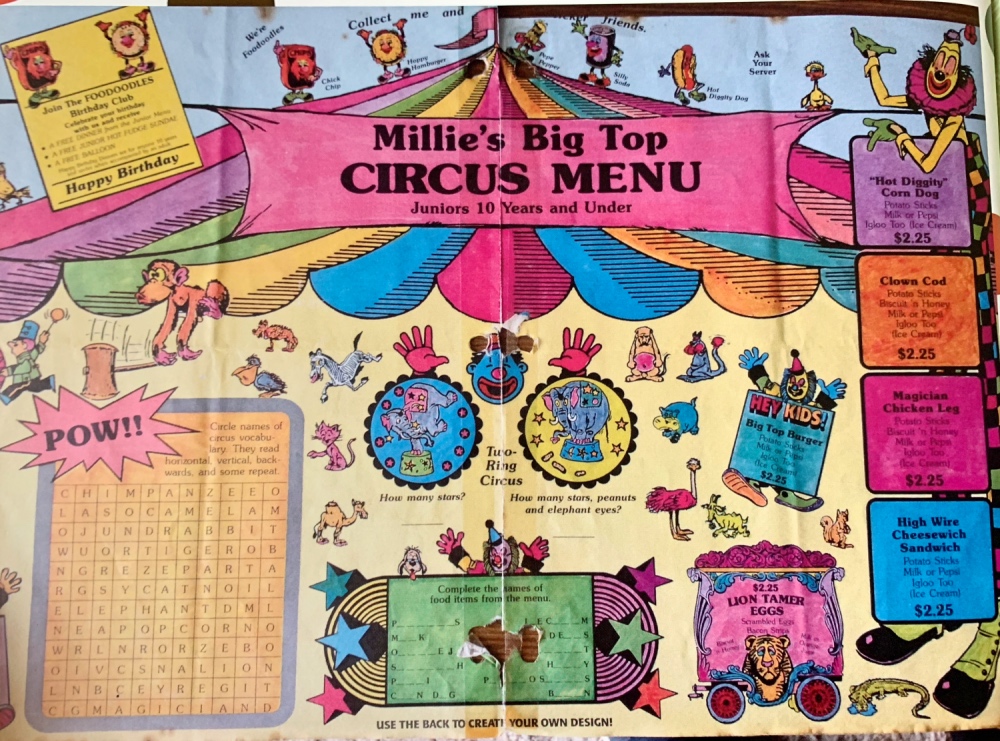 As soon as you entered through the front door, Millie’s had your back; continuing the theme of Disney throughout the entire restaurant. With an impressive collection of plush characters, both as decoration and some for sale, choosing to end your day with dinner here made you feel like you had never left the park at all, reminded only by the $2.25 kids meals. The affordable, potentially not entirely authentic, Disney merchandise was able to keep kids busy when you occasionally had to wait for a table. Truth be told, many Disney Pen sets purchased for best-friends back home in the waiting area of this very diner. 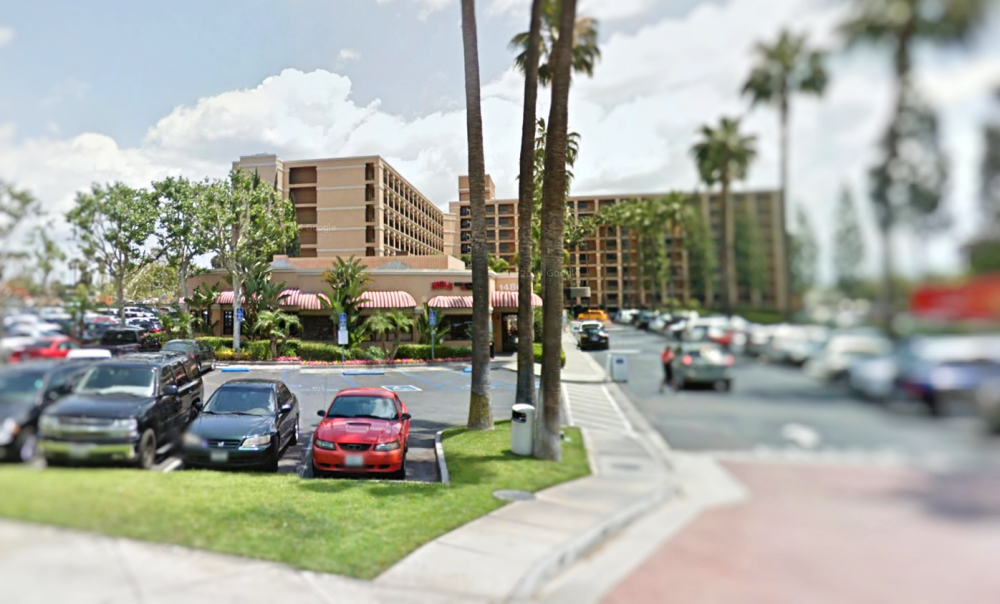 Millie’s Restaurant and Cafe was one of two locations with the Van Nuys restaurant still opening its doors to fans every day. For those of us Disney tourists though, we still feel the hole in our hearts left by the 2014 closing of the landmark and subsequent demolition in 2015.  It was a sad sight for Disney-loving families as they would come back to their favorite vacation destination from all over the world, only to find that their beloved breakfast or dinner tradition had been yanked from their reach.

Look, I have feelings about it, ok? 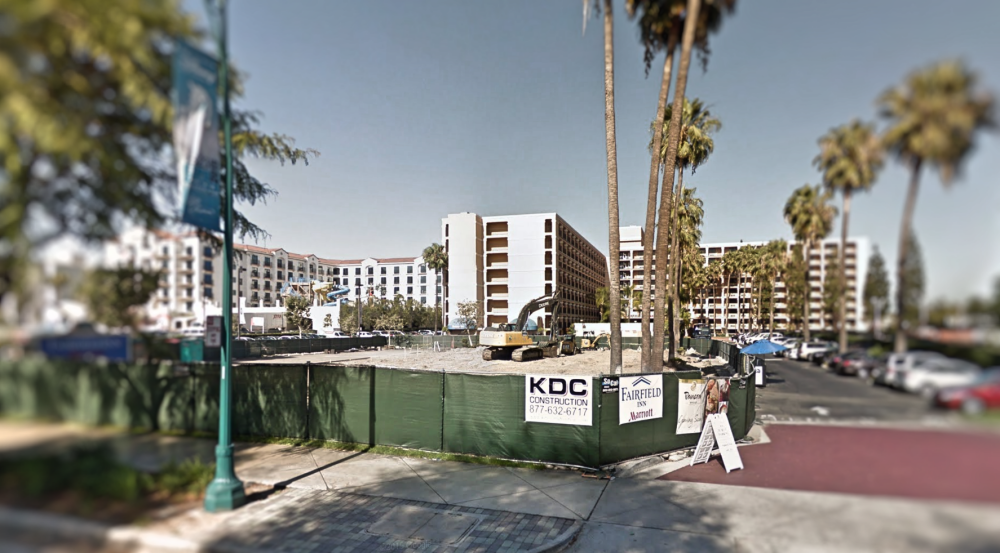 Even worse than the empty site where Millie’s and its dark red vinyl booths once hosted our conversations recapping the excitement of the day, was in 2016 when a new dining location opened up. Panera Bread.

Dear P.B, It’s not that I have anything personally against you however between the fact that I have an intolerance to gluten and the location of this store, I can’t help but feel a bit of resentment. Even though you are not directly responsible for tearing down my happy-place, the mere sight of you is a constant reminder of what was, and what should still be, the happiest diner next to the happiest place on earth. One day I will break through the emotional barriers between us; however, until then, I just need some space. Until I can pass you by without a pronounced disdain for the progression of urban development in the wake of losing our favorite after-hours Disney hangout, I shall avert my eyes. I wish you well and hope one day we can meet under better circumstances. 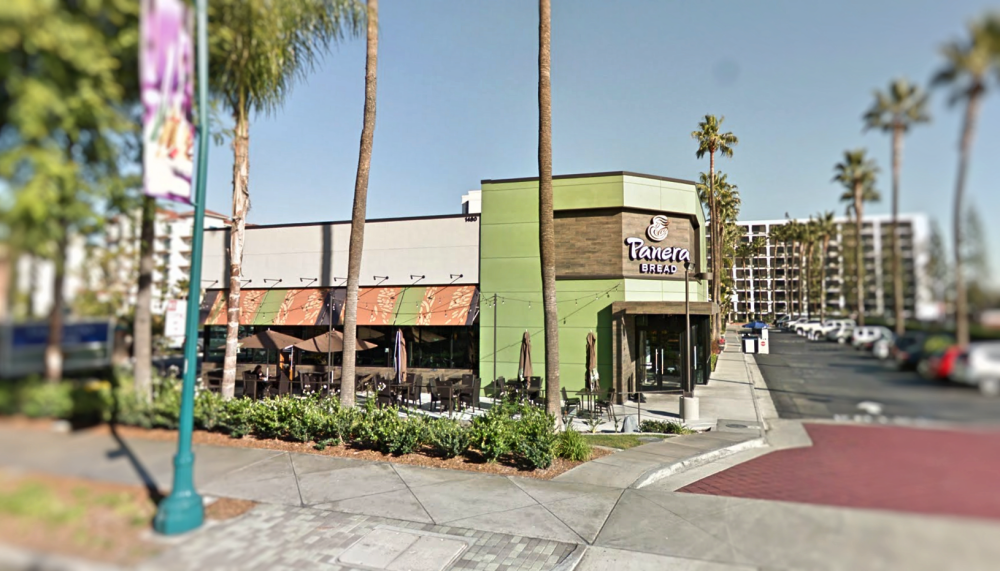 Moving back into the parks, a quick comparison between old and new maps show a whole new world of detail that has been added to both parks in California. Starting with California Adventure, the maps below show the differences between its opening in 2001 and the current 2019 edition. While some areas have been re-themed such as Paradise Pier morphing into Pixar Pier, other areas have developed on new land like Cars Land; some have even come and gone in between the two examples below, ahem, A Bug’s Land, we’re looking at you. 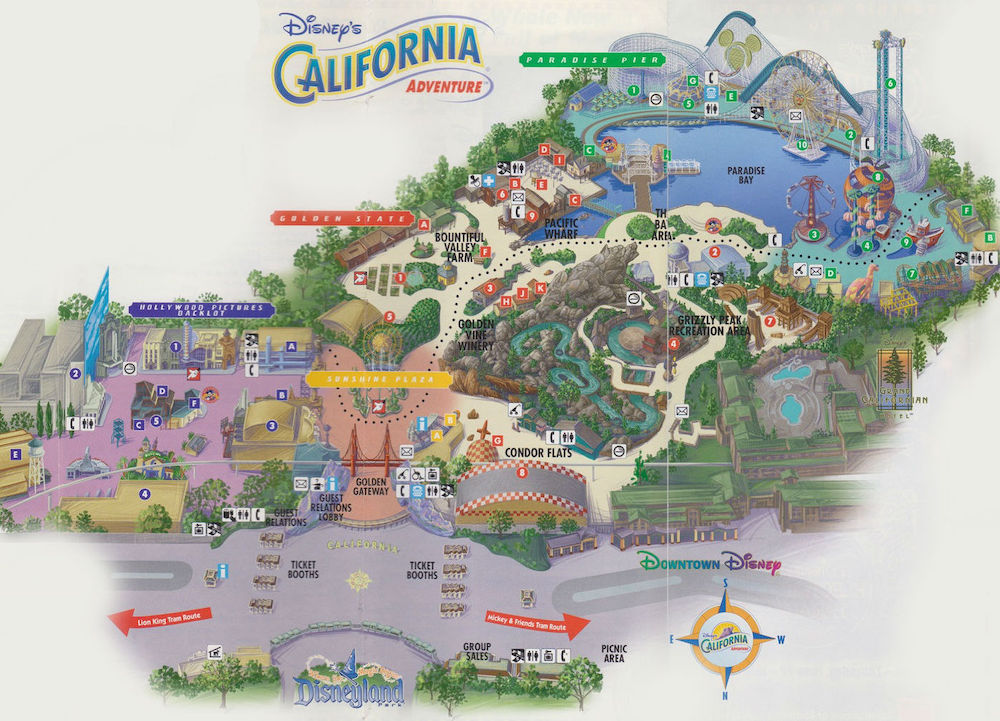 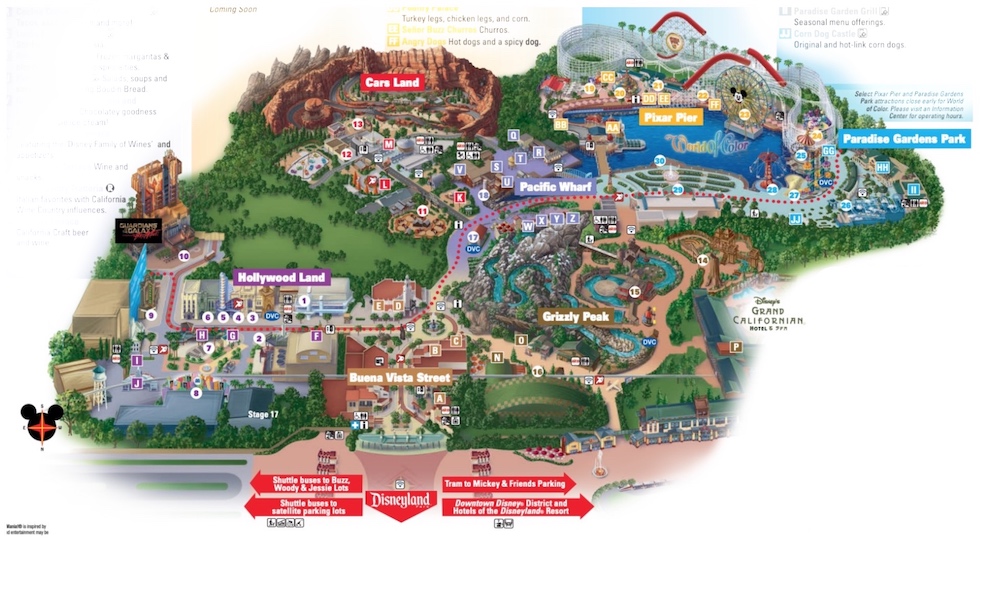 While the overall focus of the California Adventure theme park has shifted away from its nod to local Californian landmarks and toward more character-based theming, Disneyland, on the other hand, has continued its timeless Disney design. The image below shows the park before the Critter Country and ToonTown expansions in the 1990s. 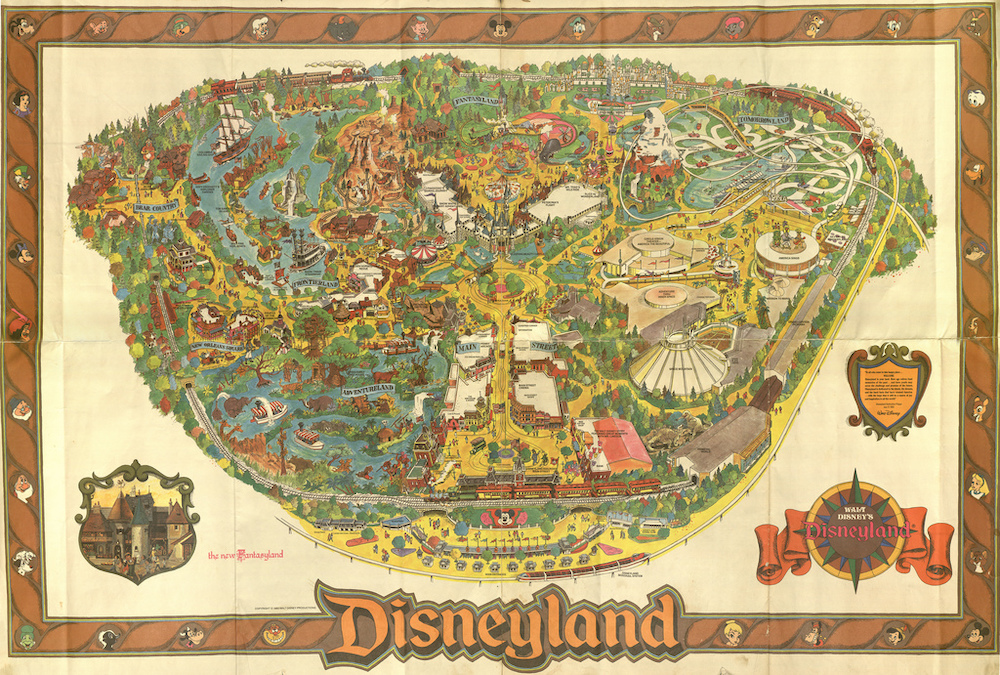 Compared to its newly released 2019 map, you can see that Walt’s original theme park has come a long way without disturbing the classical elements we all know and love. While some attractions have not lasted the test of time, others have been added without detracting from their neighboring classics. Despite having a shortage of land compared to the likes of Walt Disney World, Disneyland has cleverly utilized the land it has; adding in expansions slowly and steadily without compromising guest favorites. 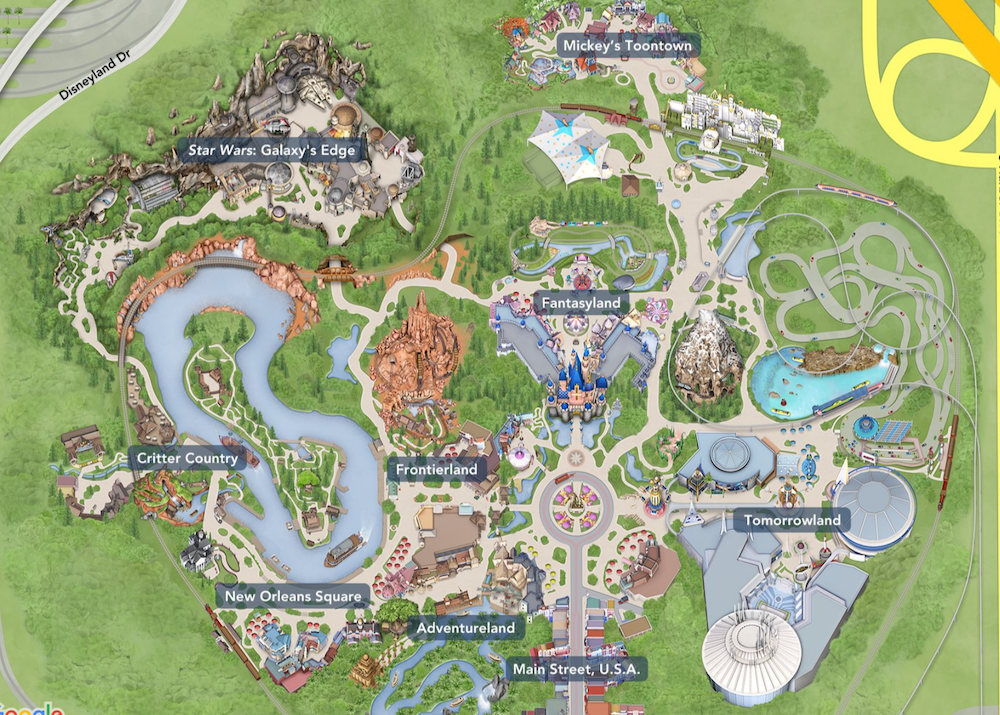 Whenever Disneyland has touched your heart, it’s always an unforgettable experience. The Imagineers of Disneyland continue to plan around our wildest dreams, allowing our imaginations to run free and return to that simpler time in our lives before the world caught up with us; our childhood.

Disneyland remains the birthplace of the idyllic concept that the interests of children and adults alike can align in one place. That together we can experience a world of fun, entertainment and laughter; where sisters can form a bond that will help them survive everything to come, including their parents; and where memories are made from yesterday, tomorrow and fantasy.

To Millie’s Anaheim, you are very dearly missed. My inner six-year-old will never forget you.

To my sister, Casey, I am very lucky to have you, childhood scrunchies and all.