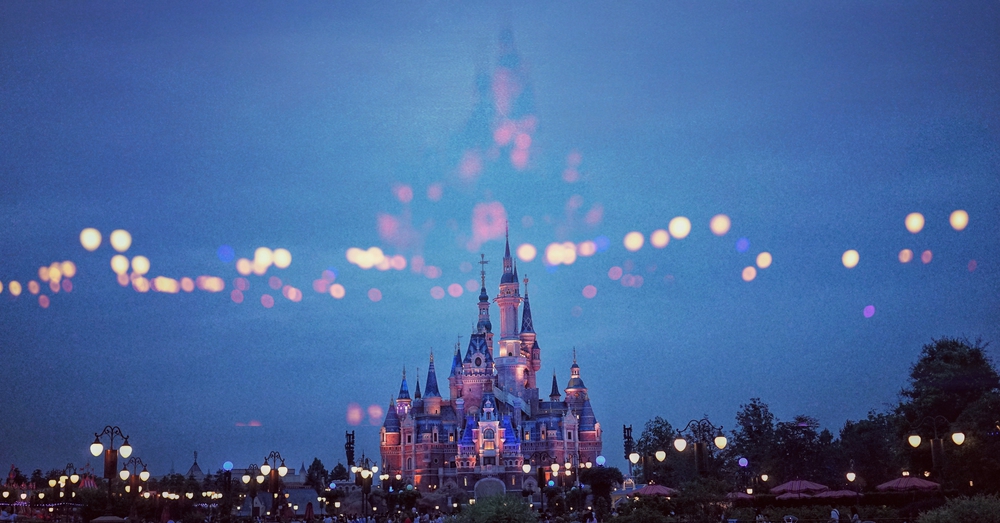 Let’s start this beautiful California morning in the Downtown Disney District at Starbucks. Perhaps beautiful Belle would have chosen Gaston over the Beast if he’d had opted for a tall salted caramel mocha latte with two pumps of vanilla instead of five dozen eggs? 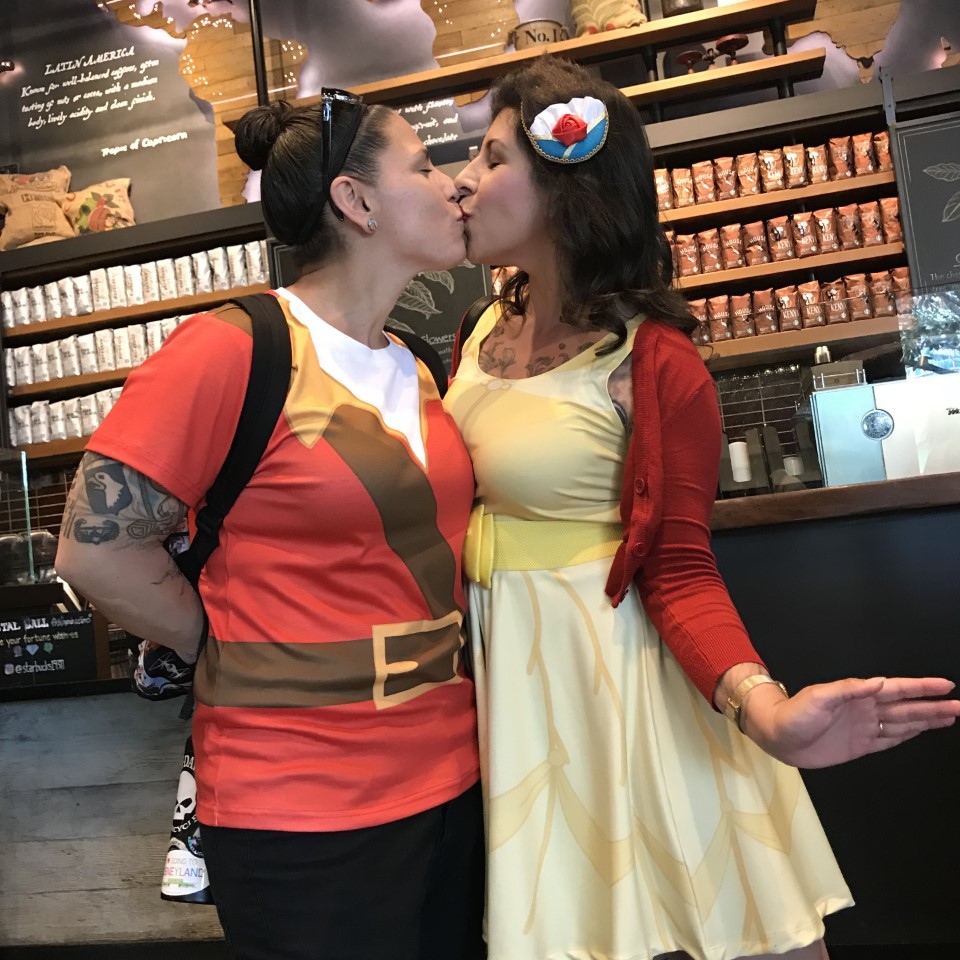 This particular Starbucks is located closest to the main entrance of Disneyland Park, right between Sunglass Icon and the gigantic World of Disney store. There is also another location closer to the monorail station, referred to as Starbucks West.

As I emerge from Starbucks and take a right, I notice a giggling couple getting a caricature drawn. Aren’t they cute? I’d like to stick around to see the finished product because it only takes about fifteen minutes or so, but I’m starting to legit feel like a creep. 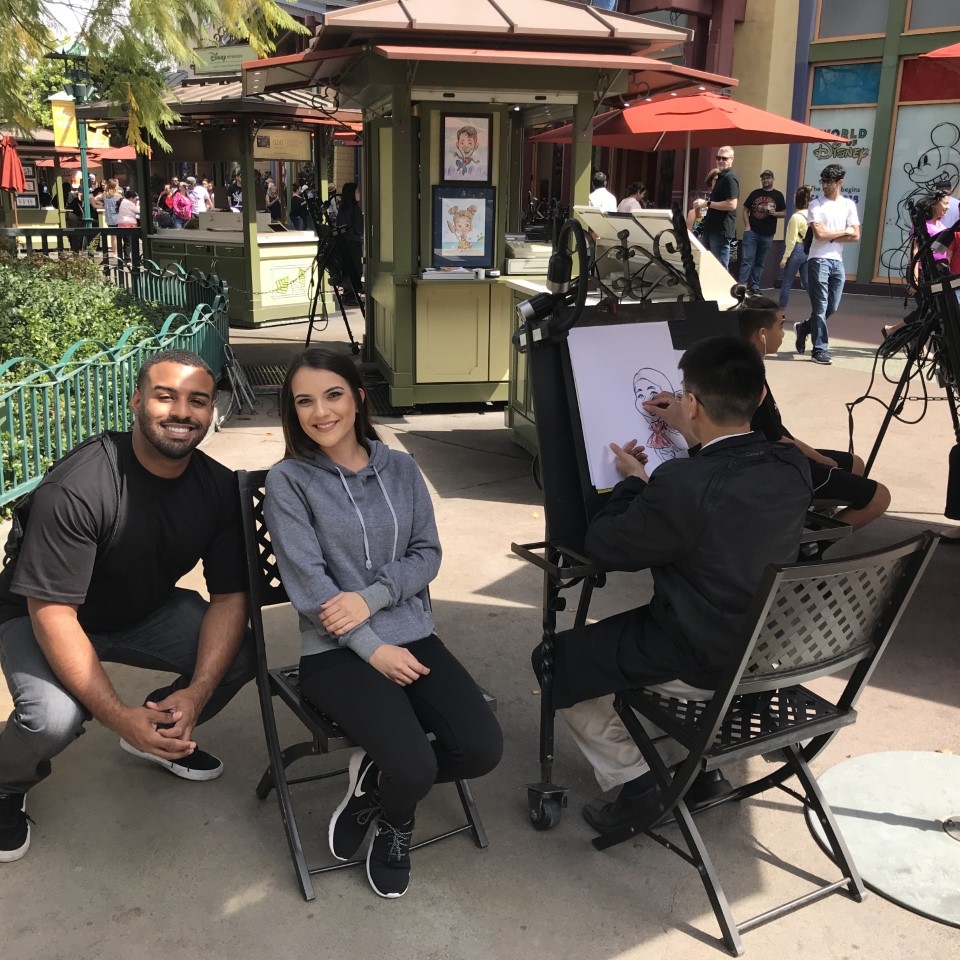 You can find other opportunities to pose for similar mementos at the Disneyland Resort in New Orleans Square and at The Silhouette Studio on Main Street USA.

Speaking of Main Street USA, I found these two lovebirds commemorating their vacation by becoming Honorary Citizens of Disneyland. They have a free button to prove it! This snazzy recognition is compliments of City Hall. You’ll find City Hall to your left after you pass under the Disneyland Railroad tracks. They just walked in and asked! 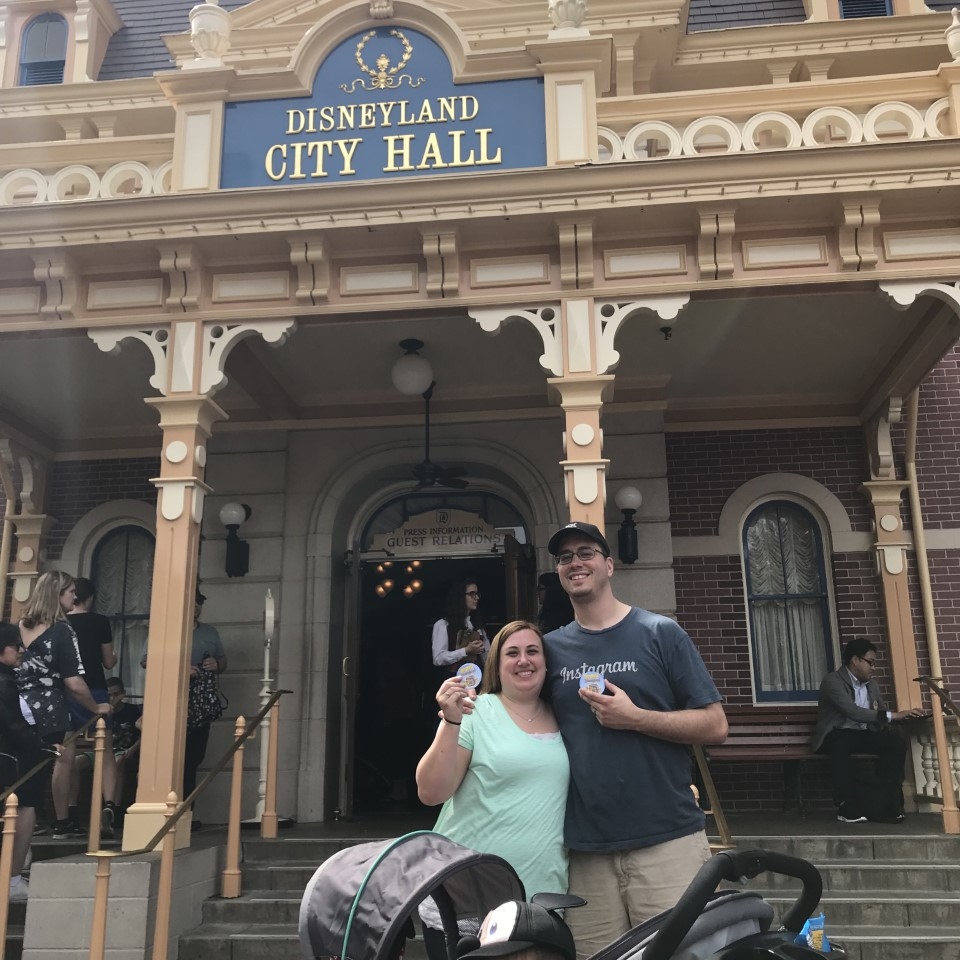 I’ve already bothered three confused couples today, so it’s time to tap into my own resources: my husband Tom. He’s walking ten paces behind me down Main Street USA because he refuses to skip. On my right, I see a vacant bench under the Palm Parlor Window! Nine times out of ten, this bench is occupied by a grandma saving seats for the parade. This was our lucky day! 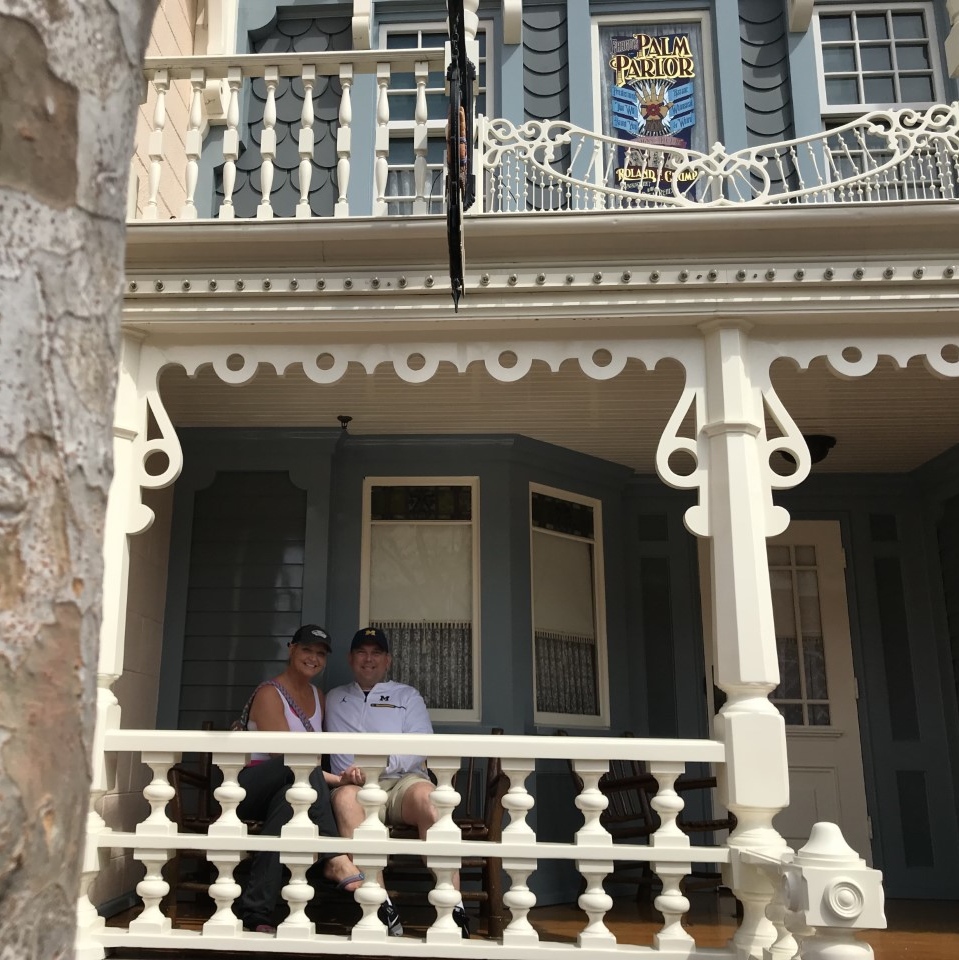 Well, that was exciting! Time to move on, however. Grandma is giving us the stink eye with a corn dog from The Little Red Wagon in one hand and a family-sized pile of jackets in the other. It might be a good idea to get a locker, grandma. We’ll save your seat. Now I want a corn dog.

Instead, let’s veer right and find true love Tomorrowland-style! I found this young couple reenacting their first kiss in a place far, far away at the Star Wars Launch Bay. I believe I heard her whisper “I love you”. I betcha you can’t guess his response! 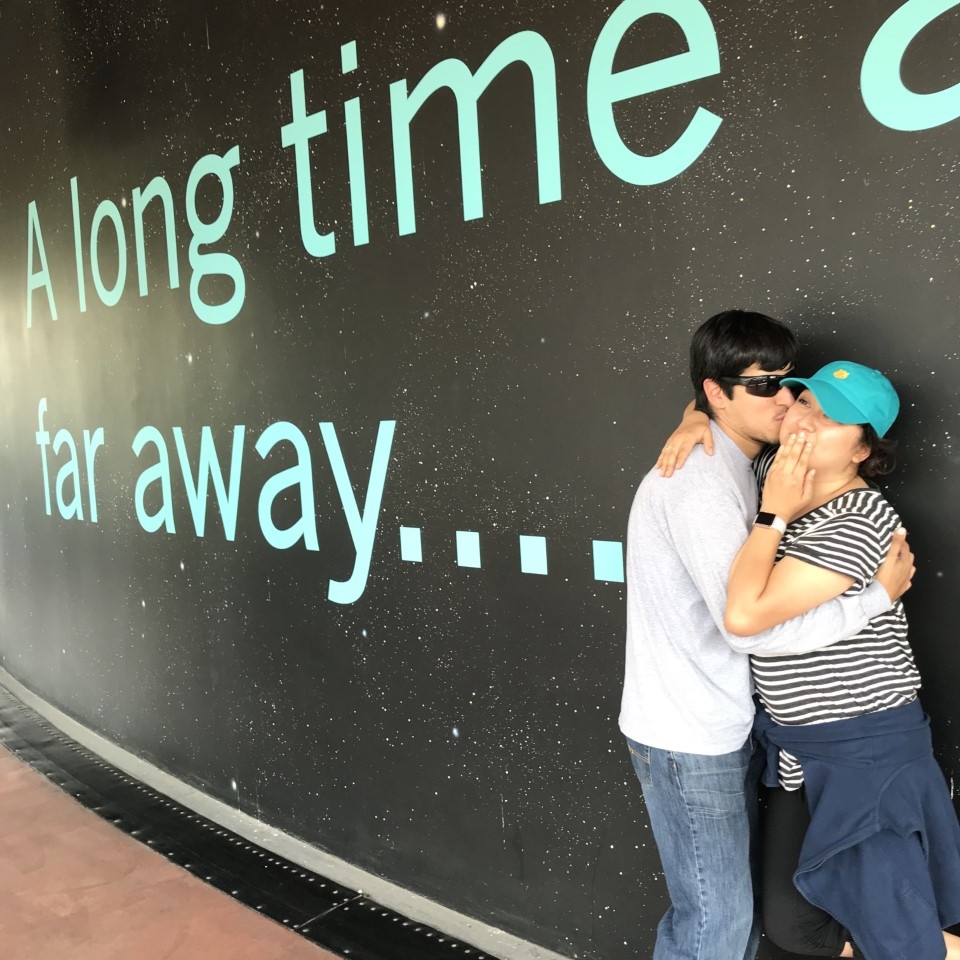 Update: He proposed later that trip! It would have made for a better article if he’d done it while I was photographing them, but I probably creeped them out a little bit.

Time to cross the hub in search of more happy couples!

As darkness falls over Frontierland, I notice a couple of feathered friends scurrying away from the crazy woman with a camera between Big Thunder Mountain Railroad and the Rivers of America. They are probably just late for a double date with Donald and Daisy. I’m certain it’s not personal. 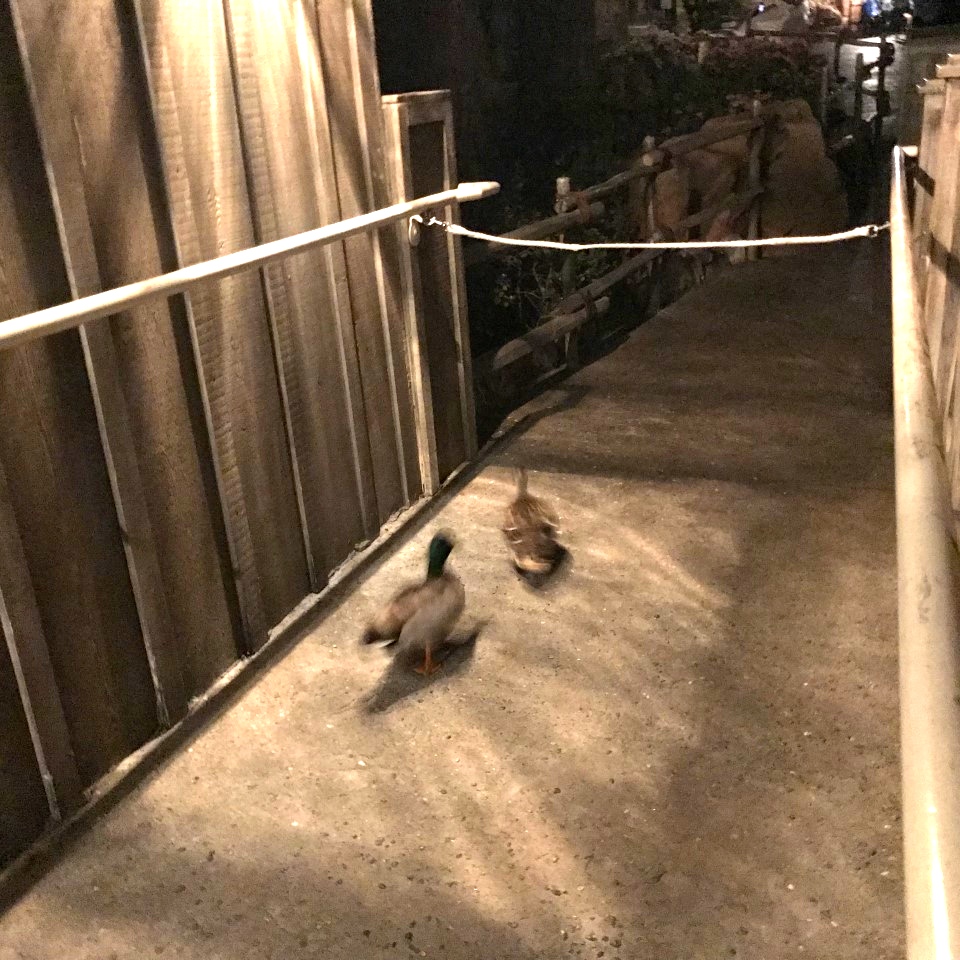 There is still time to make it across the esplanade to Disney California Adventure. I head straight to Cars Land to visit Mater’s Junkyard Jamboree! Why, you ask? Thanks to centripetal force, this scrambler-like attraction brings you and your passenger closer and closer together as the ride accelerates. This couple is about to get “carried away” on the tow truck-themed ride! 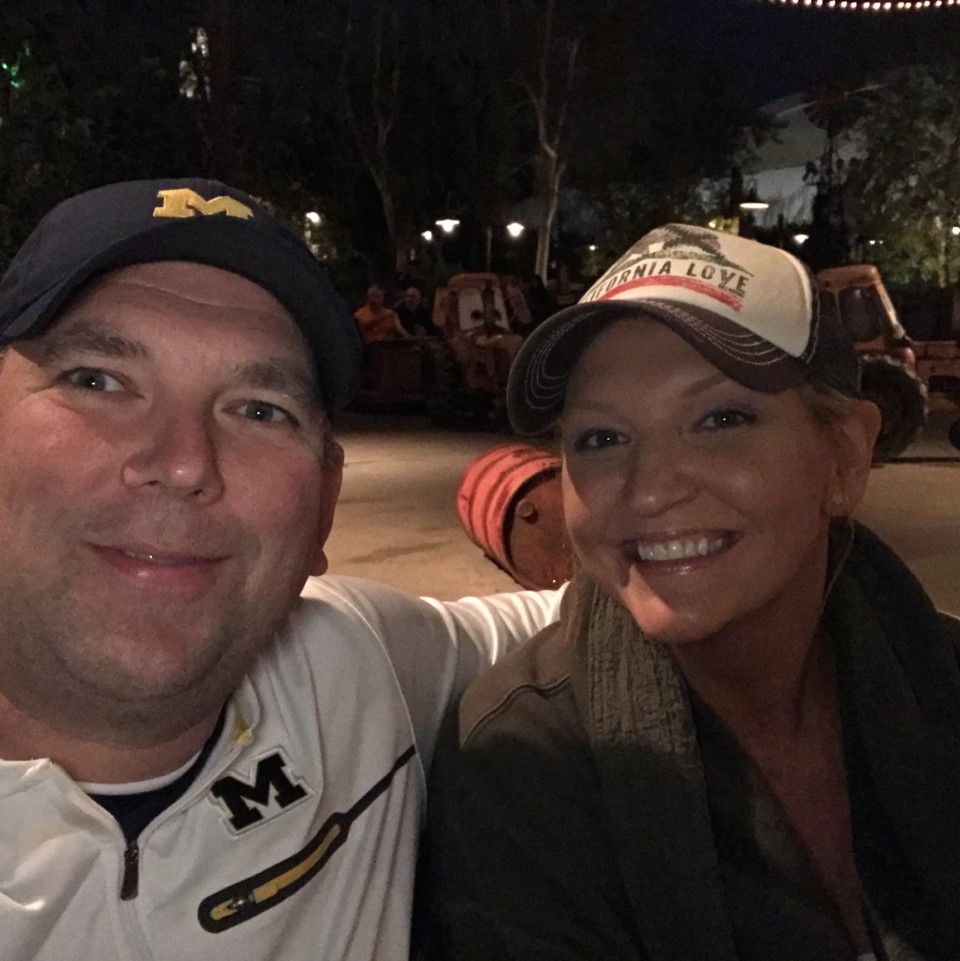 They also look a little familiar.

Now it’s time to say good night. But first, I’ve chosen to highlight a lovely couple enjoying a private moment near a crackling fire in the glorious lobby of Disney’s Grand Californian Hotel and Spa. 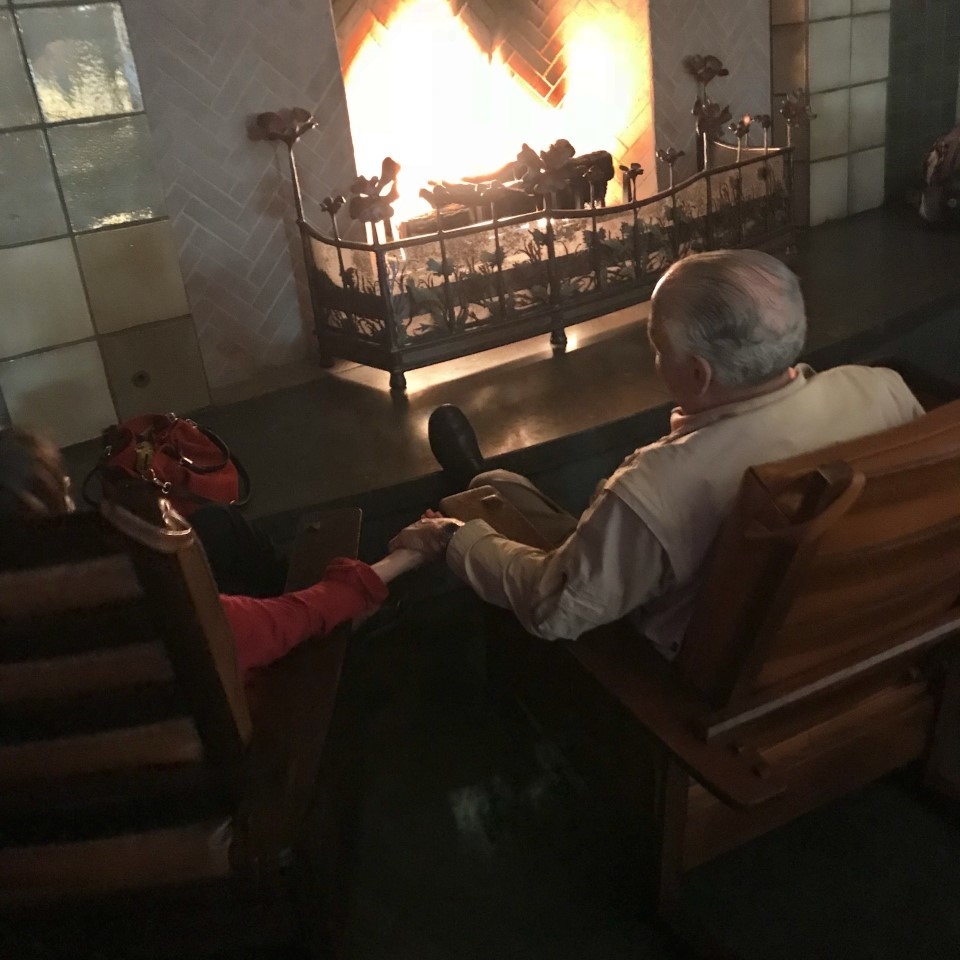 Among the magic of flying elephants, talking cars, a prince in disguise, and wandering duck couples in the Disneyland Resort, love is possibly the most magical of all!