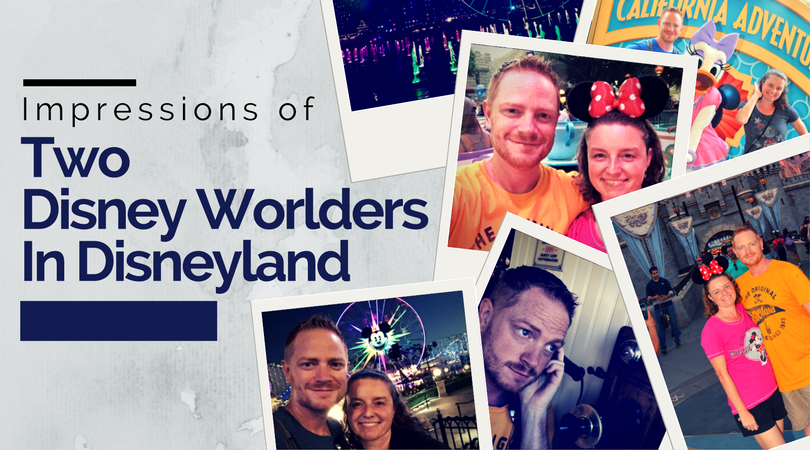 Walt Disney World is a seven-hour drive from our house, and we happily make the trip once a year. This past September we got to make the four-hour plane trip to Disneyland instead! I hadn’t been since I was a young student, and my husband had never been. Here are two Disney Worlders’ impressions of Disneyland. When our feet first reached Main Street, our eyes went to the castle. We could not believe how small it looked, especially next to the Matterhorn! Frankly, we were a little disappointed. All that disappointment dissipated when we got closer, however. The Sleeping Beauty Castle has a simple charm to it that Cinderella Castle lacks. Once inside the Castle Walkthrough, I truly fell in love with it. I enjoyed going through its winding corridors and reliving the story of Sleeping Beauty. It was as enchanting as a castle should be! While on my way to Guardians of the Galaxy – Mission: BREAKOUT, I ran into Thor, who was just standing on the sidewalk yelling hello to Groot. Groot was taking pictures with park guests, but Thor appeared to just be taking an afternoon stroll. Some people were talking to him, but no one was asking for pictures or mobbing him. A few minutes later, he walked away with a Marvel fan in Mickey ears, who was really enjoying asking his hero a lot of questions! After being in Walt Disney World, where characters always have handlers and huge lines for pictures and autographs, this was quite funny and somewhat odd to me. Later on, we witnessed Chip or Dale walking between the Matterhorn and the castle by himself, unattended. We weren’t sure if it was appropriate to ask for a picture or not. It was both strange and refreshing to see that characters can just walk the parks and interact freely in Disneyland! We stayed at the Hyatt Regency Orange County and took the hotel shuttle over to the parks each day. It was wonderful to be dropped off at the front gate and just be there! The Disneyland Resort reminded us of the Universal Orlando Resort. Like Universal in Florida, the main shopping and dining area is next to both park entrances. Downtown Disney runs right down the middle between Disneyland Park and Disney California Adventure. We loved the ease of going to both parks and all the shops and restaurants of Downtown Disney whenever we wanted. There were no extra buses or monorails that had to be taken to get to another part of the resort. Neither my husband nor I had ever been to Disney California Adventure, and we loved it! Even though it had some common rides to Walt Disney World, like Soarin’ Around the World, Toy Story Midway Mania, and The Little Mermaid – Ariel’s Undersea Adventure, much of the park was a totally new experience. Cars Land was fun and amazingly themed! We also really enjoyed the beauty of Paradise Pier. The park’s themed areas based on the different parts of the State of California transport you to completely different experiences within the park itself. While we enjoyed Matterhorn Bobsleds, Storybook Land Canal Boats, Mickey’s Fun Wheel, and other rides we do not have in Walt Disney World, we were really surprised by how much we enjoyed the rides we do have in Walt Disney World. They are common to both parks yet different, and it was fun to spot all the differences. Pirates of the Caribbean is my favorite Disney attraction, and as much as I love the one in Disney World, the one in Disneyland may be even a little bit better. The Disneyland version is longer, has two drops, and a New Orleans charm that I didn’t expect. On Disneyland’s Big Thunder Mountain, we enjoyed the explosions and the old western town you travel through at the end of the roller coaster. Each time I rode it, I tried to listen to all the voices coming out of the building facades. Both the Haunted Mansion and Space Mountain were closed during our trip, so we will have to catch them and compare next time! True to its reputation, the Disneyland Resort had some wonderful cast members. From the helpful young girl telling me where all the single rider lines were, to the friendly elderly man who took our tickets at the front gate, to the Boudin Bakery bakers who smiled and showed off their creations for our camera, the workers were amazing! The only thing we didn’t like was seeing the cast members leave each night on the staff buses as we waited for our bus back to our hotel. As a Disney Worlder used to never seeing cast members outside of their roles, that part killed the magic just a little.

If you are a Disney Worlder who has been to Disneyland, what were your impressions? My husband and I will definitely be going back to both Walt Disney World and Disneyland!