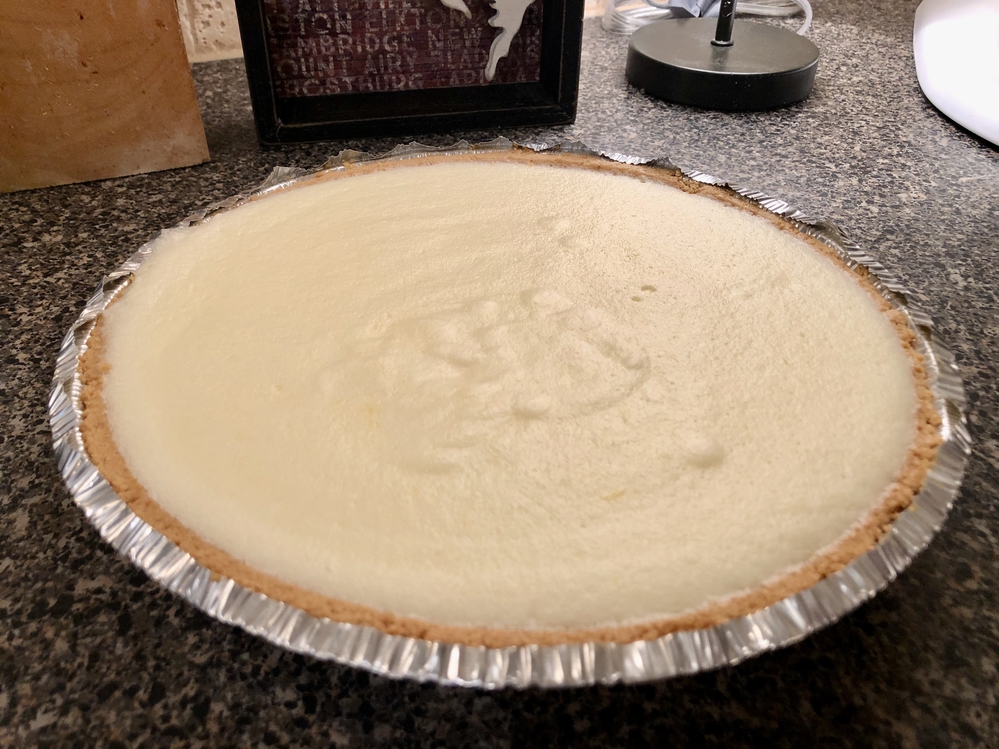 I love dessert. It's a love that has been with me all my life, and has only grown over time. I'm pretty sure that desserts love me, too.

When it comes down to deciding which dessert to choose after any given meal, I usually gravitate toward something ice cream-based, or cake. Pie, though it doesn't usually get my first thought, is something I enjoy, too. My pies of choice are citrus-based.

This week, D23 released a time-honored Disney family recipe for one of Walt's favorite desserts: Chris's Cold Pie. Walt had simple tastes (in a good way) in food, and he loved having pie for dessert. He was a person who knew what he liked, and he stuck with his favorites.

To honor of the birth of Walt's first grandchild, Christopher, the team behind Mamie and Ike Eisenhower’s Cookbook included the favorite family recipe in the 1960's publication. When Chris was little, he was given the chance to name the dessert, and, naturally, he named it after himself. Why not?!

Chris's Cold Pie is right up my alley: it's a lemon chiffon pie that requires few ingredients. We got super fancy last Saturday with our Palo Chocolate Soufflés, so it only makes sense that we'd take it down a couple of notches this weekend. I'm hoping it'll be a decadent, yet bright and light, dessert without too much hassle. We'll see how that goes.

Well, I didn't get very far before I ran into a hassle. To be honest, the hassle was my fault. Instead of ordering four lemons on my grocery pickup order, I ordered one. Now, I may not know all the things about lemons, but I'm pretty sure that you can't get half a cup of lemon juice from just one lemon. Augh. Back to the store I went to pick up another three. So, just pretend there's an additional 3 lemons in the picture above. Ahem. Of course, you can also use bottled lemon juice, but I decided that if we're going for it, we're really going for it. Freshly squeezed lemon juice and all.

The recipe mentions that we should prepare the crust according to the box. The graham cracker crust that I chose to use doesn't have to be baked to be used, but I chose to brush it with a bit of beaten egg and toss it in a 375 degree over for 5 minutes like the instructions on the crust suggested.

The result was a golden, glossy crust, and my thought was that it would pair well with the lemon filling.

A tip that I got from Rachel Ray a hundred years ago is to roll each lemon back and forth on the counter while pressing down. Doing so will make the lemon release more juice when you go to squeeze it.

Grab the four egg yolks and beat them with the water and the lemon juice. I got right at 1/2 cup of juice out of the 4 lemons. Whew.

The next step involves a double boiler just like the one that we used a few weeks ago for the Black and White cookies. My go-to method of double boiling is is take a medium sized pot, fill it just over halfway (or less depending on the pot you're using) with water, and sit a glass bowl on top of the pot. Bring the water in a pot to a rolling boil, and you've got a double boiler. Woot woot!

Combine 1 tablespoon of the unflavored gelatin, 1/2 cup of sugar, and 1/4 teaspoon of salt in the top of the double boiler. Add in the egg yolk mixture, and blend it completely.

Cook - and whisk, whisk, baby - the mixture until the gelatin dissolves and the whole thing thickens up.

Stir in one tablespoon of that gorgeous-smelling lemon rind that you grated (that's magical stuff right there), and take the pot off of the heat.

Carefully remove the bowl of the double boiler and place it in a bowl filled with ice. It needs to sit on ice for 20 minutes. While that's chilling, throw your 4 egg whites into the bowl of a stand mixer or grab your hand held mixer. It's time to beat them into a fluffy cloud.

This is again a moment when I'm thankful that my in laws gave me a stand mixer years ago for Christmas. It makes everything so much easier. Just like we did for the Palo Chocolate Soufflés last weekend, turn that baby on and beat those egg whites until they come to soft peaks.

Once the whites start forming soft peaks, you can begin tossing in the sugar, 2 tablespoons at a time. Keep beating until you have glossy, firmer peaks. After 20 minutes have passed, fold in the chilled lemon mixture.

Pour the pie filling into the crust. I used a 9-inch pie crust, and it was perfect for the amount of filling.

Okay, it's time for a bit of patience (why oh why do so many recipes require waiting?). Our patience will pay off. Eyes on the prize. The pie goes into the refrigerator for several hours.

Out from the fridge emerged this beautiful sight 3 hours later. It was fully set, and I couldn't wait to dig into it. Little did I know that a curious thing had happened to my pie.

My pie layers had separated. It's not like that in the sample pictures on D23's website, but lo and behold, here it was on my counter. I, at first, was disappointed. And then I remembered that this isn't a cooking show on The Food Network, and that things like this happen in kitchens like mine all the time.

And you know what? The pie was sooo good. I love lemon curd, and the bottom layer reminded me of the lovely taste of it. And the overall flavor of the pie was so wonderfully lemony. I decided that even if it didn't look like the picture, it was good enough. Life's all about the journey, right?

I'm sure that there's an easily explained oh-so-scientific reason why my pie separated, and I might continue to look into it in the days ahead, but in the meantime, I'm going to enjoy every bite of one of Walt's favorite desserts. The man sure knew how to pick 'em.

Ready to try Walt's pie for yourself? The recipe is below: