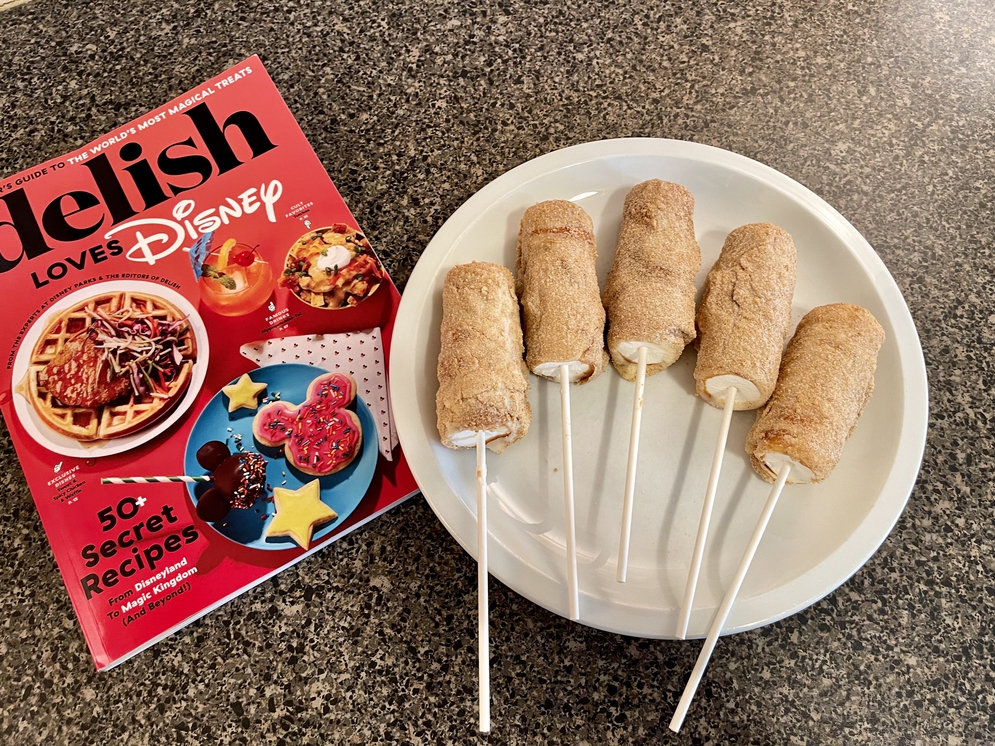 Ahhh, Disneyland. That treasure trove of all things magical, delightful and sweet…especially when it comes to their snacks. Disneyland doesn’t mess around. Snacks are taken very seriously in the California parks, and you and I are the ones who get to reap the benefits. However, for those of us who live on the East Coast, getting out to Disneyland might not be an every year kind of thing. It’s a pretty big undertaking to travel out to Walt’s park, and even more so these days. That’s where today’s Saturday Snacks recipe comes in. Just in case it’ll be a bit before you’re traveling out to Disneyland, we’re going to bring a bit of Disneyland right into our kitchens today. 🙂

As I mentioned in last week’s Saturday Snacks article, I had the joy of covering an event on behalf of The DIS in Disneyland last week. Over the course of this week, I’ve looked back through my pictures and videos with a longing and fondness for all that is Disneyland. It’s incredibly special, from its attractions to its cast members and right down to its sweet treats. It’s just not to be missed.

One of the most popular snacks these days can be found in several locations throughout Disneyland, Disney California Adventure, and the Downtown Disney District. It’s Churro Toffee, and I suppose that calling it simply popular is quite an understatement. The bakery team at the Disneyland Resort, seeing the uber-popularity of their Churro Toffee, came up with a marshmallow-based version of the treat called Churro Wands. Today, you and I will invite these Churro Wands to come and bring a bit of sweetness to our weekend.

The recipe for Disneyland’s Churro Wands can be found in Delish Loves Disney. This is the third recipe that I’ve made from the cookbook, and I have to say that I am loving baking from it thus far. Delish explains at the beginning of today’s recipe that this recipe is specific to Marceline’s Confectionery, which can be found in the Downtown Disney District. Last Thursday evening, I stopped by Marceline’s and inquired about the Churro Wands. The cast member stationed at the door handing out numbers to each guest who arrived (yes, Marceline’s Confectionery and its amazing treats are that popular. You have to take a number. Ahem.) explained that the Churro Wands are not actually available year-round, and are only made during the winter and spring seasons. I was so hoping to try one myself from the source, but you and I will need to depend on Delish Loves Disney to help fill in the gaps.

The recipe lets us in on a quick tip right off the bat in regard to working with lollipop sticks and marshmallows: wet the end of the stick to allow the marshmallow to slide onto the stick much more easily. Brilliant. I love when you and I get to pick up information for life like that. Not that I go around stabbing marshmallows with lollipop sticks on a regular basis, but I’m sure I will at some point in the future, and now I’ll be ready.

I proceeded to count out eight lollipop sticks and loaded each one with three large marshmallows.

This is the point at which I must admit that I was this many years old when I realized that there’s a difference between hot caramel and caramel in the ice cream section of the grocery store. I had no idea. Granted, I don’t usually purchase caramel for my ice cream (hot fudge is my topping of choice), but I was so glad that the recipe was specific that we need bottles of hot caramel rather than just caramel.

We’re to take those two jars of hot caramel and empty them into a medium saucepan on our stove. You’re going to need to dip those marshmallows in that hot caramel, so make sure it’s a pan that’s big enough for the job.

One wand at a time, I tipped the saucepan onto its side and dipped the marshmallows into the caramel that I had heated over medium-low heat. I placed each of the wands onto a parchment paper-covered baking sheet to allow them to cool, which the recipe said would take about 15 minutes.

Now I may not know all things marshmallow wands, but I do know that caramel sitting on my counter isn’t necessarily going cool and set completely in just 30 minutes. I came back to the pan after allowing the 30 minutes to transpire, and discovered that my assumptions were indeed correct. Thus, into the refrigerator my baking sheet went. I gave the wands 30 minutes or so to completely cool, and then proceeded with the recipe.

I grabbed a pie plate out of the cabinet and tossed in the required 1 1/2 teaspoons of cinnamon, 3/4 of a cup of granulated sugar, and 1/3 of a cup of graham cracker crumbs. I mixed things completely with my mini whisk, and set the pie plate aside.

Now comes the part which I have dreaded just a hair since first deciding to attempt this recipe: melting the white chocolate. Melting chocolate can be a bit of a tenuous proposition. Chocolate can be a bit fussy when you’re trying to melt it, and one wrong step will lead to a hard ball of chocolate in your saucepan or double boiler rather than gloriously creamy melted chocolate.

The recipe calls for you and I to melt the chocolate in another saucepan on the stove. I knew better than this, and knew that simply tossing the chips into a pan would likely burn the chips rather than melt them. I consulted the back of the Ghirardelli white chocolate bag, and found that they would like for us to melt the chips using a double boiler method. The double boiler method calls for us to place some water in a small sauce pan, place a glass bowl on top, and toss your chocolate chips into the glass bowl. Bring the water in a saucepan below to a simmer/very low boil, and those chips will begin to melt. Keep things stirred, and eventually you’ll have nicely melted chocolate. That being said, even using the double boiler method, sometimes the chocolate ends up in a hard ball of goo. It’s happened to me before, and it’s always frustrating.

How about a Minnie Candy Apple? Made, of course, by a cast member who was born for the job in more ways than one! 🍬❤️ #disneyland #dlrmagicishere #downtowndisney #candy pic.twitter.com/gOd8iE1KYp

The cast members at Marceline’s Confectionery never seem to have this problem with their white chocolate (see the video in the tweet above). Their chocolate is gloriously melty and viscous, and likely has a fat such as butter or cream involved to assist their chocolate in remaining something that will be liquid-y enough to coat a marshmallow wand or a candy apple. My melted chocolate? Not so much.

I brought the water in the double boiler up to temp and stirred and stirred the white chocolate chips until they melted.

I brought my caramel-covered marshmallow wands out of the fridge, and one at a time rolled them into the white chocolate (letting the excess drip off like I did with the caramel) and then very gently rolled them through the cinnamon, sugar and graham cracker crumb topping before placing them on a fresh sheet of parchment paper to cool.

Everything was going swimmingly, well somewhat swimmingly, until the chocolate seized completely and the melted chocolate became a hard and crusty ball. I had reduced the temp on the chocolate to prevent it from burning, and then when it began to cool too much, tried to bring the heat back up just a bit. “NOPE,” said the white chocolate. Sigh. Thankfully, I managed to get five of the marshmallow wands covered before the whole thing went kaflooie.

That being said, as I was covering things with the white chocolate, it was still a bit thick and gloppy as opposed to the gloriously thin, completely fluid white chocolate that the cast members use at Marceline’s, but I made it work as best I could.

The recipe now calls for you and I to allow the completed marshmallow wands to sit on the counter for 15 minutes to fully set. At 15 minutes, my wands needed a bit more time, and I believe I ended up giving them close to 30 to fully set up. Which they did. Without the use of the refrigerator, thankfully.

Friends, even though I ended up with only five out of eight marshmallow wands, I’ve got to tell you that it was so much fun to make these, and they were equally as fun to eat. The layers of caramel, white chocolate, and churro topping were amazing.

Be ye warned: this snack is super sweet, and will surely satisfy the very biggest sweet tooth in the bunch. But mannn, these churro marshmallow wands are so good.

This would be a great recipe to make with friends or family, or all by yourself on a quiet weekend afternoon. I love that it doesn’t take many ingredients or very many steps to bring a taste of Disneyland into our very own homes.

And maybe someday I’ll do a bit of research, and possibly even talk to a cast member or two who has been there and done that, to figure out how to prevent my chocolate from seizing.

In the meantime, I’ll just be over here having a little photo shoot with the marshmallow wands that did turn out the way that I wanted them to and I’ll be savoring every single morsel.

I’m so glad that you stopped by to give this a read today! I hope that your weekend is a fantastic one, and I hope that it’s sprinkled with a little something sweet. 🙂

What are you baking/making these days? Please let me know in the comment section below.

PS. If you’re new to the Saturday Snacks series, click here to get caught up on what we’ve been up to.

Ready to give Marceline’s Confectionery’s Churro Wands try? The recipe is below: