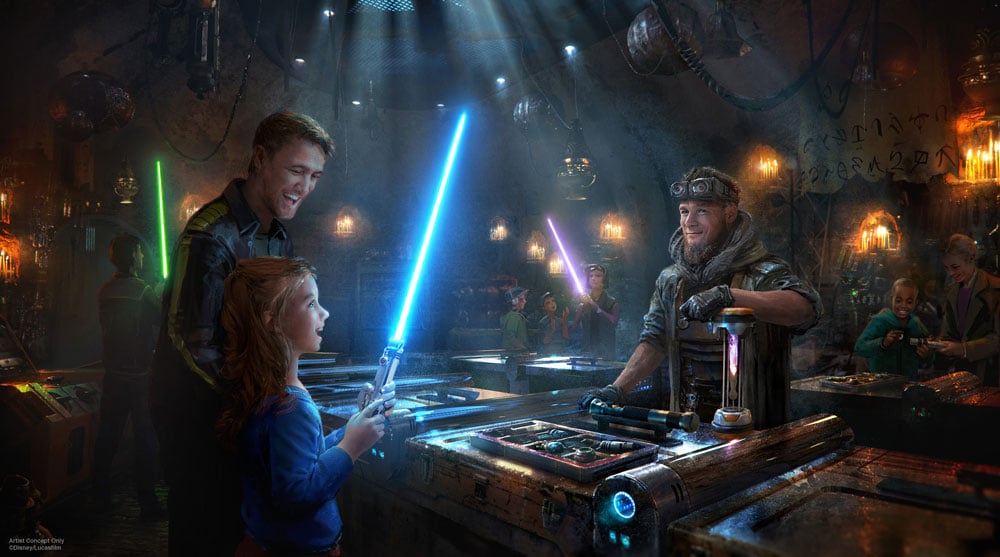 Disney recently provided more information about what guests can expect to experience at Star Wars: Galaxy’s Edge when it opens on May 31st at Disneyland and August 29th at Hollywood Studios in Walt Disney World. Since you learned about the overall story behind this concept in the first article of this series, “Translating Star Wars To Disney Speak”, the information was probably more digestible.

The description for Millennium Falcon: Smuggler’s Run presents us with the character of Hondo Ohnaka, who is requesting our services aboard the Millennium Falcon. It was also revealed that an interactive lightsaber-building experience is coming. This was accompanied by many words that sound like gibberish to an untrained ear. It’s a good thing you returned to proceed with your training!

Hondo is a pirate who first appeared in the animated series Star Wars: The Clone Wars, and in the more recent animated series Star Wars Rebels. While both series have concluded, it was announced last year that another season of Clone Wars is in production to be released on Disney’s new streaming service. This is exciting news for Star Wars fans who can’t get enough of their favorite galaxy of characters, but it certainly isn’t required viewing for Disney Parks fans who simply want to take in Galaxy’s Edge.

Pirates in the Star Wars galaxy have the same goals as other pirates in the Disney Parks: Their intentions are to steal, barter, or kidnap as a livelihood — but without as much singing. Some are pure evil, while others are just trying to survive in a tumultuous galaxy.

Hondo can be likened to the classic Disney character, Pete (aka Peg-Leg Pete). You may know him as Mickey Mouse’s arch enemy from some of Walt Disney’s earliest cartoons, or more recently as the mischievous, misunderstood troublemaker from the Mickey Mouse Clubhouse show on Disney Junior. Similar to Pete’s early appearances, Hondo is a despicable character that will not hesitate to harm those who stand in the way of his greedy endeavors. But as time goes on, he becomes a more sympathetic villain, to the point that the lines between friend and foe are blurred. He has no allegiance to The Resistance (the good guys) or The First Order (the bad guys). He will side with the one who benefits him the most at the time.

His charming accent and exaggerated mannerisms, in the style of Captain Jack Sparrow, give him an endearing quality. He is a character that you want to root for, even if his methods make you cringe. Partnering with him for a mission in Smuggler’s Run might leave you wondering which side you’re on! 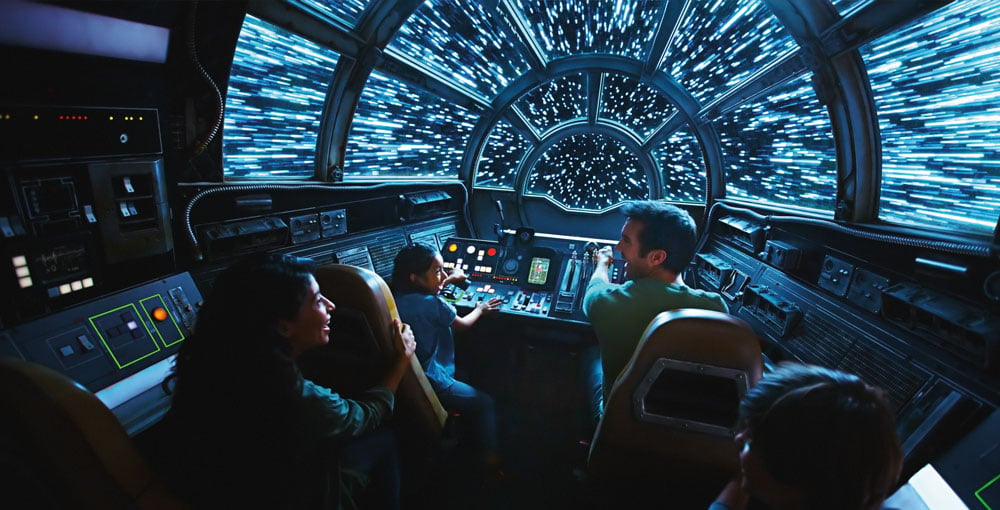 The Millennium Falcon is a starship that was introduced in the first Star Wars movie in 1977. It belonged to Han Solo and his trusty co-pilot, Chewbacca. Fans instantly fell in love with the underdog of a ship that Luke Skywalker dubbed a piece of junk. Han famously retorted, “She may not look like much, but she’s got it where it counts, kid.”

The ship most recently appeared in Solo: A Star Wars Story. This movie tells the tale of a young Han Solo and how he acquired the Millennium Falcon from a man by the name of Lando Calrissian.

While Solo was a movie that told a side story, the Millennium Falcon also appeared in the newer sequel movies. The 2015 reboot of the saga, Star Wars: Episode VII The Force Awakens, introduced us to Rey. Her adventures led her to the ship and its owners, as it played a critical role in the battle of good versus evil. Just as John Ratzenberger is a constant in every Pixar film, the Millennium Falcon is a constant in Star Wars lore. 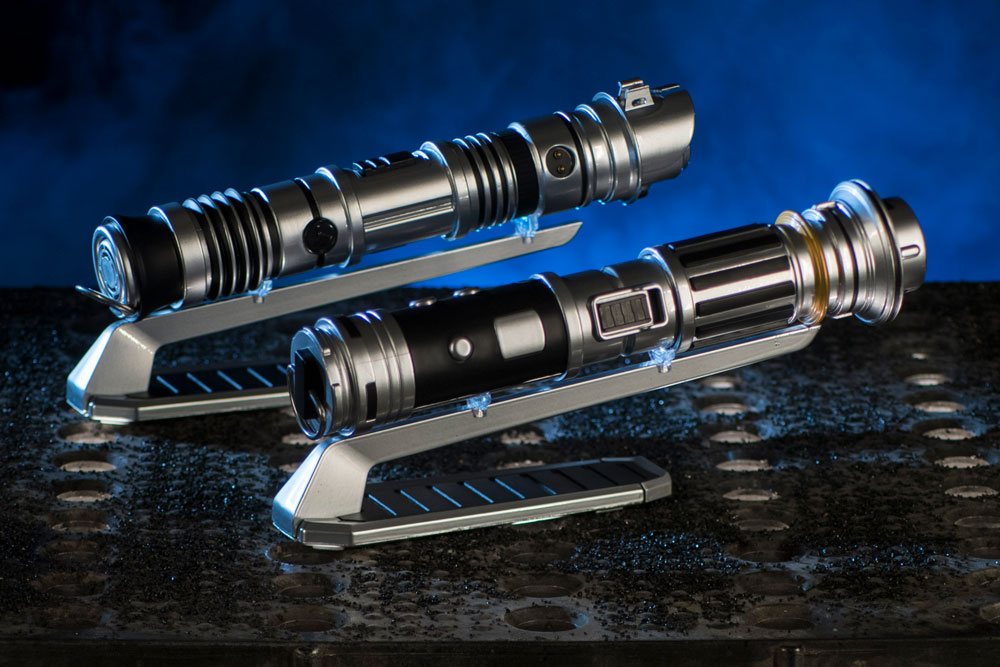 A portion of the Galaxy’s Edge press release that was hard to miss was its use of Star Wars lingo. There were words dropped in there that would have made new math look easy to Mr. Incredible. Before you give up on trying to understand what any of it means, remember there was a time when Bibbidi-Bobbidi-Boo, Supercalifragilisticexpialidocious, and Dinglehopper were not part of our vocabulary.

The Force – In the movie Moana, we see her connect with the ocean in a way that no one else understands. Although it’s accessible to everyone, it calls to Moana. She feels it as if it were a part of her and she can harness its energy to do amazing things. The Force is similar. It is the energy that surrounds all living things. Some beings (human and otherwise) in the galaxy are more “force-sensitive” than others. They can channel the energy to give them heightened abilities.

Jedi – Force-sensitive beings that are trained to use their abilities to help others. Luke Skywalker was a Jedi.

Sith – Force-sensitive beings that use their abilities to gain power and control over others. Darth Vader was a Sith.

Lightsaber – A sword-like weapon that is used by the Jedi and the Sith. The user constructs the hilt to their own specifications and the blade is powered from the energy of a kyber crystal.

Kyber Crystal – A crystal that is in harmony with The Force in such a way that a Jedi is guided to it.

Padawan – A student learning to become a Jedi.

Those six vocabulary words, along with your lesson about Hondo and the Millennium Falcon, will give you a strong foundation as you enjoy Galaxy’s Edge. The next installment of this series will explore the significance of the various food, beverage, and merchandise offerings of Black Spire Outpost. It won’t be long until you are educating your friends about the adventures that await at Disneyland and Hollywood Studios!