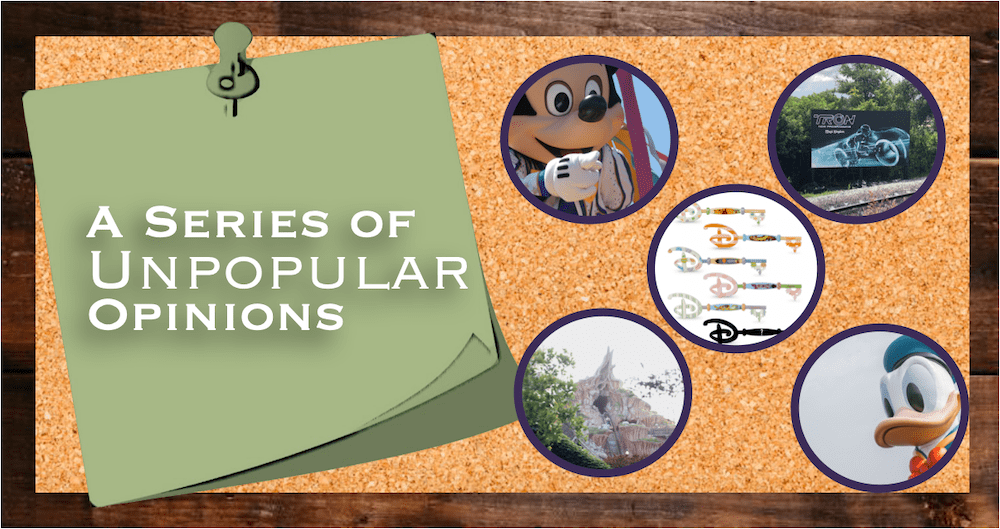 It’s been a while since we shared unpopular opinions together here on The DIS, and as I woke up to a colder-than-usual winter’s morning down here in Sydney, I thought, eh, why not throw myself to the wolves and give this another crack. Glutton for punishment, I know. Though most times when we have gone down this road together, I find it brings out discussions I wouldn’t have expected and sometimes even productive conversations that can change people’s minds — even my own as you might have seen in Part One. Need a recap? You can also catch up on Part Two and Part Three before we get started.

1: I Still Love the Disney Parks

It’s become taboo to say anything that isn’t a complaint about Disney recently, most excitement or positivity seems to be met with disgust or accusations of being on the payroll. For me, the truth is that while I can absolutely admit that things have changed, a little Disney magic will always outshine having no Disney magic in my life.

Many of you know that I am Australian, so Disney isn’t quite as accessible for me as it may be for some of you, but even with that aside, I just love it. I’m always going to love it. I might have some negative opinions about changes they’ve made or things I don’t like, but as a whole, I can’t lose sight of the history I have there, of the feeling I get when I hear that music, and of all the memories to come that I know each park holds for my family. It’s become unpopular to say, but I love it, in a deep-seated way that I can’t imagine ever being able to shake.

Yep, even though I love me some Disney nostalgia, and I know I will miss the current (original) version, I can appreciate that it holds negative references for some people. The first iteration of this ride will always remain a classic, but as the world changes, we need to be prepared to change with it and as such, embrace the new and improved inclusivity it brings.

Recent reports of a 2024 opening have me looking forward to this one even more. I adore the Princess and the Frog movie, all the characters, and the music; it’s fantastic. I do think this theme will gel well with the attraction the way it stands and be a whole lot of fun.

Every week when I host the Monday Merch Meeting, I see these collectible keys popping up, big ones and mini ones, all in different designs, and every time I stop, and this, why? I’m genuinely hoping that someone can explain this one to me because I just don’t understand the appeal.

Disney is releasing more and more of these little things and each time my curiosity escalates. What is their purpose? What does one do with these?

4: I Have Completely Lost Interest in TRON Lightcycle Run at Magic Kingdom

I know, it’s a new rollercoaster ride in Magic Kingdom; right up my alley under usual circumstances, however this time, I’m just over it. I feel like Tron is the equivalent of Disney’s crying wolf. It’s been about five years in the making and the completion of this attraction doesn’t seem to be much of a priority for Disney with little standing in the way of its construction.

Originally slated to open in 2021 with the 50th Anniversary, Tron is still seeing very slow progress as it creeps towards some sort of opening. At this point, I’m already sick of it and don’t feel drawn to testing it out at all.

It’s been a few years now that I wasn’t quite ready to share this one, especially amongst an audience of Disney fans, but alas, it remains true. Donald Duck annoys me. We’ve talked about how despite my sarcastic exterior, I’m a fairly positive person in general, well, Donald just rubs me the wrong way.

He’s the only inherently unhappy Disney character that isn’t cast in a villain role, which usually would be a non-stereotypical composition I would find interesting, though dear Donald just never did it for me. Just be happy, Donno! You’ve got Daisy — though I’ll never know how — and friends like Mickey and Minnie, c’mon dude, buck up!

That’s all I have for this one. Gather thy pitchforks and descend. Just remember, it’s all in a bit of fun, so if you disagree, feel free to present your case below but let’s not take it all too seriously. ☺️