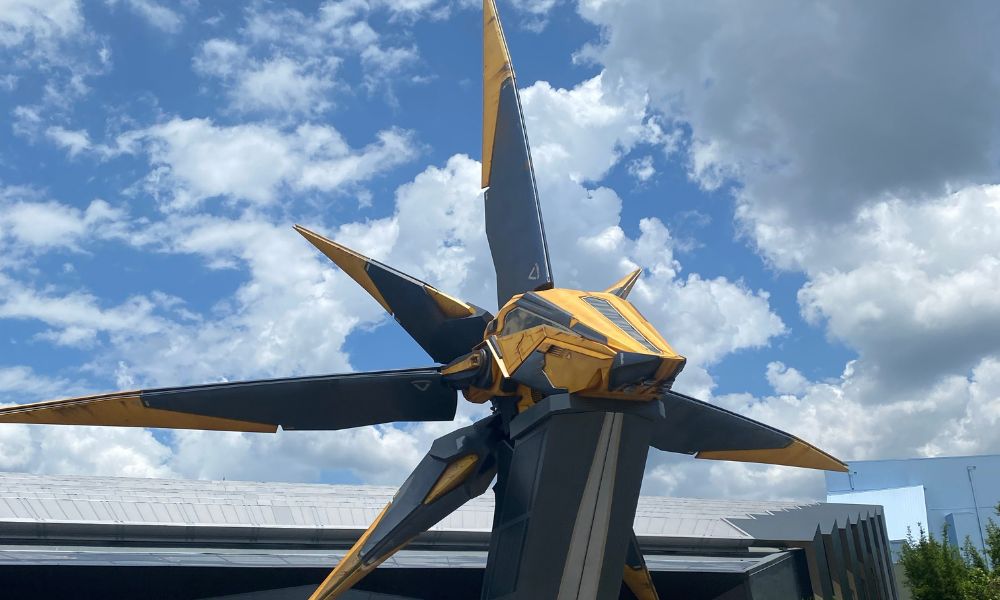 Anytime a new attraction opens at Walt Disney World, I like to look at the Disability Access Service (DAS) procedures to know what to do each time I ride and help those who may have questions. For Remy’s Ratatouille Adventure, I told the cast member handling the soon-to-be Lightning Lane that I use DAS, and they let me right through after scanning in. It was a bit different for Guardians of the Galaxy: Cosmic Rewind.

Before the attraction entrance, there are some umbrellas and high-top tables with cast members. The A-frame describing the use of this location is covered a majority of the time by families or groups. The A-frame states that the area is for those utilizing the Disability Acess Service or Child Swap. Here is where you let a cast member know that your boarding group has been called but that you utilize DAS. They let guests know the current wait time to see if it was a managed wait time or if they wanted to go through the Lightning Lane. They repeatedly let those using DAS know that they will miss most of the queue and story if they go through the Lightning Lane. When they told me the options, I let them know I would still prefer to use the Lightning Lane so that I could see the difference, and I knew in the end, it would make me feel more comfortable. After I decided, they scanned my Magic Band on the iPhones they carry to convert my virtual queue into a Lightning Lane.

After meeting with those cast members, they guided me to the Lightning Lane entrance, where I would meet the next cast member, scanning me through and ensuring that the light turned green. After that, I entered the Wonders of Xandar and saw the first portion of the queue, then was looped through a plain hallway that had minimal theming. The “normal” line and the Lightning Lane merging point are at the first pre-show, where guests are introduced to Nova Prime.

I would say the difference between the two lines was ten minutes. At the DAS check-in point before the attraction entrance, they told me the standby queue was about a 20-minute wait, and I waited about 10 minutes in the Lighting Lane. If you need any assistance before riding regarding your DAS pass, go to the nearest blue Guest Experience Team umbrella or stop at Guest Relations on the way into the park. Before going to the attraction, I stopped at the blue Guest Experience Team umbrella outside the ride to ensure my DAS pass was up to date. They have several cast members stationed there, making the process seamless.

Will you be riding Cosmic Rewind on your next Disney vacation? Let us know in the comments.