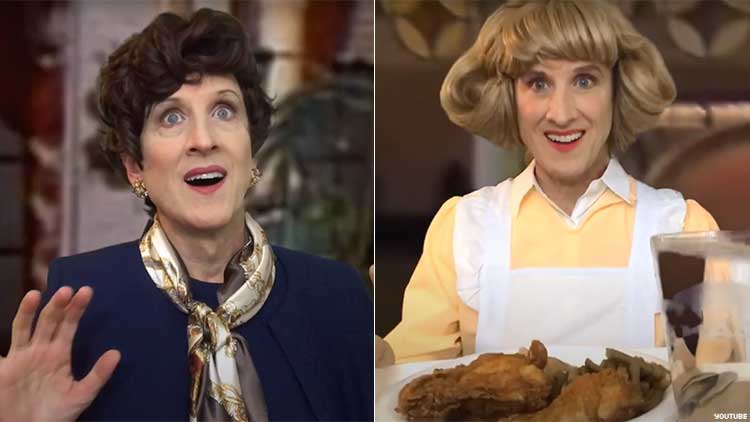 As the world began to shut down this past spring due to the Novel Coronavirus pandemic, and the gravity of the virus began to sink in, everyone looked for ways to bring some comfort, familiarity, a little bit of happiness to their lives. Disney fans were no different.

Although some of the theme parks have reopened, the pandemic has not gotten any better. For some, it is worse.

Like many others, actor, comedian, and director Jack Plotnick felt the same way. “When the pandemic hit I would often find myself watching YouTube videos in bed at night, trying to get my mind off the sadness we were all experiencing,” said Plotnick. “So of course my interests turned back to what made me so happy as a kid, and I sought out videos about the Disney Parks, rides, restaurants, whatever!”

One of those videos Plotnick watched was the Disneyland 10th anniversary special on the “Walt Disney’s Wonderful World of Color.” Broadcast in 1965, the first half of the special begins with Walt Disney showing Julie Reihm, Miss Disneyland Tencennial, around as he tells her about some of the exciting new attractions the Disney Imagineers were working on for Disneyland.

Click here to see the “Disney made a Plaza Restaurant” video.

Watching the show in bed, Plotnick thought a number of those scenes were perfect to satirize. One in particular was when Walt introduced Julie to Harriet Burns. In the special, Burns, who was the first woman hired in the Walt Disney Imagineering department within the Walt Disney Company, is working next to a model of the upcoming Plaza Restaurant on Main Street U.S.A. In the actual video, Burns is working on a small patio umbrella for the outside of the model.

Plotnick turns this scene into a love story of sorts. He imagines Burns is in love with Walt, but it is clear Walt does not have the same feelings for her.

In the “reimagined” version, Burns (portrayed by Plotnick) is working on one of the small figurines, one that is to represent Walt. In the video, Walt says to Julie, “We’re putting in the little umbrellas and the tables for the scale model.” Walt then points to the small figures and says, “Actually, this is the size of people right there.”

Plotnick’s Burns looks up from her work and says, “Oh and look Walt, I’m making a little figure that looks just like you.” As she holds up the clay figurine, Walt gives a little dismissive chuckle and immediately leaves with Julie. As he brings her over to see an interior view of the restaurant, Plotinick’s Burns has such a look of sadness and disappointment on her face it breaks your heart.

After Walt introduces Julie to John Hench (also played by Plotnick), Burns sigh,s and in a scene straight from Snow White and the Seven Dwarfs, violins begin to play in the background as birds chirp. Plotnick’s Burns looks at the scale models and says, “Wanna know a secret? Promise not to tell?” and launches into the I’m Wishing/One Song from the 1937 animated film.

In typical Disney fashion, Burns is transported into the scale model of the restaurant where she leaps around and encounters one of the waitresses (portrayed by Plotnick). She hands Burns a plate of what is now the Plaza Restaurant’s famous three-piece fried chicken platter.

Burns is brought back to reality by a booming voice but much to her disappointment, it is not Walt but Blaine Gibson (Plotnick). Of all the characters he portrays, Gibson is the one that Plotnick most resembles.

Burns tells Gibson to “buzz off” and soon realizes that love may still be in the air, but from someone else.

In an interview with Matt Krul, host of Imagineer Podcast, one of Burns’ granddaughters revealed that Harriet formed a bit of a romantic kinship with Blaine after their spouses passed. So, Plotnick’s story is pretty close to the truth.

Plotnick’s costuming is a near identical copy of Burns and many of the other characters he portrays. “Because I shot these during quarantine, I was dreading searching for matching clothes at the thrift stores,” said Plotnick. “I told myself I would go to a single store, and whatever I could find would be what I’d wear. And the wonderful thing was I found everything I needed.”

Currently there are three other videos by Plotnick based on the same TV episode. In one he portrays Mary Blair. She is working on the “it’s a Small World” exterior. Plotnick’s outfit is a near duplicate for Blair’s.

“For the “it’s a small world” video, I was at the register, peered into the display case, and there it was – the EXACT necklace that Mary Blair had been wearing! And it was literally the only necklace they had on display. Maybe that was just a bit of the Disney Magic working in my favor!”

Click here for the “Disney made a Small World ride” video.

In “Disney made a small world ride,” follows Walt as he brings Julie around to show her the work being done on the “it’s a small world” attraction. Introducing Julie to meet Mary Blair (also played by Plotnick), Walt tells Mary to describe what she is working on. Plotnick’s Blair, who looks absolutely exhausted, says she is working on a sketch for the attraction. “I made [a preliminary sketch], I finished it at some point last night,” Plotnick’s Blair says. “I don’t even remember doing it … I stayed here until like 1:00 a.m. and found this … it’s not bad.” Blair then holds up a rendering from one of the attraction’s backgrounds. “I mean it’s really got some charm,” she concludes.

As Walt brings Julie to other areas, the camera pans across the room and Plotnick’s next imagined scene occurs between two women – one working on a doll and the other on their costumes.

Here one of the women is asking the other what “this ride is all about?” The other woman says it is a boat ride with all the children of the world “singing and dancing to this really cute song.” The other woman just nods, not really getting the whole point of the ride as she keeps asking, “then what happens?”

Still confused, she asks again what happens. The other woman says nothing – they just keep singing the song in their own language. Exasperated, the other woman asks, “How? Why would anyone want to hear that again and again?” Referring to the Sherman Brothers love-it-or-hate-it song, it’s a small world.

Plotnick says there are more videos to come. “I love making them, and am thrilled that they are tickling so many people. I especially love, and am honored by, the messages from actual Disney employees and even Imagineers! I have been obsessed with them since childhood, so it’s a dream come true to enter their world in some small way. And it feels nice to honor the people who brought me so much joy as a kid.”

If Plotnick looks familiar that is because he has been in numerous feature films, television shows, and national commercials. Feature films include Gods and Monsters and Meet the Fockers. TV credits include Grace & Frankie, Glee, and Wizards of Waverly Place.

Currently, Plotnick has a feature film, Space Station 76, which he co-wrote and directed, on Starz! It stars Patrick Wilson, Matt Bomer, and Liv Tyler. “The film takes place in the future as we had imagined it in the 1970’s; very much inspired by my love for the Tomorrowland and the Contemporary Hotel of my childhood,” says Plotnick.