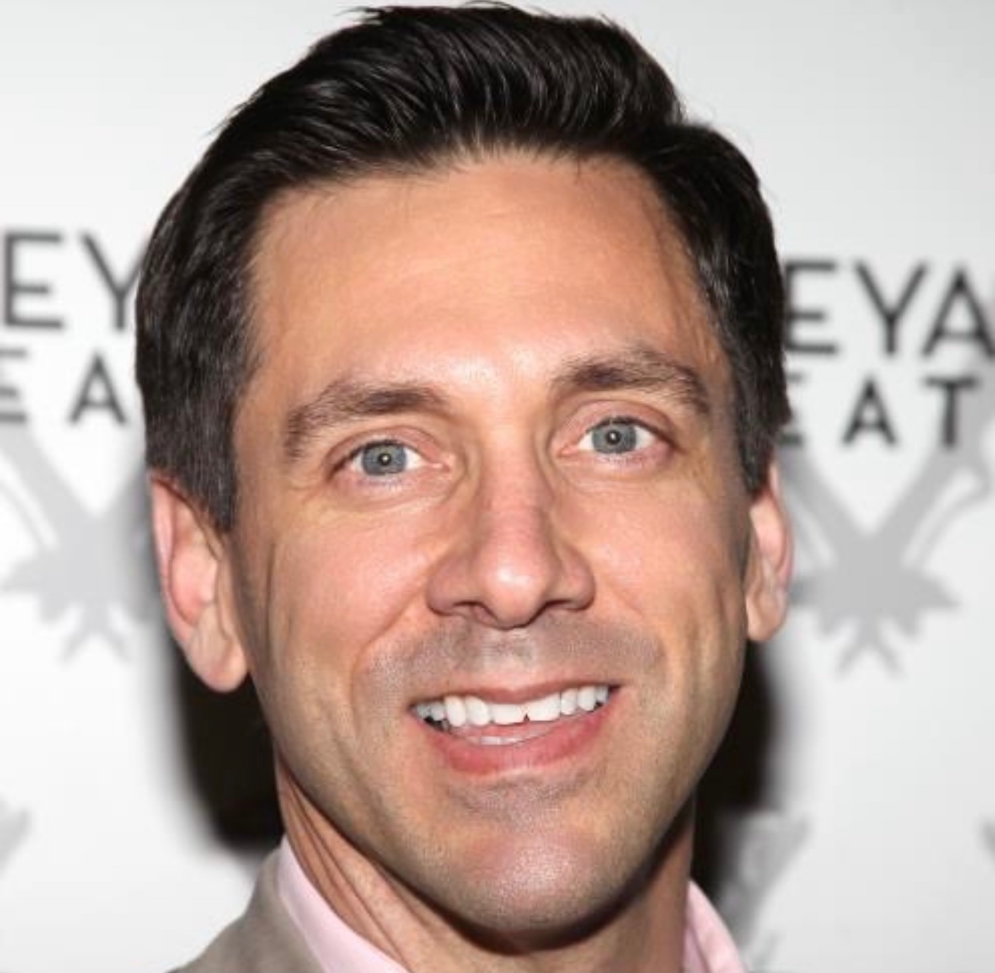 Chuck Mirarchi: What inspired you to audition for The Kids of the Kingdom?

Michael Berresse: In all honesty, the inspiration didn’t really come from me and it’s a miracle it happened at all. At 18 years old and just out of high school, I was really struggling with my identity and paralyzed about my future. I was extremely anxious socially and despite being top of my class, I
hadn’t accepted any offers for University. My parents were both in new marriages and new homes and I had no real guidance so I got a job teaching gymnastics and rented a room in my friend’s father’s house. While performing in the musical Company at the local junior college,
two of my castmates who understood my dilemma and believed in my talent basically kidnapped me and brought me to the Chicago stop of the Disney audition tour. God bless you both, Nikki Todorovich-Blowers and Jesus Perez!

MB: I had been a musician and competitive gymnast since early childhood so I had flexibility and body awareness and could read music, but my theatre career at that point began and ended with school productions. I really had no concept of what a professional audition was so I walked into this grand old arts building in Chicago with zero expectation and frankly, no clue. I came face-to-face with 700+ other auditionees crammed into the stairwells and hallways, all looking more professional and prepared than me and I wanted to bail before it began but my friends insisted. I made it through the ‘typing’ and once I danced the first of many combinations in street clothes and bare feet, something clicked. For the first time, I started to feel I belonged there. Not without plenty of faux pas, however. When I sang “Miracle of Miracles” from Fiddler on the Roof, I pulled the director (and now Disney Legend) Barnette Ricci out from behind the audition table and sang directly to her. I had no sheet music. I had no dance clothes. I honestly think my “blank slate” was part of the reason they took a chance on me. Ronnie Rodriguez, Rich Taylor, and Barnette Ricci changed my life.

In fact, 16 years later, when I was nominated for a Tony Award on Broadway, I got a note from Rich Taylor that read: “You’ve come a long way from a barefoot audition in Chicago.” I will never ever be able to repay the second chance at life that Disney gave me.

CM: What year were you part of KOTK? How long did you perform at Walt Disney World?

MB: I started at Disneyland in the summer of 1983 as the boy singer in “Fantasy Follies” at Carnation Plaza. It was a 3-month gig, but when it ended I was invited to go to WDW for another 3-month contract doing “Sparkling Christmas Spectacular.” Just as that contract was ending, two of the KOTK in “Show Biz Is” left to get their Equity cards and I was invited to be a full-time
“Kid” for the first time. Including 6 months at Tokyo Disneyland in 1986/87, I stayed as a Kid through early 1988 before leaving to get my Equity card at Pittsburgh CLO. I spent the fall of 1988 as a choreographer at WDW before moving to NYC in January of 1989.

CM: Talk about the rehearsal process.

MB: Many of the shows I performed were the original cast, so I most often had the privilege of building things from the ground up with the directors and choreographers themselves. Over the course of a couple of weeks, we’d learn the show in a rehearsal space on property (sometimes while still performing another show). With each new show and new cast, there was the question of how the individual tracks would be laid out. Usually some internal auditioning, but often just assigned based on skills and experience. There was a LOT of partnering in those shows (which I have to say is really lacking in the current climate of Broadway dance) so we spent a lot of time working on that. And once the show was ready to leave the rehearsal room, we would do overnight tech rehearsals when the park was closed. To this day, those overnighters are some of my favorite bleary-eyed memories of the parks.

“I will never ever be able to repay
the second chance at life
that Disney gave me.“

CM: When you performed, which part of the park did the shows take place in?

MB: I had the joy and privilege of performing in many different venues over the years, several of which no longer exist. First the Carnation Plaza just off Main Street at Disneyland, then the Castle Forecourt, Tomorrowland Theatre, Fantasyland Theatre, and parade route at the Magic Kingdom and for special events: the America Gardens Theatre at EPCOT, the FantaSea
cruise on the SS Norway (pre-Disney Cruise Line) and even the rooftop of the still under construction Grand Floridian Resort for the 1988 Easter Parade telecast.

CM: How many times a day did you perform?

MB: Typically, the schedule was 5 shows a day but there were times we also performed in holiday parades between shows.

CM: How many costume changes were in the show?

MB: Everything from a single costume for shows like “Fantasy Follies” to more than a dozen (lightning fast) full costume changes for “Show Biz Is.”

CM: How often did the show change?

MB: It varied from venue to venue and show to show. “Disneyland is Your Land” aka “Disney World is Your World” aka “Lands Medley” ran with basically the same music but different choreography for 14 years. I personally performed three different versions of the show (four if you count the version sung almost entirely in Japanese for Tokyo Disneyland) but that was an exception. “Show Biz Is” stayed virtually unchanged for its almost three-year run. Seasonal shows like “Sparkling Christmas Spectacular” and the “Fourth of July Special” would make small updates
each year they ran, but typically once a show was set, it would run for a couple of seasons and it was the changes in a cast that really kept it exciting and fresh.

MB: Back when I was working in Orlando, the drive to and from the park each day was through swampy bogs and miles of orange groves where there are now whole communities. There was something magical about driving through that rural Florida landscape and arriving out of seemingly nowhere at this fantastical mirage of castle spires and monorails. I’d park in the cast lot and take the shuttle bus to the Fantasyland tunnel entrance. After grabbing a bite at “Fan-C” cafeteria, I’d pick up my costumes from wardrobe. Depending on where I was performing that day, I’d head to one of several dressing rooms and get ready for the first show. There were different show schedules depending on the season and the venue but almost always five shows with or without a parade. In winter, our shows were usually earlier in the day to coincide with shorter park hours and less light, but during the summer, we would start shows a bit later so that we would still be able to perform the 10:05pm post-fireworks show on the Castle Forecourt. And if we were performing in an open-air venue, there was usually a longer gap between say 1:30 p.m. and 4:00 p.m. because it often rained and then cleared up during that window. (God bless the technicians who were mopping and drying those stages every day.)

One of my favorite things to do was sneak into the park out of costume between shows to try and catch the parade. Watching the evening Christmas Parade my first winter in Florida, usually with some sweet treat from the Main Street Confectionery, is etched into my mind as one of the happiest times of my life.

CM: Did you perform in other Disney shows other than the KOTK show?

MB: In addition to the shows I’ve already mentioned, there were NYE specials, huge new venue or new park opening events, convention shows, television specials and, other special events. I was also very fortunate to work as a park swing toward the end of my time at Disney, so sometimes I would jump from cast to cast and show to show all in one day at times.

CM: Were there other Cast Members that you performed with that went on to notable careers?

MB: Many. And not only in performance, but in education, choreography, producing and, even park management. Two of the first people I met at Disneyland were Kevin McCollum and Michele Pawk who were performing in “Show Biz Is” at the time. Michele would go on to a stellar Broadway career (including a Tony Award for Hollywood Arms) and Kevin is one of Broadway’s most prolific and successful producers (including Title of Show which I directed and choreographed on Broadway!) Deidre Lang, my partner in “Show Biz Is” became one of the In Living Color fly girls before continuing as a Broadway performer. Angie Schworer, who came to Disney for “15 Years of Magic,” has had a prolific Broadway career, and my long-time castmate Randy Wojcik did Cats on Broadway before becoming a show director and now creative director for The Walt Disney Company. Those are just a few of many.

CM: Were there any mishaps that happened on stage? (Either funny or serious.)

MB: During my time in Orlando, there was a 17-year cicada invasion. One night, we were performing “Disney World is Your World” on the Castle Forecourt stage and while Joanne Bogart was performing “I’m Wishing” as Snow White, the cicadas started zeroing in on the spotlight on her face. She daintily batted the first few away but then ran off as they started pelting her by the dozen. Eventually, there were so many thousands of cicadas on the deck that we could barely stand let alone dance among all the squashed bugs. It was hilarious and really gross.

CM: Was each performance sung live, pre-recorded, or a mixture of both?

MB: My very first show, “Fantasy Follies,” was one of the only shows that I sang and spoke live for the entire show. Most often, for the large KOTK shows there would be a combination of “click-tracked” vocals with live solos.

CM: What did you do after you left Disney?

MB: I have been extremely fortunate to have worked consistently on Broadway for over 30 years since I left Disney. I have done something like 6,500 performances in 11 Broadway shows. I have transitioned from chorus dancer to principal actor to director and choreographer. I have been able to do feature films and television. I teach. I write. I have never actually had a job outside the realm of the arts. Truthfully, I credit my time in the parks for a great deal of my success. Not only for establishing my work ethic, but also for my passionate sense of community and my great joy and appreciation for the privilege of being an artist.