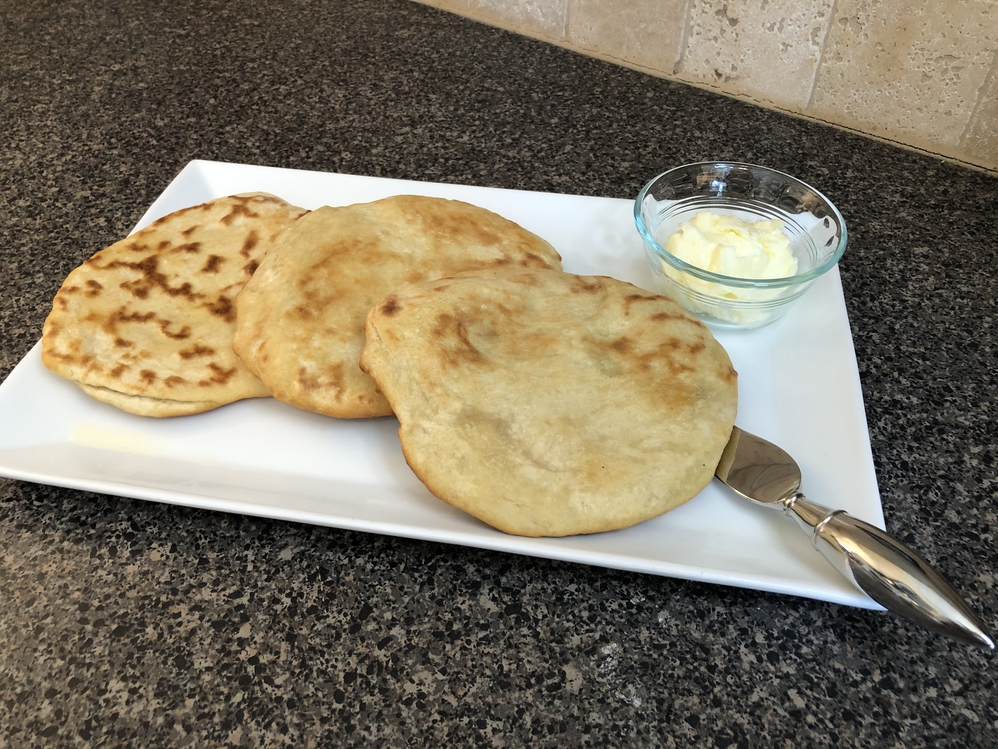 Happy Saturday, friends! I hope that your week was a good one. Let’s stop for a minute, pull up a chair, and chat. I have a confession to make: I love carbs. I love them in all their shapes and sizes and various forms, but I love fresh bread the very, very most. Just-baked bread can do no wrong. Ever.

Back before Walt Disney World’s temporary closure, my hubby and I checked Sanaa at Animal Kingdom Lodge – Kidani Village off of our list of restaurants to try. I know what you’re thinking. How could we go so long without eating at Sanaa? I know. I get it. But there are so many dining locations to try, and you just can’t do it all.

Over the years, I’d heard stories of Sanaa’s bread service, and, of course, it was one of the items that we ordered that Sunday afternoon in March. And holy cow; it was so good. The accompaniments were plentiful and each was different than the one before. It was fun to try them. But the standout was the fresh, warm Naan bread. It was soft and pillowy, and each piece was differently flavored.

So, upon discovering that the culinary team at Sanaa had released the recipe for their Naan bread back in 2014, I knew we had to make it for Saturday Snacks. Even better is the fact that I know one of the chefs listed in the Disney Parks Blog article about the recipe, and I’m friends with his wife and amazing kiddos. So, it was meant to be. Carbs, here we come.

Thankfully, while the recipe might seem complicated, it’s really not. Simple ingredients are used, and I bet that you have most of them (if not all) in your fridge and pantry right now.

Completely mix the dry ingredients together and set the mixer aside for a bit. We’ll come back to it in just a few.

Grab a bowl out of the cabinet and toss in 1/2 cup milk, 2/3 cup warm water, and 1 tablespoon of canola oil. I used skim milk in the recipe as it’s just what we use ’round here, but I’m sure that you’ll be fine whichever milk you choose to use.

Turn on your mixer to a stir setting and slowly pour in the wet ingredients. After the ingredients begin to clump like you’d expect dough to do, stop the mixer.

This is the point at which the recipe asks us to take the paddle attachment off of the mixer and replace it with the dough hook attachment. Friends, I own a dough hook attachment. It came with my stand mixer lo those sixteen years ago. That being said, I have not laid eyes on my dough hook in seven years. Not since we made the move from Maryland to Florida have I seen that thing, and I think it’s most likely living a happy life in a box in my garage. Am I about to tear apart my garage for a stand mixer attachment? No, I am not. We here at Saturday Snacks aren’t looking to make or clean up any big messes this weekend. I would make do with what I had. And it turns out that using the paddle was just fine.

Turn the mixer back on and gently let the dough continue to combine. Don’t let it over mix; just a minute or less is all you need.

At this point, place the dough into a bowl (or keep it in the stand mixer bowl), cover the bowl with plastic wrap, and place it to the side. This is the point at which we’ll need a bit of patience. The dough needs to rest for an hour. Which means we can grab another cup of tea. Or a power nap.

We’re not completely out of a job during the hour that the dough is resting. Before we place the dough in the oven, it needs to preheat to 500 degrees, and then hang out at 500 degrees for 30 minutes before the dough goes into the oven. Now’s the perfect time to get your oven up to temp.

Another thing that the recipe calls for at this point is a pizza stone. I have two that I haven’t used in years, so I grabbed one out and gave it a good scrubbing. Carefully place the pizza stone in the oven while it gets good and hot during those 30 minutes.

After the dough has rested for an hour, it’s time to sprinkle a bit of flour on the counter and divide the dough into 5 equal dough balls.

I own a rolling pin. I promise. Have I any earthly idea where that rolling pin is right now? No. No, I do not. I think it’s likely living a good life in a box in my garage with my dough hook. Sigh…we’re gonna need to get creative in order to roll the dough out.

As I stood there staring up at the contents of my kitchen cabinets, my eyes came across my Tervis-like cups. Hmmm...they could work as a replacement for a rolling pin, right? I grabbed my Pandora – World of Avatar cup off of the top shelf and gave it a whirl. It worked perfectly! That was a huge “use what you have” happy dance moment.

Roll the dough balls out into 8-inch circles on a floured surface. I flipped the dough over as I rolled to ensure that both sides were coated with flour and that there was no sticking.

This is the perfect time to go ahead and melt your 4 tablespoons of butter so that it’s ready to go once the hot bread comes out of the oven. We don’t want to waste any time getting that yummy bread slathered in butter, after all.

Now it’s time for the fun. Please be super careful as you place one circle of dough onto the pizza stone in your incredibly hot oven. This isn’t for the faint of heart; please be careful. Gently open the oven, and quickly place a dough round onto the stone.

Hit a timer for 2 minutes, and stay close. The recipe warns us that the Naan bread will burn easily, and we don’t want this whole thing to end with burned bread. Nope. Not on our watch.

Grab a set of tongs, and, once the bread is golden brown and puffy, pull it out of the oven. Give the bread a nice coating of melted butter, and toss the next dough round into the oven. Look at you! You’re baking Naan bread!

Et, voilà! The underside of the Naan bread is even prettier than the top. The recipe provides 5 glorious, warm, fresh loaves of Naan bread. Please stand there and marvel for just a minute at what you’ve accomplished. This is nothing to sneeze at, and you just did it.

The Naan bread is soft in the middle with fabulous air pocket bubbles, and it’s toasty on the outside. The melted butter soaks right into the bread, and you’ll want to stand at your counter and eat it all.

Of course, when you have fresh bread, you need butter, right? It’s kind of like If You Give a Mouse a Cookie. One leads to the other. I knew that fresh butter would be just the thing to have with our fresh bread.

To make butter, you’ll need half a mason jar worth of heavy whipping cream (aka magic in a carton), and some coarse salt.

Shake and shake and shake the mason jar for 15 to 20 minutes (you get fresh butter and an arm workout) until the liquid separates from the solid.

Pour off the liquid, shake the solid a bit more, and pour off the rest.

The solid goes into a little bowl, gets sprinkled and mixed with the coarse salt, and then gets slathered onto the Naan bread that you just made from scratch.

If you listen closely enough, you might be able to hear angels singing as you butter that bread.

Friends, this was so much fun to make. And I’m sure that there are a million ways to make it even yummier. You could drizzle the bread with olive oil, or rip it and dip it in hummus, or make a cool and creamy dip using sour cream or plain yogurt as the base, etc. The possibilities are endless.

What Disney recipes are you making these days? Have you baked Sanaa’s Naan bread before? What else could we pair with our bread? Let me know in the comments below. Have a wonderful weekend!

Ready to get baking? Sanaa’s Naan bread recipe is below: