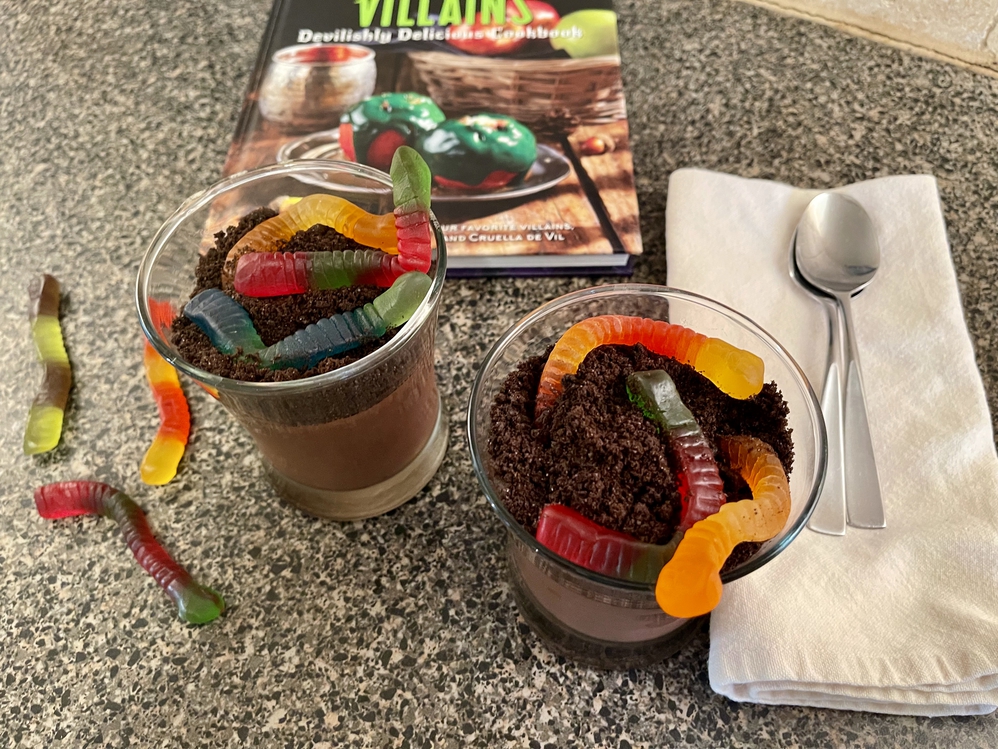 I’m not exactly sure why it is that I love the simple dessert known as Worms and Dirt very so much. Perhaps it’s my deep and abiding love for all things gummy worms/bears/whatevers and chocolate, and the fact that it just looks like a bowl full of fun. And today’s snack is just that: a bowl full of fun.

Since Halloween is right around the corner, it only made sense that you and I would turn our attention to the Disney Villains Devilishly Delicious Cookbook for assistance with this week’s Saturday Snacks recipe. In fact, not only will we turn to the Disney villains for today’s recipe, but since next Saturday is the day before Halloween, I figured that we could glean next weekend’s recipe from them as well. It’ll be our very own miniseries of sorts. Without the high-stakes drama and intrigue, of course. Well, hopefully. Ahem.

The history of Worms and Dirt or Worms n’ Dirt or Dirt Cake, as some call it, isn’t an incredibly old one. The dish arrived on potluck tables in the 1990s, and grew in popularity as the Jell-O company embraced it. Of course, you and I could use Jell-O chocolate pudding in order to make today’s dessert, but that just wouldn’t be making the dish the way that Disney would like us to. We are going to make chocolate pudding from scratch, and thankfully, it’s easier to do than you might think. And you and I will savor every moment of channeling our inner child. Brightly colored gummy worms? Check! Crushed Oreos? Check! Bittersweet chocolate chips? Double check!

We start things off today by placing a large saucepan on the stove top. Into that pan I placed 1/2 cup of granulated sugar, 1/4 cup of cocoa powder, 3 tablespoons of cornstarch, and 1/4 of a teaspoon of salt.

Before I started bringing the chocolate mixture on the stove top up to a simmer using medium-high heat, I stopped and measured out 4 ounces of bittersweet chocolate chips using my handy-dandy kitchen scale. If you don’t have one of these little babies, I highly recommend them. They just make things so much easier when it comes to weighing out ingredients. You can absolutely eyeball things, approximating ounces based on the total ounces of whatever’s in the bag, but a kitchen scale really leaves little up for debate. Four ounces is four ounces. And, if you’re like me and you put in just a little bit over four ounces and you end up having to take a few of those bittersweet chocolate chips off of the scale, be sure that you place them directly into your mouth. It’s the only logical thing to do.

I brought the chocolate mixture in my saucepan up to a simmer over medium heat. I actually went for more of a medium heat than a medium-high heat because I didn’t want anything to get too out of hand. I really liked how it came up to temp in a more gentle fashion.

Once the mixture started simmering, I hit the timer for three minutes and whisked it, as the recipe asks, constantly. You don’t want anything to stick to the bottom of the pan, and the mixture will actually start to pop and bubble, so the whisking helps get two birds with one stone.

The picture in the cookbook shows the Bowl of Worms in, well, a bowl, but I think that part of the fun of worms and dirt is seeing the striations of chocolate pudding and cookie crumb topping, so I wanted to put it in clear containers in this instance. I only had two of the matching glasses, so I turned to my handy-dandy 6-ounce ramekins to hold the rest of the pudding.

The recipe now asks that you and I cover the containers filled with pudding with plastic wrap. Instead of simply covering the top of the container, we need to make sure that the plastic wrap comes in contact with the surface of the pudding to prevent it from forming a skin. Air will turn your pudding into anything but creamy and delicious. And what a disappointment that would be.

I carefully tore off pieces of plastic wrap and made sure that the plastic wrap pieces rested on the surface of the pudding in each of the containers. I then set my new Remy kitchen timer (my husband is the sweetest) for an hour and popped all of the pudding-filled ramekins and glasses into the refrigerator.

While the pudding was in the fridge, I turned my attention to the cookie crumb topping. The recipe suggests that we either use 12 chocolate sandwich cookies or 24 chocolate cookie wafers. Either way, they’re to be crushed. This is the “dirt” in worms and dirt. I decided to go with Oreos for today’s recipe. I counted out 12 of them, and using my offset spatula, scraped out the cream filling from the middle of each one. And yes, if you’re wondering if you should taste some of that cream filling, the answer is yes. It’s always yes.

I placed the 12 filling-less cookie sandwiches into a plastic baggie and then began to crush the cookies using the handle of a butter knife. Of course, you could also use a food processor or whatever else is on hand. I ended up transferring the crumbs into a thicker baggie and then ultimately used my Pampered Chef food chopper to finish off the job. And don’t forget that you’re in control here; you can crush the cookies as much or as little as you’d like.

Can we talk gummy worms for just a second? The cookbook, while calling for gummy worms, clearly shows Trolli’s Sour Brite Crawlers as the go-to for the cookbook’s glossy and colorful picture. And while those Sour Brite worms are beautiful, they are not your typical gummy worms. At least not in my mind.

Yes, an occasional Sour Brite Crawler is good, but when we’re talking Worms and Dirt, it’s those big, slightly translucent gummy worms or bust. The Sour Brite Crawlers might be cute for a photo shoot, but the worm for the job is always going to be the classic original. But that’s just my opinion. If you’d rather use Trolli’s version, go for it. It’s going to be great either way, I’m sure.

When the hour was up, my containers of pudding were still slightly warm. I ended up leaving them in there for an extra hour or so, which definitely wasn’t a bad thing. You want the pudding to be nice and chilled, after all.

After time in the fridge, it’s time to add the dirt to the top of your pudding. You get to put as much or as little of those crushed chocolate cookies on top of that glorious chocolate pudding. I, as a lifelong chocolate lover, put quite a bit on each of my pudding cups.

The recipe calls for us to use 18 gummy worms (how cute is it that they give us an exact number of gummy worms?) to decorate our pudding cups. Again, you do you. Want more gummy worms? Heap them on there. Have them coming out of the dirt, have them here, have them there, have them everywhere. If the gummy worms are more decoration to you than anything, one simple worm will do.

The last thing to do is to take a spoon to your Hades’ Bowl of Worms and enjoy. And friends, enjoy I did. The creamy and cool chocolate pudding was delicious. Because we used different chocolates (cocoa powder and bittersweet chocolate chips), the chocolate pudding had a really nice depth to it. And all that heavy whipping cream and whole milk? Ain’t nothing bad coming from that. So creamy and so good. It’s the best chocolate pudding that I’ve ever had. No joke.

This dessert is absolutely perfect for Halloween, and if you’ve got kids in your house for the big night, they are going to love getting to construct these pudding cups. Who doesn’t love a great worms and dirt treat?

If you’ll be on Walt Disney World property in the days ahead, you can find a Worms in Dirt Cake at Disney’s Contempo Café. Though I’ve not had it myself, in my mind, the bakery team at the Contempo Café can do no wrong, so I have great faith that it’s absolutely delicious.

However and whenever you enjoy the snack, have a blast putting it together and gobbling it up. And if you choose to make it, please let me know what you think. It’s a simple Disney recipe that produces delicious results. And nothing’s better than that on a fall weekend.

I hope that you have a great couple of days and that whatever you do, find a way to work a little bit (or a whole lot) of fun into your weekend. Happy early Halloween, everyone!

Ready to give Hades’ Bowl of Worms Pudding a try? The recipe is below:

When Hades sets up Hercules to battle a fearsome Hydra, he makes sure to get a snack to enjoy during the show. What else would the resentful god find suitable for such an occasion than a bowl of fresh worms?

If you aren’t the god of the underworld, this Bowl of Worms has more appeal than the one from the movie. Rich chocolate pudding is topped with cookie crumble “dirt” and candy “worms,” to enjoy the next time you watch a demigod defeat a mythic monster-or just for dessert after a nice dinner.