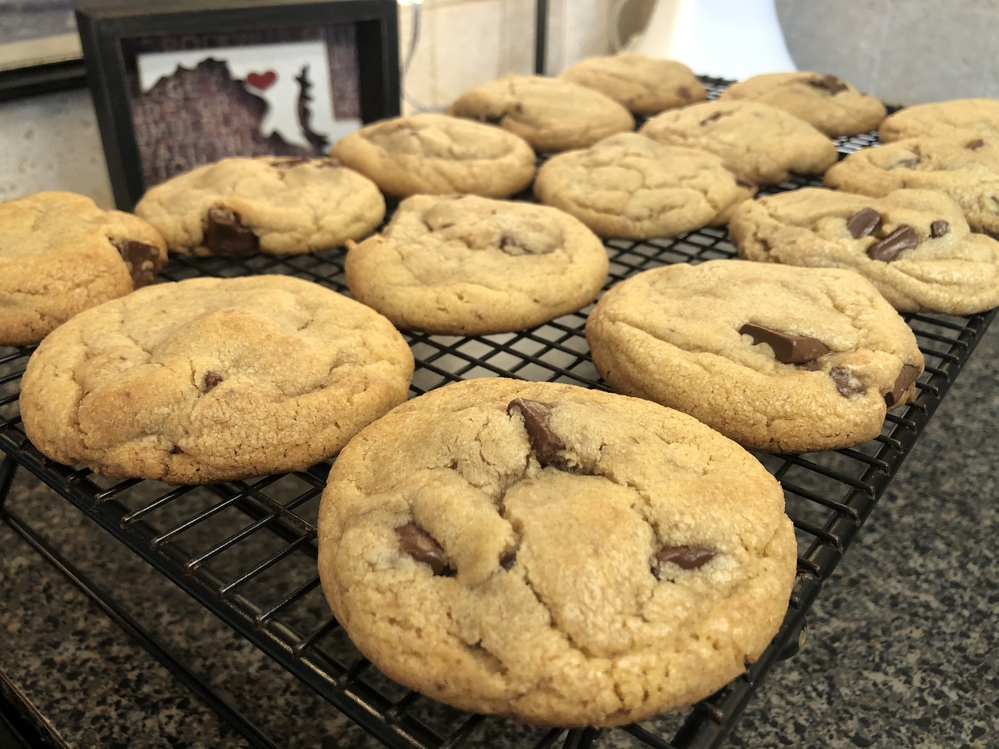 Friends, I must confess that, as I sit here and write these words, I have yet to eat breakfast, but I have eaten one of the cookies we’ll be baking today. So, perhaps I’ll just be eating chocolate chip cookies for breakfast today. We’re grown ups, so we can do that, right? Ahem.

Our latest submission in the category of “We’re Not Messing Around” is today’s Saturday Snacks recipe. Friends, gather ’round. We’re making Jack-Jack’s Num Num Cookies.

These massive (and INCREDIBLE) cookies hail originally from Pixar Pier in Disney California Adventure, and, in a move that caused quite a hallelujah from me, the cookies also made their way to Disney’s Hollywood Studios last year.

In my opinion, a large element that makes these cookies unique is that they’re baked in cookie cups, making them thick. Not only are the cookies thick, they’re huge. Like I was good to eat just one huge.

At first, I was hesitant to try to recreate these iconic cookies at home, but if Pixar’s going to release the recipe, they must feel that it can be done. We can do it!

As you know, I don’t usually make alterations to the Saturday Snacks recipes. I make ’em as they come. We will, however, be making an adjustment to today’s recipe. Jack-Jack’s Num Num Cookies, in the parks, are made with chocolate chunks, and not chocolate chips. The recipe released by Pixar says to use chocolate chips. Today, we must politely decline said chips. We will be using chocolate chunks. Again, we’re not messing around.

Jack-Jack’s cookies begin with a step that we’ve not covered here in the Saturday Snacks realm of things, and, to be honest, it’s a technique I’ve never done in all my days of baking. Today, we will be browning butter. You might be tempted to think that this step can be skipped, and while you could skip it, I would ask that you not. It’s easy (I promise), and it adds a depth of flavor that I didn’t see coming. It makes such a difference.

We’ve all heard chefs and bakers and everyone in between talk about the magic of brown butter. Now that I have indeed browned butter, I can attest that it’s magic and pixie dust all rolled into one.

First things first: grab two sticks of butter and set them out on your counter to warm up just a bit. I looked to sallysbakingaddiction.com for advice in the brown butter department, and Sally said that if your butter is too cold, it could splatter. As we’re not looking to do any extra cleaning this weekend, we’ll make sure the butter’s not too cold. Fifteen minutes on your kitchen counter should do the trick.

Cut the two sticks of butter into slices, and place the slices in a pan over medium heat. Sally suggests using a light colored pan so that you can see how brown the butter gets.

Stir, stir, stir. And stir some more. After melting, the butter will begin to bubble. Keep stirring.

The butter will taken on a golden color, and brown bits will begin to appear.

The recipe calls for the butter to cool to the point that it begins to solidify. While my butter did cool down, it never really began to solidify, but that was a-okay. Once your butter feels cool to the touch, stick a finger or the back of a spoon in there and take a taste. I’m so glad that I did. I thought I knew what butter tasted like, but brown butter is just that much better.

Pour your cooled brown butter into a bowl (or the bowl of a stand mixer), along with 1 ¼ cup of brown sugar and ¼ cup of granulated sugar. The recipe calls for a teaspoon of sea salt to be tossed in as well.

Cream the whole thing until it takes on a lighter color and fluffier texture. See how different this mixture looks when you’re using brown butter and a larger amount of brown sugar?

This step took much longer than it has for other cookie recipes we’ve made on Saturdays in the past. Hang in there. It’ll happen. Think happy thoughts.

Once the mixture reaches the desired color and texture, add in an egg, an egg yolk, and a teaspoon of vanilla.

Mix until the ingredients are completely combined.

In a separate bowl, combine 2 ¼ cups of flour and a teaspoon of baking soda.

Add the flour and baking soda to the wet ingredients just a bit at a time in order to avoid a cascading cloud of flour. Again, we’re not looking to add to our weekend chores, right? Mix everything until it’s combined.

And now (sound the trumpets), it’s time to add the chocolate chunks. Sprinkle in a cup of the chunks, and mix them into the dough. And sprinkle at least three of them into your mouth.

The recipe now calls for us to scoop the dough onto baking sheets and place the sheets into the fridge for at least an hour, or preferably, overnight. Now you and I both know that when it comes to letting cookie dough chill, patience isn’t my strongest virtue. If I was making these cookies for just my hubby and I, I would let that dough chill for exactly 60 minutes and not a minute longer. But, for Saturday Snacks, since the recipe states that overnight would be preferable, I decided to let the dough chill overnight. Ohhh, the willpower this step took.

Rather than place the balls of dough onto baking sheets and then trying to cram those sheets into the fridge, I decided to scoop the dough out and place the dough balls into an airtight container. I placed parchment paper between the layers of dough to make sure they didn’t stick together, and placed the container into the fridge.

A note: I made the dough balls big. The in-park Num Num cookies are ginormous, so I wanted ours to be on the bigger side.

After the dough has chilled to your liking, preheat your oven to 350 degrees, and place the dough onto baking sheets, making sure to given them plenty of space to spread during the baking process. I also decided to place a couple of them into cupcake liners, thinking that they’d be a hair closer to what they are in the Disney parks. I was interested in comparing the two methods, and seeing if I preferred one over the other.

The cookies baked in the cupcake liners came out nicely.

They were thick, and while they are smaller than the ones offered in the parks, it was fun to come close to replicating the original.

These cookies are next level. Big time. The brown butter adds a noticeable richness and depth to the overall flavor of the cookies. The cookies are thick, and the chocolate chunks melted beautifully. The taste of the cookie is the almost the same as the one that I enjoyed last January in Hollywood Studios. No joke; this recipe is this close to spot on.

If I were to make a change to get the recipe a tick closer to the original, I would reduce the salt by at least half. At first, when the sea salt hits your taste buds, it provides a pleasant and unexpected bright note. After a bit, the salt content makes the cookies taste a bit too, well, salty. I’m thinking that using just half or a quarter of a teaspoon will do the trick.

And now, I’m sitting here trying to talk myself into eating a banana before eating another Num Num cookie. Spoiler alert: I’m thinking that the cookie’s gonna win.

Have a super Saturday, friends!

Ready to make your own incredible Jack-Jack’s Num Num Cookies? The recipe is below:

Brown the butter and let it cool until it begins to solidify.
Cream butter, sugars and salt in a mixing bowl until light and fluffy.
Mix in whole egg, egg yolk, and vanilla.
Combine dry ingredients and mix into the batter.
Add chocolate chips.
Scoop into balls and chill thoroughly for at least an hour, preferably overnight.
Bake 350 degrees for 7-10 minutes until golden brown on edges, but still soft in the center.