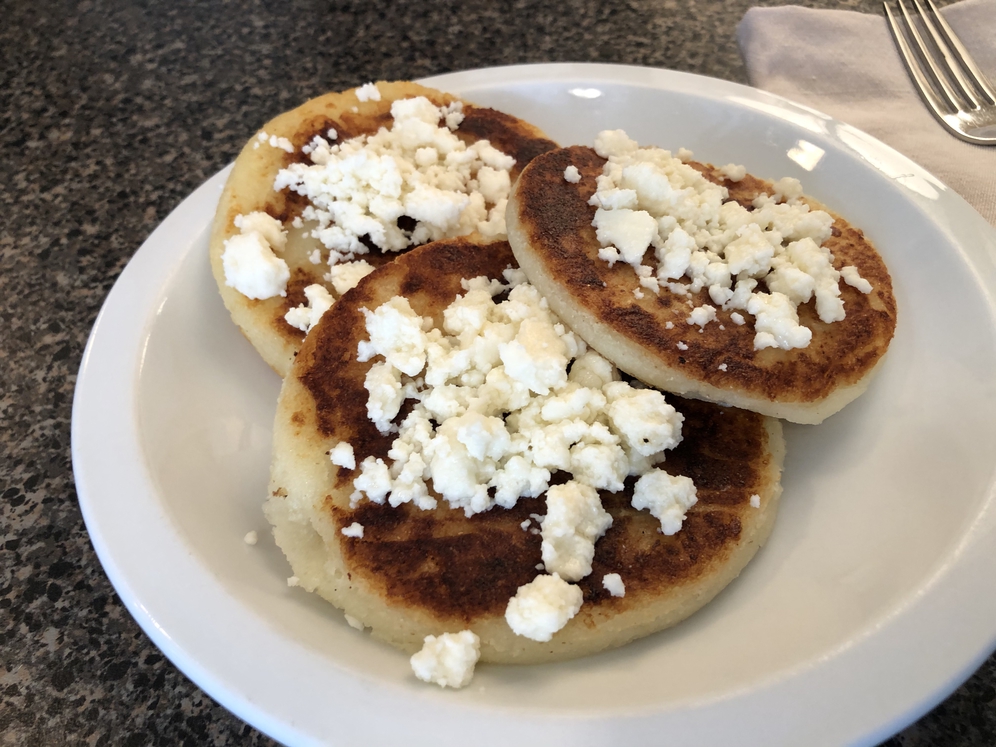 Dear friends, I’d like to submit our latest installment in the bread-and-cheese-is-all-you-need category. Well, bread and cheese and chocolate, that is. Today, I give you EPCOT’s Corn and Cheese Arepas.

According to the EPCOT Food & Wine Festival cookbook loaned to me by my husband’s wonderful coworker, Lilly, the Corn and Cheese Arepas made their way onto the EPCOT festival scene in 2009 at the Chile booth.

I tried the one of the latest versions of the arepas at the Feast of the Three Kings Holiday Kitchen at last year’s Epcot International Festival of the Holidays. Last year’s arepas (pictured above) were topped with melted queso fresco. Unfortunately, while the arepas were okay, they weren’t as hot as they should’ve been, probably due to the fact that so many needed to be made in advance and kept warm until guests ordered them. There’s just only so much you can do in that instance, and, when I came across the recipe, I figured that you and I might be able to rectify that situation. Cue the Six Million Dollar Man intro: we can rebuild {the arepa}…we have the technology…

Today’s recipe required a trip to the grocery store for a few ingredients that I didn’t have on hand. Masarepa, a precooked white corn meal, was top of the grocery list. While I’ve used corn meal for cooking up things like fried shrimp before, I had never used masarepa. We used queso fresco three weeks ago for our Pao de Queijo, but we’d be using queso blanco today, so that was also on the list as well. Like queso fresco, queso blanco is a salty, semi-soft cheese that crumbles easily, but queso blanco is definitely a drier cheese than queso fresco.

Our first step is to bring 1 1/2 cups of milk to a simmer over medium heat.

After my recent experience letting the cream for Be Our Guest’s Triple Chocolate Cupcakes boil way too much, I stayed on the low side of things and watched that pan of milk closely.

While the milk is heating up, dice up your 4 tablespoons of unsalted butter. You’ll toss it into the hot milk once it reaches a simmer.

Once the milk started to simmer, I pulled it off the heat and stirred in the diced butter. Once the butter is melted and the two are combined, you can set the pan aside.

We’ll now turn our attention to the dry ingredients. Grab a large bowl out of the cabinet, and toss in 1 1/2 cups of masarepa. Add in 1 teaspoon of coarse salt (side note: buy one box of coarse salt, and it’ll take you quite some time to churn through it…it’s so nice to always have on hand if you need it).

To the salt and masarepa, add 1 1/2 tablespoons of sugar.

Top the dry ingredients off with 1 cup of shredded mozzarella cheese, and mix everything up.

Using a large spoon, make a well in the middle of the dry ingredients. Don’t stress too much here; like we’ve done with other Saturday Snacks, we just want a landing spot for the wet ingredients when we add them.

Once you’ve made a well in the dry ingredients, pour the milk/butter mixture slowly into the well.

Begin stirring to combine all of the ingredients.

Before you know it, a dough will begin to form.

You can add the remaining 1/2 of milk to the dough if it’s needed to get it to the point where it’s smooth. I needed much less than the half a cup, and I added just a little bit of milk at a time.

And, with all things dough, your hands are your best kitchen tool. Get in there and knead that dough. Channel your inner Playdoh-loving preschooler.

The recipe now calls for us sandwich the dough between two sheets of parchment paper and roll it out.

As I’ve mentioned in the past, my rolling pin has been missing in action for 7 years. Bless its heart. My Ratatouille cup pinched hit for the rolling pin, and did a fantastic job.

We’re asked to roll the dough out to a thickness of half an inch. On my first go at rolling at the dough, I got things a little too thin. I mushed (technical term) the dough back together and re-rolled it, this time getting it right at half an inch.

The next step called for a bit of additional creativity. We’re asked to cut out the arepas using a 3-inch circle cutter. Since I’m 3-inch circle cutterless, I began scheming about what I could use instead. When I was mentally thinking through the items in my kitchen, the lid of a wide-mouth mason jar came to mind. Just such a mason jar sits on my counter each day and faithfully holds the sugar for my morning tea.

I ran upstairs and grabbed my trusty 1996 AFC ruler, and sure enough, the lid was just over 3 inches across.

I figured we’d be fine with slightly larger arepas, and I scrubbed up the mason jar lid to prep it for use.

Using a 3-inch circle cutter, or a wide-mouth mason jar lid, or anything that you can get your hands on that comes close, cut out 8 to 10 arepas from the dough, re-rolling as needed.

The jar lid worked wonderfully, and pushing the dough out of the lid was easy.

By rolling and re-rolling the dough, I was able to cut out 8 arepas. Once I had used all of the dough, I turned my attention to my cast iron skillet.

At this point, the recipe calls for us to brush our skillet or griddle with vegetable oil. After doing that, we’re to heat our skillet over medium heat. If I’m being honest, I went about prepping my cast iron skillet with a bit of fear and trepidation.

While your pan is heating, crumble 1 1/4 cups of queso blanco using a fork, or your best kitchen tools: your hands. I ended up using nowhere near a cup and a quarter of the cheese, so you could always crumble it as needed if you wanted to.

The first three arepas went into my cast iron pan, and, as the recipe calls for, I gave them time to start browning, heating, and crisping. I knew it could take 5 minutes or so on each side, so I waited and peeked and tried not to worry.

But, unfortunately, when I turned them over, they were looking just a bit too done on some parts and not nearly done enough on others. Time to call in the ringer: my trusty non-stick pan.

I oiled the pan up, and even played around with adding more oil to see what the end results would be. The arepas cooked in the pan turned out much closer to what I had seen in the park.

The last two arepas were the closest, and I now know to add just a bit more than a brushing of oil and to keep the heat (at least with my stove) just lower than medium to get the desired results.

As your arepas finish cooking, transfer them to a plate lined with paper towels and cover the plate with foil. When you’re ready to try the warm, cheesy arepas, top them with some (and by some, I mean a lot) of that freshly crumbled queso blanco.

And savor that first bite. I enjoyed the homemade, still hot from the pan arepas much more than what I had in EPCOT last year. It only makes sense, right? While it was fun trying an arepas in the park, it was infinitely more fun to make them at home and try them while they were still hot.

Ahhh, the magic of bread and cheese. The arepas are warm and soft on the inside and toasty on the outside. You can pick up on the shredded mozzarella, and the sugar and coarse salt help the arepas to have added depth.

And, I can confirm that the arepas can be reheated the next day in a pan, topped off with more of the salty queso blanco, and served up as part of a quick lunch or an afternoon snack.

Have you tried to recreate a Disney recipe in your kitchen recently? Please let me know if you have. And, if you’re looking for something toasty, cheesy, and warm to try this fall season, I highly recommend the Corn and Cheese Arepas. If you give them a try, let me know.

Have a great weekend, everyone. Savor a snack, sip of cup of something hot, and enjoy the changing world outside your window.

Ready to give the arepas a try? The recipe is below: