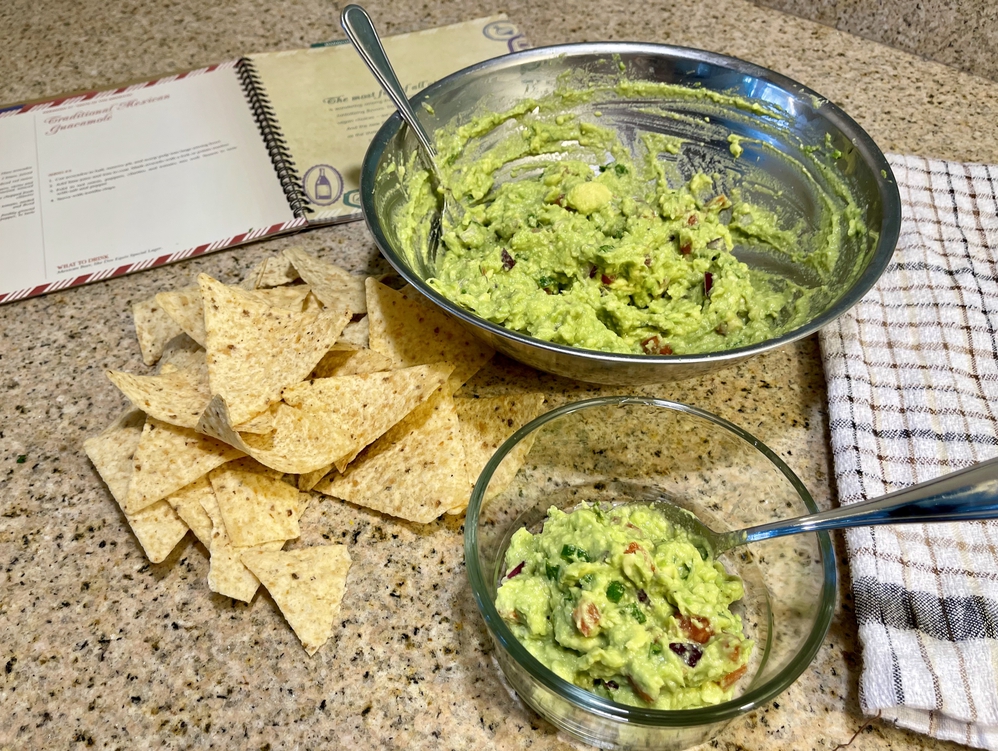 Friends, I am channeling Rafiki at the beginning of The Lion King today. Except instead of holding up a small baby lion, I am holding up a not-so-small bowl of guacamole. Guacamole that I made with my OWN TWO HANDS. And I’m holding it high in the air for all to see. While the first lines of Circle of Life play in the distance, of course.

During the pandemic, a short list of items became necessary to me personally: heavy whipping cream, having a large bag of mini York Peppermint Patties on hand at all times, an ever-present jar of instant espresso in my cabinet, and guacamole. And I’m not talking about fancy guacamole; Chipotle’s guacamole would do. In fact, I favor Chipotle’s guacamole over others that I’ve tried.

I never liked guacamole before last year. I would see it and would equate it with a mushy cold avocado and would never be tempted by it. Now? Now it is my friend. And today? Today, I now know how it easy it is to make and enjoy. We need very few ingredients to make such magic in our own kitchens. And the fact that it is a Walt Disney World recipe makes this guacamole even better than all the others.

As I explained two Saturdays ago, I have been given the challenge from Pete to create Saturday Snacks recipes in a DVC villa using, for the most part, only the kitchen items that come standard with the unit. As I mentioned two Saturdays ago, I did bring my own measuring cups and measuring spoons along for the ride. I figured that they would be easy to fit in a suitcase if I happened to be flying in from somewhere else, and they gave me quite a bit of comfort in the midst of trying to cook and bake in what felt like someone else’s kitchen.

Today’s guacamole recipe comes from the 2012 EPCOT International Food and Wine Festival Cookbook. The recipe itself hails from Disney Springs’ Paradiso 37, so I’m not exactly sure why it’s in the EPCOT cookbook, but perhaps some of the Walt Disney World restaurants were featured in the park during the festival. I chose the recipe because it looked easy enough to make in a DVC villa, and I was intrigued by the idea of making my own guacamole. I had no idea how amazing it really was going to be.

All of the ingredients for today’s guacamole are readily accessible at a grocery store. When my four Hass avocados arrived via Instacart, I put them, along with the Serrano pepper and the Roma tomato, into the fridge. After a quick conversation with Jackie and Craig, it became apparent that those avocados should not see the light of the inside of my refrigerator. Rats. Because I had put them into the fridge, it was likely that I would now have brown guacamole. Friends, brown guacamole will never do for Saturday Snacks. I went to the grocery store the next day to hunt down four additional avocados.

This is where I would like to again say a hearty God bless the Publix produce section team members. They are the salt of the earth. I stood there in front of the avocados not knowing exactly what a good avocado looks like, and I turned to the produce team member standing to my right and asked him what I should be looking for. He explained that avocados that are brownish on the outside are actually what is needed. You and I also need them to be slightly soft. He helped me pick four perfect Hass avocados, and I rolled out of the store.

The best thing to do at the beginning of this recipe is to do a mis en place, which I stopped and took the time to do. A miracle, I know. It’s not something I always want to do, but I was in the middle of making something for which I had no frame of reference, so I figured it would be a good thing. I washed the items that need it, and sliced, diced and chopped them and put them aside.

As you might expect, Disney Vacation Club villas do not come with a citrus reamer. I squeezed the limes by hand.

When it comes to slicing a Serrano pepper, be careful. It might be a good idea to wear gloves if you have them on hand. I’ve chopped them twice now without gloves, and I don’t think I’ll do it again. I washed the Serrano pepper, cut off the stem, and scooped out the seeds. I then diced it as finely as I could. While the recipe calls for one or two, and I actually ordered two from Instacart, only one arrived. And it turned out that only one was needed. In fact, after making it the guac a second time, I will likely hold it to half of a Serrano pepper in the future. If you like a kick, throw the whole thing in. If not, hold back just a bit.

You won’t need to dice the entire red onion, which your cryin’ eyes will thank you for. I diced a 1/4 cup and wrapped the rest and stuck it in the fridge.

I washed up my Roma tomato, sliced it and scooped out the seeds. I diced it into small pieces and set it aside.

I next washed a bit of cilantro (remember that you only need 1 tablespoon) and chopped the cilantro as finely as I could.

Next came the avocados. I’ve always heard that avocados are tricky to work with.

I knew that you could slam a knife into the pit of an avocado to get it out, but my avocados were so nice and ripe that the pits popped right out. I then scooped the avocado out of its skin, one half at a time.

The next part requires a bit of elbow grease. You and I are to pour in the lime juice and mash the avocado, which can be a little easier said than done. Just keep at it.

Add the 1/4 cup of red onion, one or two minced Serrano peppers, the diced Roma tomato, and a sprinkling of course salt and freshly ground pepper into the bowl.

Mix everything until completely combined, and stand back. You’re done. It’s just that simple and just that easy, and you’ve made Paradiso 37’s guacamole. Give yourself a high five.

Friends, when I tell you that I dunked the first tortilla chip into the guacamole, tasted it and did a happy dance, picture me doing an all-out dance like no one’s watching dance. Except there were actually people watching: Fiasco and Drake. But I didn’t even care. This guacamole was that good.

And those guys that I just mentioned? Yep, they loved the guacamole, too. I was so proud of myself for making my own guacamole. I couldn’t believe that I had actually done it. And you can do it, too.

If you make the guacamole, please let me know what you think. For me? And my family on Thanksgiving? And Drake and Fiasco? It was a resounding hit. And it was so easy. In my mind, it’s the perfect snack for a holiday weekend.

I hope that your Thanksgiving was a wonderful one, and that your weekend is filled with all the best. We’re officially in the holidays now, friends. And we’re going to make it through together. May there be moments of Disney magic, like Paradiso 37’s guacamole, found throughout the next two days. Have a great weekend, everyone!

If you’d like to watch the video of me making the guacamole, tune in below:

Ready to try your hand at Paradiso 37’s Traditional Mexican Guacamole? The recipe is below: