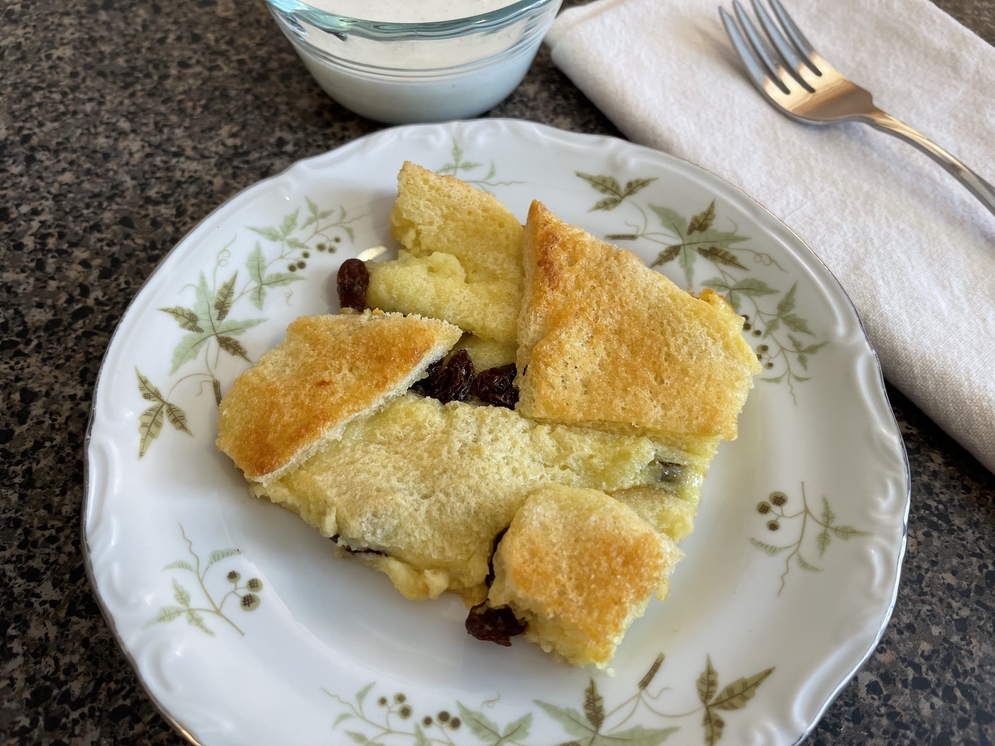 Top o' the morning to you, Saturday Snacks friends! I hope that your day has started off well, and, with a little luck o' the Irish, I'm hoping that it gets even better! Not only is it just a few days after St. Patrick's Day, today is also International Happiness Day and the first day of Spring! I don't know about you, but Disney snacks and desserts bring me a whole lot of springtime happiness.

Today, we're going to turn our snacking attention to the Walt Disney World epicenter of all things Irish: Raglan Road. This restaurant can be found in The Landing at Disney Springs, diagonally across from the cookie darling that is Gideon's Bakehouse. Raglan Road is a fun and lively dining experience, and is one that I'd recommend if you're looking to work a different dining location into your next trip to the Magic.

Today, in honor of St. Patrick's Day, we'll be inviting some of Raglan Road's most loved dessert magic into our kitchens as we make their Bread and Butter Pudding. Grab a loaf of bread, and let's get to it!

Well, before we get to it, we need to clarify exactly what the difference is between bread pudding, and bread and butter pudding. Thanks to the internet, I discovered that the difference is quite simple: bread pudding is dense and is made of stale bread that is combined with milk and sugar, while bread and butter pudding is more of a, well, pudding consistency and is softer due to the custard with which it's made.

The ingredients list from the recipe found in Chef Mickey - Treasures from the Vault & Delicious New Favorites will have us picking up that loaf of bread, along with some raisins, whole milk, and salted butter. You'll want to grab 4 eggs out of the fridge and, if you keep heavy cream in the fridge at all times like I do (I blame it on the pandemic), you'll need to grab that, too. Half of a cup of granulated sugar tops off the list.

The recipe calls for a 7x11-inch ovenproof dish. While I had a dish that was cuter, it's taller and smaller, which made me nervous that the pudding wouldn't bake through properly. My 7x11 Pyrex dish is anywhere but in my cabinet right now, so I became concerned that I didn't have exactly what I needed for the dessert. I remembered in the middle of the night earlier this week that I recently picked up a 7x11 cake pan for December's Buche de Noel recipe. Sometimes insomnia works in your favor, right? The cake pan would have to do.

Our first step is to grease the pan. Spray oil would normally be my go-to in this case, but since we're using butter in the recipe, and I wanted to ensure the whole shebang turned out just right, I used a pat of butter. I completely coated inside of the pan.

The next step was to count out 12 slices of bread and cut off the crusts. My patience for using a knife with which to cut off the crusts lasted for less than 2 slices and I quickly grabbed my kitchen shears and made quick work of the rest of the stack.

If your 1/2 cup of salted butter isn't good and soft by this point, give it 10 seconds or so in the microwave to ensure that it'll spread easily. If your butter isn't soft enough, you'll end up with torn bread. Coat the 12 slices of bread on both the front and the back with butter and cut them into quarters.

Our next step is to begin the layering of the bread pieces, beginning with one third of the slices.

Place the bread quarters in the bottom of the pan, and sprinkle all of the raisins over that layer.

Layer another third of the bread quarters over the layer of raisins, and set the pan aside.

Now comes the time to create the rich and creamy homemade custard that those layers of bread will soak up. Dear custard, we love you.

Grab two saucepans out of the cabinet. In one saucepan, we'll heat the milk and heavy cream, and we'll be using the other to create a double boiler for the egg yolks.

Pour 1 cup of whole milk and 1 cup of heavy cream to that first saucepan, and bring it to almost boiling over medium heat. Keep a close eye on the mixture to ensure that it doesn't boil. When it gets to the point just shy of boiling, pull it off of the heat.

Fill the other saucepan halfway with water and bring it to a boil over high heat. Grab a heatproof bowl and toss your 4 egg yolks and 1/2 of sugar right in. Combine the two.

Once the water in the saucepan begins to boil, turn the heat down just a bit so that it simmers. Place the heatproof bowl on top of the pan of boiling water, and whisk the yolks and sugar mixture.

Keep whisking until the point when dragging the whisk creates a clear path.

Once it gets to that point, remove the egg mixture from the double boiler/saucepan and whisk in the cream mixture. Look at us! We're making homemade custard! This is going to be magic when it's baked with the buttered bread and raisins. Pure. Magic.

Once the cream mixture and the egg yolk mixture are completely combined, pour two-thirds of the custard over the bread and raisin layers in the 7x11-inch pan.

After I had the two-thirds of the custard even dispersed, I set the timer and gave the bread 30 minutes to soak up the custard. You know me; having to wait isn't always what I want to do when it comes to yummy recipes, but you and I need to keep our eyes on the prize in this instance. Any time that bread gets to soak up homemade custard is going to be worth it. While you wait, go ahead and preheat the oven to 350 degrees.

From what I understand, when the Bread and Butter Pudding is ordered at Raglan Road, it comes with both a butterscotch sauce and a creme anglaise. The recipe in Chef Mickey doesn't include the recipes for the sauces, but never fear. I thought I remembered in the dark recesses of little-used facts that hang out in the back of my mind that melted vanilla ice cream can be a substitute for creme anglaise. One quick search on the internet confirmed this thought, and I grabbed my carton Breyer's Natural Vanilla out of the freezer and left a generous scoop in a ramekin on the counter to melt.

Food Network's Ina Garten recommends that the ice cream used as a creme anglaise substitute should be good vanilla ice cream, like Breyer's, so I knew we'd be a-okay. And I celebrated the fact that all of my hours of watching Barefoot Contessa ten years ago continue to pay off. Thank you, Ina.

When the 30 minutes is up, place the rest of the bread quarters on top of the custard-soaked pieces, pour the remaining custard over the top, and press them down gently into the custard. I used a spoon to coat the top pieces in custard just a bit. Pop that pan into the 350 degree oven and give it 30 minutes to bake, or until the top is golden brown and the custard is set.

While your bread and butter pudding is in the oven baking, stop and breathe deeply when that lovely warm scent starts wafting through your kitchen. It's the first indication that what you're making is going to be incredible.

I set my timer for 25 minutes just to check it, and while things were starting to get golden brown, I knew it needed just a few more minutes. After 30 minutes, the most delightful dessert emerged.

Friends, words cannot express how surprised and excited I was when I took my first bite of the pudding.

The top layer is toasty, and the bottom layers are rich, gooey and creamy. It's just perfect.

I poured the melted vanilla ice cream on top of my portion of pudding, and savored every bite. And, if you're raisin-averse, let me tell you that they added lovely warmth, sweetness, and texture to the dish. You need those little dried-up grapes; their role is important.

I had no idea what to expect from this dish. I mean it's bread and butter, a bit of sugar, cream and milk, and raisins; not ingredients that I normally associate with an over-the-top good dessert. But. It. Is.

Of course, if you'd rather, you can enjoy your pudding with non-melted ice cream and I'm sure that it would be AHH-MA-ZING.

I'm wishing you the best weekend. May this first weekend of Spring bring you a fresh breeze or two and more than just a bit of sunshine. And may Raglan Road's Bread and Butter Pudding bring you just a touch of Disney snack luck and magic.

Thank you so much for reading along!

Ready to bake up Raglan Road's amazing Bread and Butter Pudding? The recipe is below: