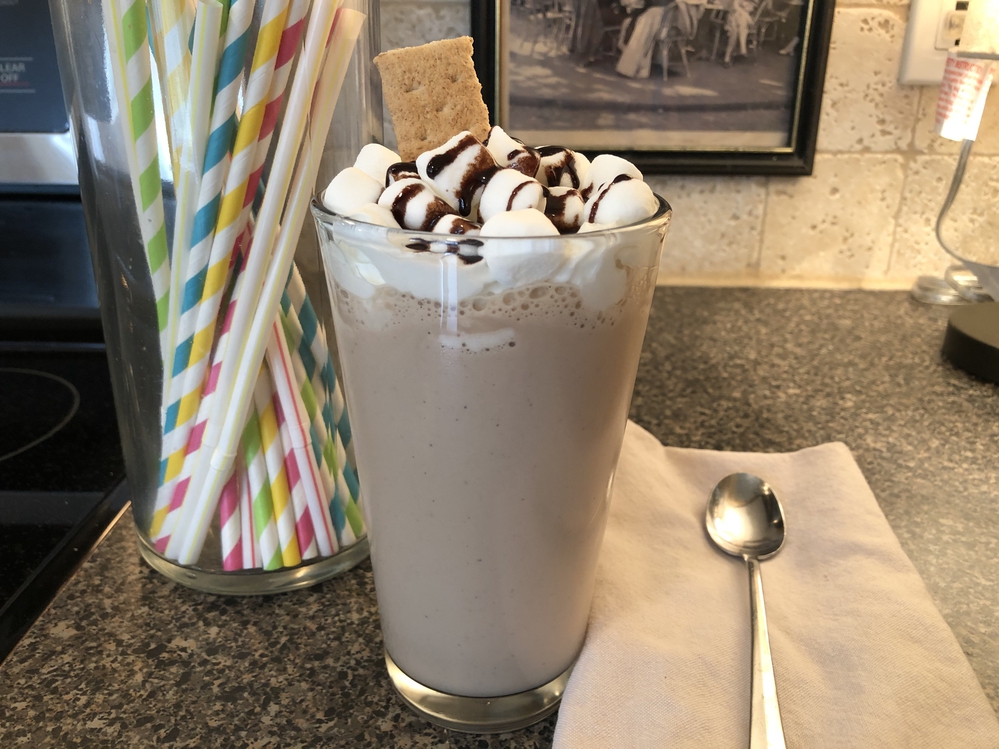 My love for s’mores is deep. Back in June, we made Joy’s More-is-More S’mores, and holy cow, was that dish good. It’s everything that someone who keeps emergency s’more supplies on hand would ever want: gooey, toasted marshmallows, rich chocolate, and graham cracker crumbles. Plus a layer of brownies. All in the comfort of your kitchen.

So, today? Let’s enjoy the classic taste of campfire s’mores in a milkshake. Well, technically, it’ll be a gelato shake. We get to be fancy today. We’ll be whipping up one of the gelato shakes that Disney Springs‘ D-Luxe Burger is famous for. Today’s snack is their S’mores Gelato Shake. Oh yeahhhh.

We’ll need a few ingredients that we may not normally have on hand for the gelato shake. And now that we’re using them today, we may wonder how we ever got through a week without them. The first on the list of “special ingredients” was toasted marshmallow syrup. I had to turn to Amazon for this one. Thankfully, with Amazon Prime and a little planning, it arrived to my house in just 2 days. Second on the list of special stuff was dark chocolate sauce. I had Hershey’s chocolate syrup on hand, but here in the world of Saturday Snacks, I like to try to stick to the recipe as closely as possible, so my faithful bottle of Hershey’s syrup just wouldn’t do. Walmart saved the day, as Torani’s Dark Chocolate Sauce was in stock. Our last you-may-not-have-this ingredient was vanilla gelato, which can be found at any grocery or big box store.

First things first: let’s get our teaspoon of graham crackers crushed and ready. I placed a full graham cracker in a baggie, and crushed it with the back of a spoon. Doing so yielded more than enough graham cracker crumbs. Measure out one teaspoon and toss it in your blender.

The first of our fancy ingredients now gets to take the stage: it’s time to pour out an ounce of the toasted marshmallow syrup. One ounce isn’t much, so keep a sharp eye on the measuring cup/shot glass/medicine cup that you’re using to portion things out. The syrup smells just like you’d think it would, and a little dab will do ya. Go ahead and pour your ounce of toasted marshmallow syrup into the blender.

It’s magic time. Grab that bottle of dark chocolate sauce, hold it in your hands, and dream of all of the marvelous possibilities. Oh the things you could drown in that lovely stuff. Okay…back to the task at hand. We need half an ounce (or 3 teaspoons) of the sauce, and, once you have it measured out, pour it into the blender with the syrup and graham cracker crumbs. And then pour another half an ounce into your mouth.

It’s now time for the star of the show: the creamy vanilla gelato. I popped the gelato back into the freezer while I prepped the other ingredients so that it stayed nice and cold. And since this was my second pint of gelato for this recipe, maybe I just didn’t want to mess around. It’s funny, but when you miss grabbing the grocery bag that contains a pint of gelato out of the car, and you don’t realize that you don’t remember putting the gelato into the freezer after the run to the store until 10pm THE NEXT DAY, you might have to go back to the store and purchase yet another pint of gelato. Just sayin’. Ahem.

Since we need 12 ounces of the gelato for the recipe, and the container holds 16 ounces, I eyeballed this step. While scooping out the gelato, I thought that 12 ounces sounded like an egregious amount of gelato for just one shake. But I continued on, and, as it turned out, 12 ounces was just the right amount. The chefs at D-Luxe Burger know what they’re doing.

The restaurant’s shakes are made with house-made gelato, but I have to say that the store bought variety was a-okay with me. Creamy, rich, and super vanilla-y (yep, that’s new word); it was perfect.

Hit that milkshake button (or whichever blender button’s your fave), and run it until the shake is combined and creamy.

The scoops of gelato needed a little coaxing from me, but once the blender blades caught the gelato, things combined nicely. This step always takes more time than I expect it to. Be patient; it’ll take a bit for the shake to reach the level of creaminess that you’d see in a restaurant-made version.

Once your shake has completely blended, pour it into a tall glass and top it with whatever you’d like. I went with the suggestions listed in the recipe and added a layer of whipped topping, 12 or so mini marshmallows, a quarter of a graham cracker, and, of course, a generous drizzle of our new best friend: the dark chocolate sauce.

Yep, it’s as good as it looks. Wait…it’s even better. This shake was gone in minutes flat. I sucked that thing right down. It was so very good.

Every flavor that you’d expect in a s’more was present. The shake was rich, creamy, and chocolatey, you could pick up just slightly on the graham cracker taste, and you were left with the taste of the toasted marshmallow syrup after everything was said and done. This shake is so good. I liked using the gelato as opposed to ice cream. It added a notable depth of flavor.

Friends, this is a good one. Quick, easy, and perfect for a Saturday afternoon. The shake isn’t currently on the menu at D-Luxe Burger, but in our own kitchens, it’s available any time we like!

Are you creating yummy Disney-inspired treats in your kitchen these days? If so, please share below. Have a great weekend!

Ready for a cool treat? It’s your turn to make the gelato shake! The recipe is below:

Click here for a downloadable version of this recipe.