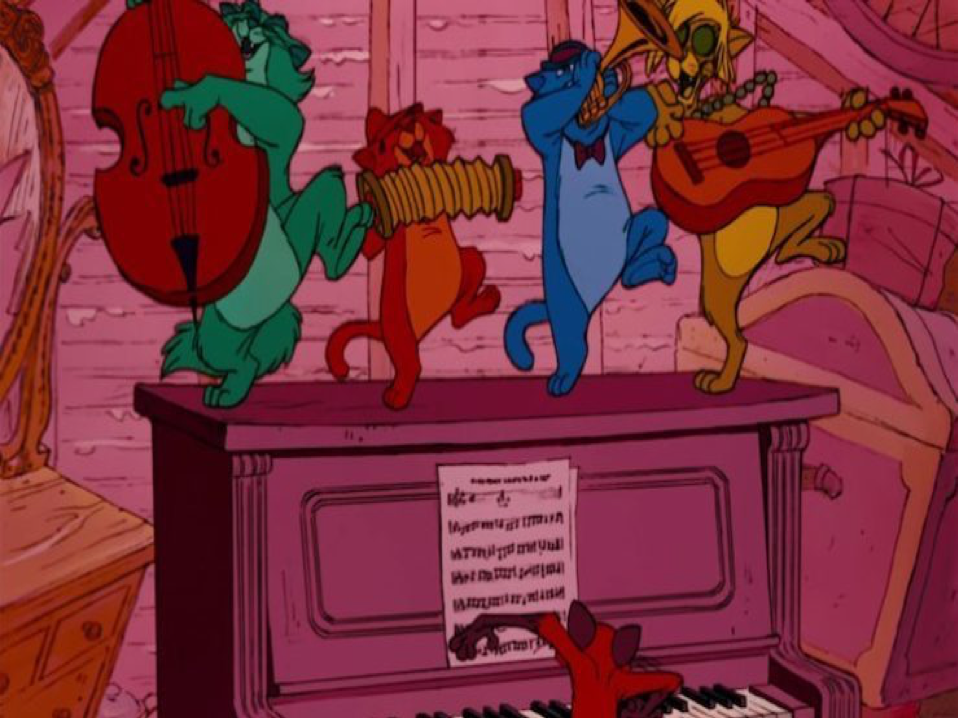 Since 2001, every April has been Jazz Appreciation Month (JAM), with April 30th serving as International Jazz Day. In 2003, through efforts by the National Museum of American History, JAM was supported by legislation. It has the goal of bringing attention to this genre as an important part of American culture in both the past and present, as well as continuing and fostering passion for this kind of music.

Jazz is a form of music we should absolutely appreciate and understand as a crucial part of the World of Disney. Artists such as Peggy Lee have been fundamental in helping to bring to life films both classic and contemporary. From the backdrop of the Jazz Age in The Princess and the Frog to “Zip-a-Dee-Doo-Dah” — which is now a key part of the experience on Splash Mountain — many singers and artists have enriched the films we enjoy, and their work and offerings should be thoroughly esteemed by all Disney fans. Who are some of these people, and what has Jazz contributed to the World of Disney?

Cliff Edwards, also known as “Ukulele Ike” was a very popular singer of the “scat” style, which involved heavy wordless improvisation, syllables, and other sounds to use the voice itself as an instrument. Starting in the nineteen-teens, he would combine scat and singing with his Ukulele which helped him become one of the most popular singers of the 1920s. Edwards became a massive celebrity on Vaudeville, Broadway, and film. It is at this point he caught the eye of the Disney Studios. In Pinocchio (1940) he provided the voice of Jiminy Cricket, singing “When You Wish Upon a Star.” While that song does not fit in the jazz category, Edwards certainly learned how to perform and insert emotion into his music early in his career.

It was the first song to win Disney an Oscar (Best Song) and was ranked the 7th greatest song in film history by the American Film Institute. It has also been wonderfully covered by those such as Louis Armstrong and The Dave Brubek Quartet. “When You Wish Upon a Star” serves as a tune utilized by the horn on the Disney Cruise Line, and has been used as an accompaniment to nighttime shows at Disneyland California and Magic Kingdom. It also often plays prior to various films, television shows, and specials. The song was composed by Leigh Harline with lyrics written by Ned Washington. Of note, Cliff Edwards also voiced Jim Crow in Dumbo (1941).

Louis Prima was a singer, band leader, and trumpeter whose style was rooted in a very traditional New Orleans style. Prima was a popular performer in Las Vegas beginning in the 1950s. He often blended sounds and words from his Italian heritage into his work. When the character of King Louie was being developed for The Jungle Book  (1967), Prima was seen as a perfect choice. He was known for being somewhat animated and unconventional when performing and delighted in the prospect of jumping around playing the part of an ape. He and his band would often intermingle with the audience as a finale and served as models for the scene in the Ancient Ruins. Prima sings “I Wan’na Be Like You.” The song was written by Richard and Robert Sherman, and also sung by Phil Harris, who played Baloo.

Phil Harris, born in 1904, was a popular orchestra leader and comedian for much of the 20th century. As a singer he had many hits, “That’s What I Like About the South“ and “Smoke Smoke Smoke that Cigarette” among them. Harris had a wonderful humor and pleasant demeanor. In Disney films, he had important roles in The Jungle Book (1967) as Baloo, The Aristocats (1970) as Thomas O’Malley, and as Little John in Robin Hood (1973).

Baloo sings “Bare Necessities” in The Jungle Book. This song was almost cut when Walt Disney took over supervision of the film; however, those working on the film were insistent and thankfully the song was kept. Thomas O’Malley sings “Thomas O’Malley Cat“ and “Everybody Wants to Be a Cat.” “Everybody Wants to Be a Cat” (pictured at the beginning of this article) is one of my favorite songs from any movie, also includes singers Scatman Crothers and Thurl Ravenscroft. Little John in Robin Hood sings “The Phony King of England” in a lovable role similar to Baloo.

If we would care to take a more contemporaneous turn, the aforementioned The Princess and the Frog (2009) shows a ‘Disneyfied’ version of the glamour of the 1920s and Jazz Age in New Orleans. It is a wonderful movie finally depicting a strong African-American Princess, and possibly helping to introduce future generations to a sometimes-overlooked facet of American culture. Another modern figure of this music scene who contributed to the World of Disney is someone who Orson Welles once described as “the most exciting woman in the world.” This is Eartha Kitt, the voice of Yzma in The Emperor’s New Groove (2000).

Eartha Kitt was born in 1927 in South Carolina, but she largely grew up in Spanish Harlem in the 1930s and 1940s surrounded by many Afro-Caribbean cultures, while also learning to be conventionally elegant through dance and elocution. Kitt masterfully combined these two worlds to have a presence on the stage which was elegant, seductive, and riveting. Eartha was fierce, and songs such as “Champagne Taste“ would lead some to believe she was a sort of cheap gold-digger. However, she always had a thirst for learning, and was fluent in at least four languages — and could sing in eleven. The singer was consistently involved in her community, and is a fabulous example of a strong, independent, American woman.

Her life is a great role model for many in a world where the pool of potential role models seems to be shrinking. It is absolutely a life worth learning about and emulating. Eartha Kitt’s singing style was primarily vocal jazz and cabaret. Today she is probably most known for playing Catwoman in the 1960s and for singing the song, “Santa Baby.”

One of her many hits of the 1950s, “I Want to Be Evil” seemed to foreshadow the role she would play for Disney — that of Yzma. Dale Baer, who animated the character, used Ms. Kitt as a model for the character. As she had been throughout her career, she was serious about her job, but was flawless in being over the top and wild in helping to create this character. In Kronk’s New Groove and The Emperor’s New School she continued these roles with an unrelenting flashiness and wonderful homages to her past as Catwoman. Eartha Kitt passed away in 2008, and for her role for the World of Disney provided a funny, crazy force of nature in the form of Yzma.

But if we wish to turn the clock back again, we can look to some early shorts done to see references to jazz. Mickey Mouse attempts his hand at roadside performance in The Jazz Fool (1929) to comical results. In Mickey’s Gala Premiere (1933), many celebrities of the time are respectfully but fabulously caricatured, such as Mae West, Ed Wynn, and Greta Garbo. But we also see musicians Jimmy Durante, Maurice Chevalier, and others who performed with jazz bands or were otherwise influenced by the music. The Silly Symphonies Music Land (1935) showed conflict between the Land of Symphony and Isle of Jazz with a beautiful use of instruments and stunning animation. In these three shorts, one can see a transition to sophisticated animation which was manifested into full-length films shortly thereafter.

From the earliest cartoons to 21st century blockbusters, jazz has enriched the World of Disney. Whether the music was overtly used, or the talents of artists lent in movies, it has helped increase the longevity of some films and increase the appeal of others. We have scratched the surface as to how jazz has impacted Disney film. We have not even mentioned Bing Crosby, songs like “When I See an Elephant Fly,” and musicians who have wonderfully covered Disney songs. Disney’s upcoming streaming service will supposedly totally open the vault. We’ll of course have to wait and see how this plays out, but it gives millions of people an opportunity to see these movies, which you may not have seen since childhood if at all.

The goal of Jazz Awareness Month is to ensure that an important part of American culture is remembered and appreciated. From the earliest films to the most recent, this music and its musicians have been essential to creating both the characters and films generations have come to love. Even if you have not seen Lady and the Tramp since childhood, you might hear a version of “He’s a Tramp” and recollect fond memories of your upbringing. As an adult you may find The Jungle Book a bit of a slog, but with the energy of Louis Prima and Phil Harris it can become a much more interesting watch. Talents and personalities that developed over decades, such as that of Mr. Edwards, only served to enhance the roles they played in the World of Disney. Learning about the lives of Peggy Lee and Eartha Kitt are guaranteed to teach you things about the United States, history, and the making of these movies that you may not have learned otherwise. It can only serve to enrich an appreciation of our shared heritage as Americans as well as our love of the World of Disney.

To learn more about Jazz, I highly recommend Jazz: A Film By Ken Burns.