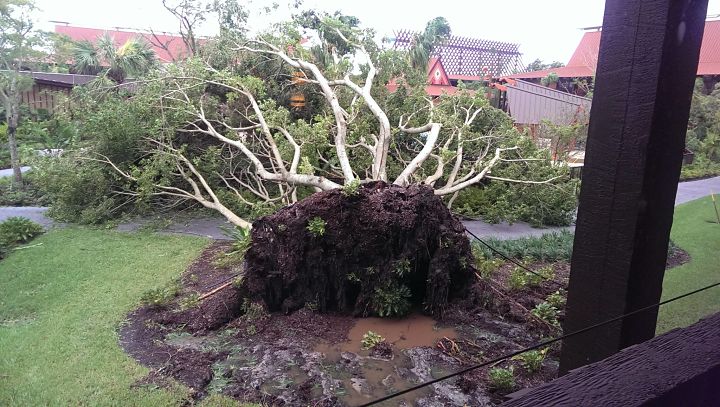 As the winds and rain slowed down from Hurricane Irma, many Walt Disney World Resort hotel guests woke up to branches, debris, and even fallen trees outside their rooms. Much of the reported damages so far are just trees and bushes.

With proper permission, we’ve collected some of the interesting sights from the resort hotels that guests have taken pictures of across social media.

On Facebook, one of our followers posted the picture above of the tree that had fallen outside their room at Disney’s Polynesian Village near the Polynesian East Pool. The tree has clearly blocked the pathway, and it may have done some damage to the fencing and the surrounding area of the pool.

Another view of the #damage at #Disney‘s Animal Kingdom lodge from #hurricaneirma https://t.co/3BVSRWZvnx pic.twitter.com/QRMkeVndft

Lastly, we are happy to report that Cinderella Castle is still standing and everything looks to be perfectly okay in the surrounding area. When more pictures and details from inside the park, if there is anything notable to see then we will report on that immediately.