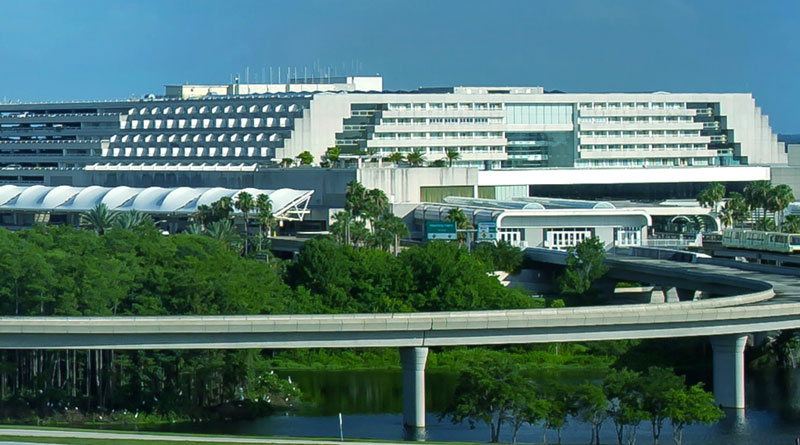 UPDATED: 5:13pm: The delays at Orlando International Airport are affecting Disney Cruise Line passengers as well. Official aboard the Disney Wonder commented that some travelers were having trouble making their flights from Orlando to San Juan, Puerto Rico, where the ship will dock tomorrow.

The Wonder is currently on a 7-Night Southern Caribbean Cruise, returning to San Juan tomorrow to begin a 4-Night Cruise to Port Canaveral.

“The incident that occurred at the Hyatt hotel impacted the east checkpoint which serves Airsides 2 and 4 (gates 70-129). Passengers were required to be rescreened as a security precaution but the airsides have reopened.

Passengers should expect delays as we work to resume normal ops. Please arrive early for any scheduled flights.”

UPDATED 12:45pm: Terminals 70-129 have been cleared and screening has resumed. Wait times are in the 2 hour range.

“At 9:30 a.m., an individual jumped from the Hyatt Regency Hotel into the atrium area of the airport. A male in his 40s was found in critical condition and transported to the hospital where he was pronounced deceased. Preliminary information suggests an apparent suicide.”

UPDATED 12:06pm: TSA officials have confirmed that the deceased was a TSA agent that had just finished a shift.

“The TSA confirms that an on-duty officer fell from a hotel balcony inside Orlando international Airport this morning and is deceased. Our thoughts and prayers go out to the officer’s family, friends and everyone in our TSA family.”

Security officials at Orlando International Airport (MCO) have closed a good portion of the airport, causing flight delays, after a person committed suicide by jumping from the balcony of the Hyatt Regency hotel located inside the terminal.

Following the incident, panicked passengers bypassed the screening area, forcing officials to close Terminals 70-129. Agents then had to deplane passengers, clear the area, and then restart the screening process. Terminals 1-70 were not cleared, however the effect was felt there as well with all planes arriving and leaving Orlando being delayed.

There had been no official information released regarding the identity of the deceased.

We will continue to update this story.

Orlando airport officials announced a “security breach” at @MCO. No flights have left or landed in the past hour. All passengers in Terminal A are being required to clear the terminal for a “security sweep” and return to the entrance to go through @TSA checks again. @WNCN @WFLA pic.twitter.com/cVtuJUILhx