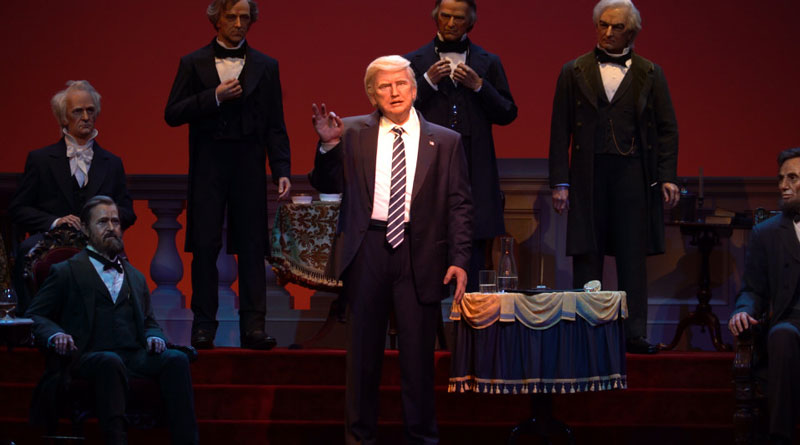 The newly reopened Hall of Presidents seems to have suffered its first major disruption related to the addition of President Donald Trump. One guest at a recent show began chanting the phrase “Lock him Up!” as the Trump animatronic began to speak, repeating the slogan throughout the President’s address.

After a renovation period filled with controversy and speculation, the Magic Kingdom attraction reopened on December 19th. The announcement of the opening, along with the details of what role Trump would play in the attraction, put an end to neither the controversy nor the speculation. Those sitting at every place on the political spectrum voiced not only acceptance or disapproval of the attraction itself, but also concerns over how others would react and what steps Disney would take to mitigate disruption.

It appears we now have our first example of a guest openly protesting the President’s animatronic on video. The guest in question had previously tweeted his planned attendance, asking followers for suggestions on what to throw at the animatronic.

Will be in Disney next week and def going to the #HallOfPresidents on my last day in the park. Taking suggestions on what to throw at Trump.

A video surfaced on YouTube from poster Ian R. which shows the incident from a separate angle.

While most of the crowd’s reactions are not easy to identify, at least one guest can be clearly heard shouting back, “He’s not real!” Neither video gives a clear impression as to what the aftermath of the event involved; Disney’s reaction and consequences to the guest are not yet public knowledge. This story will be updated as more information comes to light.