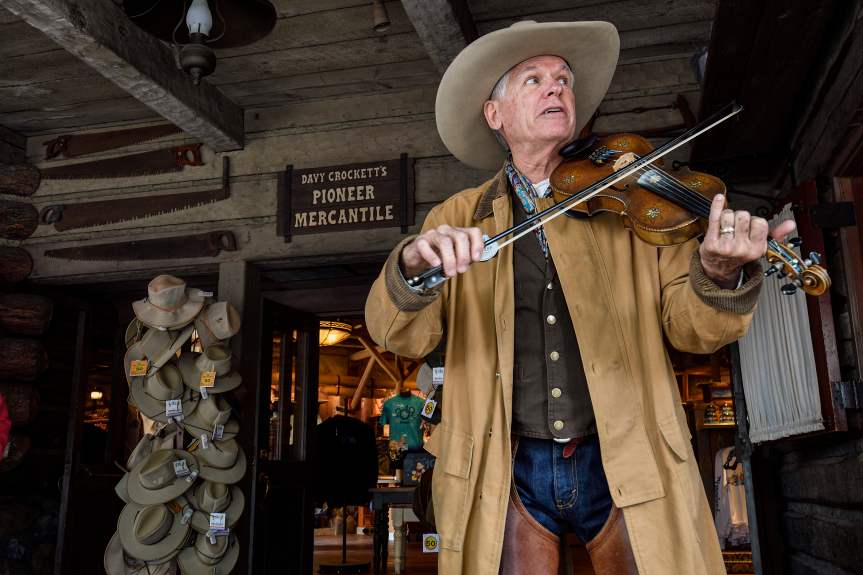 This weekend is your last chance to catch Farley the Fiddler perform outside the Pioneer Mercantile in Disneyland Park. Monday, Gary Francisco, 67, will retire after 50 years of portraying Farley.

Farley the Fiddler has been entertaining crowds in Frontierland for over 40 years, with Francisco working full-time for nearly 25 years.

Francisco first performed at Disneyland in 1978 as a member of the comedy jug band Montezuma’s Revenge. After he left the group, Disney asked him to audition for the Thunder Mountain Boys. While he didn’t get that job, when Big Thunder Ranch opened, he was hired to be the fiddle player there.

When asked about the character of Farley, Francisco said that we was “born” in 1972 when he joined Montezuma’s Revenge. He needed a stage name and “Farley the Fiddler really stuck.”

Francisco jokes that he’s “kind of a shy violinist.”

“But you put me on stage as Farley the Fiddler and it’s like I was free.”

After close to 40,000 performances, Francisco looks back on his career:

“…when I started here, I always admired Rod the piano player on Main Street. He was a legend at Disneyland. I never thought I would reach that status. But people say I have.”

Francisco feels he’s been popular with visitors because he’s been himself. He says that he wants to be remembered as a real person.

“I haven’t been fake. I’m just like anybody else. We’re all having fun together.”

Francisco says that, while he’s retiring from Disneyland, he’ll still be participating in education programs at schools near his home in Big Bear Lake.