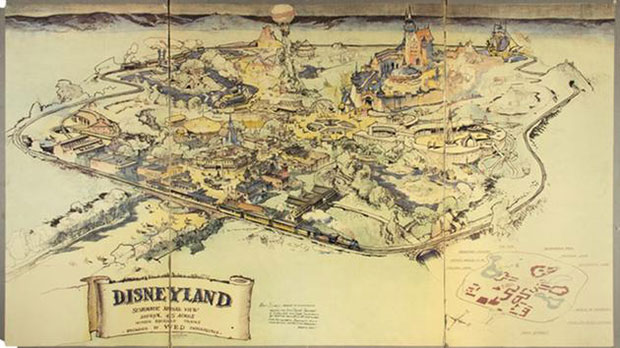 What is possibly the most important piece of artwork in Disney history has not only been found, but will soon be available for auction. California’s Van Eaton Galleries, a notable animation auction house often featuring Disney art, recently announced the re-discovery of Walt Disney’s original hand-drawn map of Disneyland.

The auction itself is titled “Walt Disney’s Disneyland” and will take place Sunday, June 25th at 11:00 am, and exhibition dates will be June 2nd through June 24th. Van Eaton Galleries will auction off nearly one thousand pieces from Disney, spanning 1953 to the present. These will include, “…original props, wardrobe, ride vehicles, and souvenirs. A highlight of this auction is Walt Disney’s first-ever map of Disneyland.” The map itself is estimated to go for $750,000 to $1 million, which would classify it as the most expensive Disney artifact ever auctioned.

“That an artifact like this, which is so deeply rooted in the creation of Disneyland, still exists today is astonishing,”said co-owner of the gallery Mike Van Eaton, “With the discovery of this piece, we have an item that Walt Disney created during a 48 hour period of hard work and imaginative genius, which succeeded in getting him the funding he needed to build one of the most successful endeavors of his career, and which he continued to personally use throughout the entire building stages of Disneyland.”

For more than 60 years the map has avoided auction houses and the public eye alike. Herb Ryman listened to Walt Disney’s intricate description of the park for two days, using what he heard to create a map for presentations to banks and television networks. What Ryman was probably unaware of, is that he was also beginning an artistic masterwork that would serve as the inspiration for countless ideas in art and theme parks. An enhanced version of this original first made it to the public in 1954, and served as the first look at what Walt Disney had in mind for Disneyland. The original found its way into the hands of Grenade Curran. Curran was a Disney employee at the time, and asked Walt if he could keep the map sitting in the corner of Disney’s office. While it is doubtful Grenade could understand the full significance that this work would have to fans and Disney historians in the future, he still kept it safe and stored away.

Whether we give our thanks to Walt Disney, Herb Ryman, Grenade Curran, or Van Eaton Galleries, one thing is for sure; this map is returning to a world filled with Disney fans who can’t wait to greet it with love and admiration.