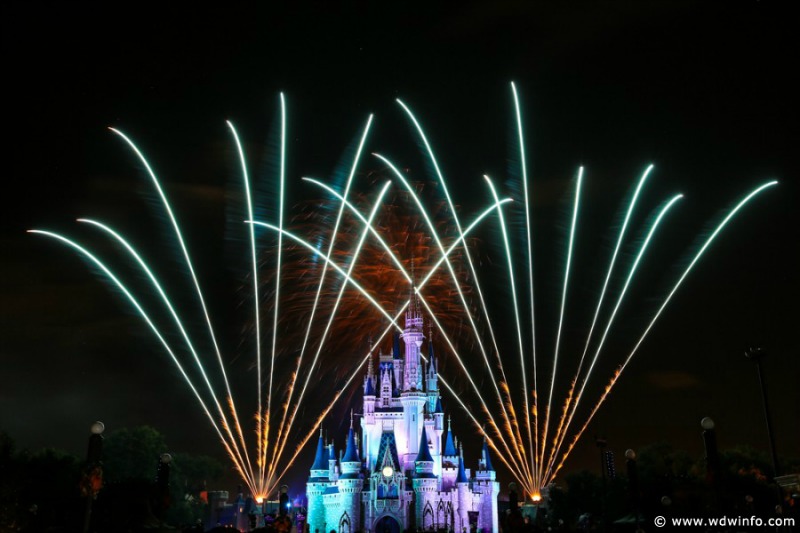 Back in February when we announced that ‘Happily Ever After’ would be coming to Magic Kingdom Park to replace the Wishes nighttime spectacular fireworks show, the reaction was very mixed. Disney fans everywhere have grown to love ‘Wishes’ as it’s been around for over thirteen years, and there were lots of comments made on social media to let the world know how sad they were.

Once reality started to set in and sneak peeks started getting shared of the making of the beautiful new show, folks started wondering if the new “fireworks” were going to be more about projections, with only scaled-down fireworks.

A thread was started on DISboards.com that contains a video showing some of the testing that went on during the night, and we thought we’d share what some of our posters had to say about it.

‘Hannahinwonderland’ says, “I absolutely love the music, and I’m so glad that Tinker Bell still flies. I’m gonna miss Wishes but this definitely seems like a suitable replacement.”

‘Michelleiada’ says, “I will miss Wishes also, and I was skeptical about whether Disney was trying to cut costs with using more projection and less fireworks but I should have trusted Disney. From what I have seen, this show will be absolutely amazing.”

Many posters were thrilled to see Tinker Bell in the most recent video that was shared, including poster ‘Twilight Sparkle’ who said, “I think I’ll love the new show. Count me in as another who is quite happy to see Tink will still be flying.”

It seems as though most of our posters are pretty excited to see what Disney has created for us, but alas, not everyone is thrilled.

Poster ‘baler31’ is not loving the singers and had this to say, “Not a fan of the lead voices. Like the orchestral arrangement but the singers lack the emotional maturity to carry the piece IMO. Casting directly from Disney Channel pool. Will reserve judgement until we see the whole thing but definitely find the voices grating.”

Another poster, ‘PrestonatorSR,‘ said, “I am not wowed by the singers, even though majority opinion would suggest they are ‘wow worthy.’ This version is not tear-inducing for me, but I’m glad that so many of you find it moving. IMHO it just doesn’t capture the ‘classic’ magic of Wishes–but I’m hoping I’ll like it more in person.”

With tonight being the last time Wishes nighttime spectacular will be presented, we’d love to know your thoughts on whether or not you think ‘Happily Ever After’ will be a good replacement. Let us know in the comments below or join the discussion, either on the boards by looking for the thread entitled “For all of you worried that Happily Ever After won’t be a good replacement for Wishes” or on our Facebook page.

Also, don’t forget that the Disney Parks Blog will live stream the first performance of ‘Happily Ever After’ on the front page of the blog beginning at 8:55 p.m. Eastern on May 12, 2017!