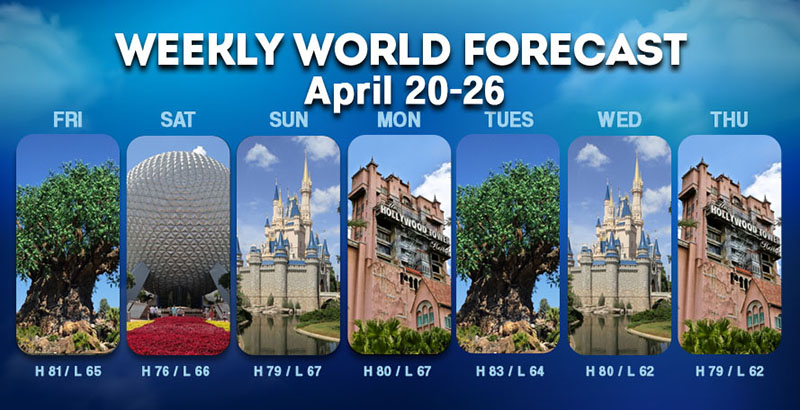 Saturday, April 21 – Saturday is supposed to be overcast, and while I love the Flower and Garden Festival at Epcot being bright and sunny, I really love Epcot even more on an overcast day. Epcot has a tendency to feel really hot and I always get a lot more sun there than other parks, but it’s not supposed to actually be raining. So today is the right day to do Epcot.

Sunday, April 22 – Sunday is the perfect storm in my opinion. It’s Earth Day, which is the launch of Animal Kingdom’s 20th Anniversary Party for the Planet event, which will attract crowds because it’s new. This weekend also has runDisney events happening. In my experience, the first two days of runDisney are the shorter races and people have more free time to visit some parks (because they only ran “pretty far” instead of “crazy far”), but they will probably hold off on drinking until Sunday after the final race, and most of that would be at Epcot. So runners will probably be at Magic Kingdom and Hollywood Studios earlier in the weekend. The weather will be terrible on Monday, so I will say to do Magic Kingdom on Sunday.

Monday, April 23 – As I said for Sunday, the weather is going to be very bad on Monday (as of this writing). Currently, the forecast calls for a 90% chance of thunderstorms all day long. Hollywood Studios is the best park to do in the rain. Most attractions and shows are indoors and the problem with rain isn’t just ride closures, it’s the fact that all the people who have FastPass+ for the closed rides can then use their passes somewhere else. So, if you don’t have a FastPass, then your wait times are going to grow exponentially because of the sudden influx of FastPass holders from other rides getting rained out. Monday’s pick is Disney’s Hollywood Studios!

Tuesday, April 24 – On Sunday, Party for the Planet begins at Disney’s Animal Kingdom. While I wouldn’t go the first two days it’s open, I would go on Tuesday. I found one Fastpass to Avatar Flight of Passage at 8:15 PM, which is enough for me to know that Animal Kingdom shouldn’t be as busy as usual. Plus, the Party for the Planet would be cool to do — just not the first day or two when it’s crowded. On Tuesday, locals will be back to work, Vloggers will have already reported on it and the hype will simmer a little bit. So go to Disney’s Animal Kingdom on Tuesday.