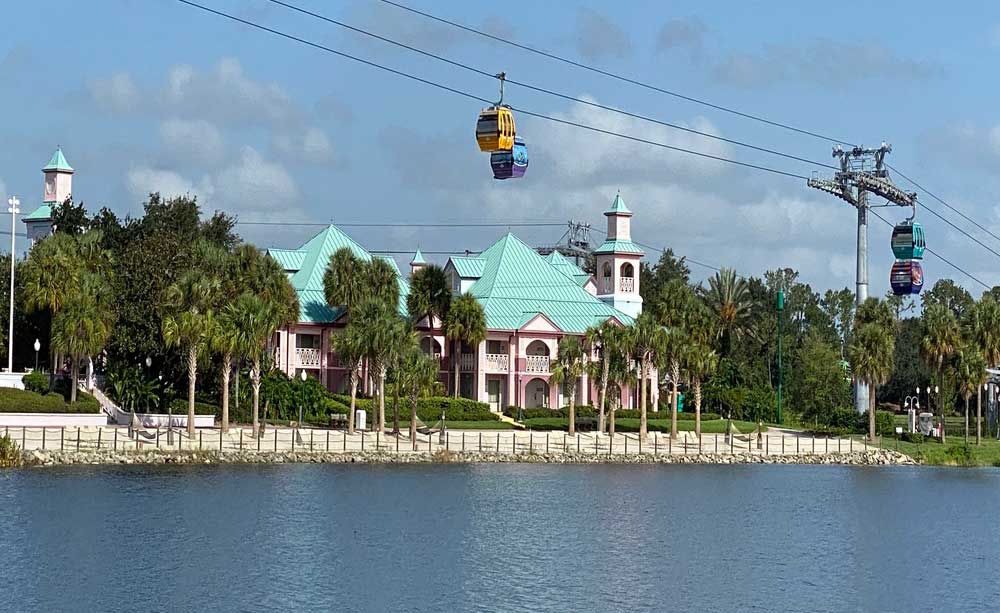 I recently had the chance to stay overnight at Disney’s Caribbean Beach Resort – the last Walt Disney World resort on my list for never having stayed there.

Before I get into all of the details of this particular resort, I’d like to share how much I think the theming of each of the Walt Disney World resort hotels as a whole matters when you’re deciding on where to stay during your vacation. The resorts are not necessarily themed around Disney theme parks, movies, or characters. Instead, some are inspired by various locations worldwide, with simple nods to Disney sprinkled throughout the property. For example, if you don’t like the look of the tropics, you might not want to choose Disney’s Old Key West Resort – even though it’s one of my favorites!

If you’ve ever been to a Caribbean island or seen photos of any of them, I’d be willing to bet that those images are full of brightly colored buildings and plenty of palm trees too. I’ve been to a few Caribbean islands, and that’s what I picture in my head when I think about my time there. So, when I arrived at Disney’s Caribbean Beach Resort, I was happy to see the beautiful and brightly painted buildings – it definitely felt like I was on a Caribbean island.

One of my favorite things about this resort is that it’s the HUB for the Disney Skyliner. I could see and hear those gondolas gliding overhead as I was on my way to my room, and that was so cool. In addition, the Disney Skyliner provides a fun transportation option to Disney’s Riviera Resort, EPCOT, Disney’s Hollywood Studios, Disney’s Art of Animation Resort, and Disney’s Pop Century Resort should you choose to do a bit of wandering during your stay.

Since I’d completed my check-in on the My Disney Experience app, I didn’t need to stop by the front desk to get my assigned room number as it was sent to me via text message. I’d noted that I’d be arriving at noon, and although rooms are not guaranteed to be ready until 3:00 p.m., I received my “room ready” text message just before noon, which was fabulous!

I recommend that you, even if you don’t have to, visit the beautiful lobby of this resort if you happen to be staying there. Centertown Market is a great place to grab a quick bite to eat. Sebastian’s Bistro, the resort’s table service restaurant and Banana Cabana Pool Bar are located just outside as well. I’ll tell you more about my dining experience there in an upcoming article.

When I walked into my room, I was pretty surprised by how much room there was in there. I had a King room, and with only one bed instead of two, there was plenty of space to spread out. Another nice feature about this room, in particular, was that it was on the corner of the building, so there were two windows instead of just one.

After looking around for a few minutes, I realized that this was an accessible room which explains the large amount of space. I didn’t request an accessible room, but sometimes one is assigned. If I had an issue with it, I could’ve asked to be moved into a different room, but this one was just fine with me.

While the furniture in the room was only a few years old, the room itself could definitely use a makeover. I am used to seeing a place to hang clothes in the restroom area of most moderate resort hotel rooms, but this one did not have that. Instead, there was an armoire with shelves and a small space for hanging clothing.

The two nightstands and the sideboard all had built-in USB outlets, but out of six total, only one worked. I was so sleepy the night before that when I plugged in all of my devices, I missed that they were not actually charging before I fell asleep. Waking up in the morning to 3 nearly-dead devices is not my favorite way to start the day. Ahem…

Speaking of not a great way to wake up, I sadly did not have a good night’s sleep at this resort. The mattresses are not the best quality, at least that was the case in my room. When I crawled into bed, I could easily feel a dip in the mattress from wear and tear, so I had a feeling it was going to be rough. I woke up so many times that night that I lost count. However, I will say that while I’m used to my Tempur-Pedic at home, the mattresses at Disney’s Deluxe Resorts and Disney Vacation Club villas have always provided me with a great night’s sleep.

The category of your resort choice can make all the difference in the world during your vacation, even if all you do is sleep there. A word of advice is to not only keep in mind the resort’s theme but amenities in your room such as mattresses and towels come into play as well. My back was a mess for nearly a week after a one-night stay, and you don’t want that because there is a lot of walking to do at Walt Disney World.

It’s also important to note that the “refrigerators” in the room are kept at 41 degrees Fahrenheit and are not actually considered refrigerators; they’re called “coolers,” so if you’ve got medication or anything that needs to kept cooler than that, you’ll want to inquire with the front desk on storage options. There was a mini coffee brewer in my room made by Cuisinart, and it used special coffee pods provided by housekeeping. Also, there is no microwave.

While one of the biggest complaints I’ve ever read about this resort is that it’s so huge, I found it rather cozy. There are plenty of bus stops all over the property, so whichever section you end up in, you shouldn’t have too far of a walk to get to the complimentary bus transportation or the Disney Skyliner. Due to the size of the resort, an internal bus is also offered which makes it handy to hop on a bus to Old Port Royale or another stop within the property.

Have you ever stayed at Disney’s Caribbean Beach Resort? I’d love to hear your thoughts about your stay and whether or not you’ll stay there again!